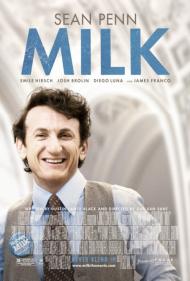 Harvey Milk was the first openly gay man elected to public office in the United States. Unfortunately he was assassinated just one year after being elected as a San Francisco Supervisor in 1977. Mayor George Moscone was also shot and killed by disgruntled San Francisco Supervisor Dan White. Milk tells the story of Harvey’s arrival in San Francisco from New York City in the early seventies and his awakening as a social and political activist.

Gus Van Sant does a remarkable job of recreating the funky look and vibe of the nineteen-seventies. He uses old news clips to add to the realism. Most effectively with Anita Bryant. The orange juice hawking former beauty queen who demonized gay men and actively tried getting them fired from teaching jobs and also campaigned for Proposition 6 which would have denied homosexuals equal protection in jobs and housing. In one clip she warns against “An evil that will come disguised as something good,” while irony drips from the screen.

Sean Penn is spellbinding. You actually forget who he is because he so completely BECOMES Harvey Milk. Many straight actors have played gay before but none better or more wholeheartedly than Penn. For one thing, although there are some kissing and nudity, this movie is not sexual and Milk was not a swishy queen. Penn plays gay as an everyman which is exactly who Harvey Milk was. Just a regular citizen who got involved with politics and happened to be gay.

The entire cast is superb. But who would have predicted that Josh Brolin would turn out to be one of the most talented actors in movies today? I truly hope the Academy recognizes this wonderful movie come February. Don’t miss it. 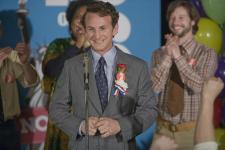 Somehow, I will bet that the real Harvey Milk was more charismatic than this too bland portrait of him.

This movie is getting raves and Sean Penn's performance is getting raves. Am I the only person who thought he plays Harvey like a limp-wristed gay caricature? His voice and his mannerisms are all pitched to say, "I'm playing this gay." Maybe, I thought, that's how the real Harvey Milk was, so I looked him up on YouTube. Nope, the real Harvey Milk sounded much more like a real person than a stereotype. Give him a listen for yourself.

As for the movie itself, I found it to be as bland as, well, milk. It's pretty much your standard biopic without anything really special about it. If it weren't for Harvey being gay, if he were campaigning for some other less fashionable or timely cause, I doubt that this movie would be getting any attention at all.

I do agree that Josh Brolin does an outstanding job, but an explanation for his character's motivation is never presented to the audience. He is left as an enigma and is subsequently more interesting than Milk, whose character and motivations are plain to see. I have a feeling the real Harvey Milk was more three-dimensional than the likable, but saintly persona he is given here.

I also agree that the look and feel of the 70s is recreated well. The production values are first-rate, which is important, but they alone can't carry a movie.

Patrick, this is one we're going to have to disagree on. The real Harvey Milk might have been a colorful, charismatic and interesting person. This movie was not. I seriously think that this is one of those movies that is getting rave reviews in part because people don't want to be accused of being homophobic.

This movie gives you dates, but little motives?

Harvey Milk was fighting against a woman who was trying to tell people what to think, by trying to tell people what to think. Does no one else see the hypocrisy here? I do not support discrimination, but I also do not support anyone shoving their opinion down someone else’s throat. Bryant said gays should not be teachers, while Milk had gays boycott businesses that he did not feel were friendly enough to homosexuals. Whether it is a Bible thumper or a gay activist, most people just want to have their own opinion, and since this is America, I think we still have that right. There is a brief scene where a passerby, this may have been a vintage clip or a filmed one, sums up what I believe is most of the public’s opinion, “You do what you want in the privacy of your own home. Don’t tell me I gotta accept it in mine.” Most people are too concerned with their own sex lives to be bothered by someone else’s.

Although I respect Harvey Milk for his convictions, I did not care for this movie. Lots of time is spent on Harvey and Scott’s relationship but it never goes into any depth. They meet and have sex. They become a couple and Scott breaks it off years later because of Harvey’s politics. They never even said they loved each other. What was their relationship based on? I also wanted to know more about Dan White. The movie is very vague about why he killed them. Harvey suggests, at one point, that he might be a closet homosexual, but there is never a legitimate reason for the murders. Whoever wrote this really needed to talk to his wife.

Milk is nothing more than politically biased, agenda filled film. It fails as a biography because the characters are never explored. Why would Harvey take up with such an oddball like Cleve? What was Dan’s problem? Was it really Harvey’s time spent on politics that sent Scott packing? Milk is nothing more than a social studies movie on the gay movement in America.