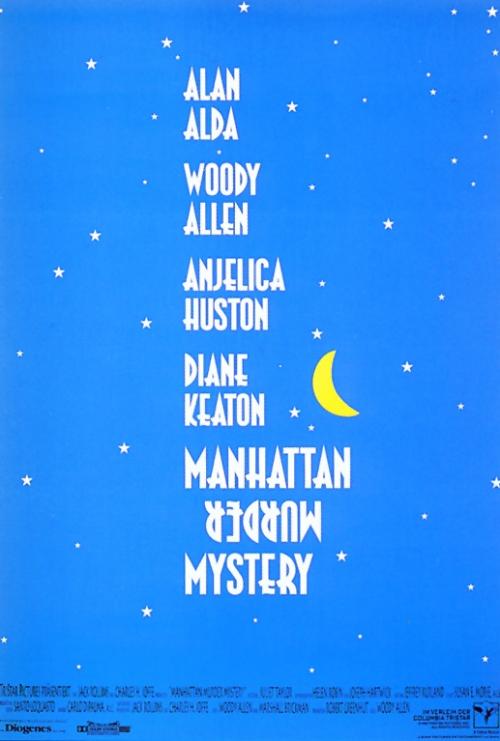 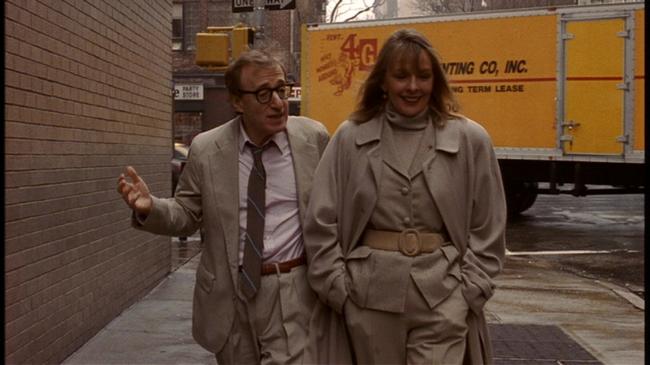 Woody Allen is a fan of old detective films and it shows in Manhattan Murder Mystery as he makes references to some and even features visits to theaters showing the classics Double Indemnity (1944) and The Lady from Shanghai (1947). Allen started writing this script in the 1970s but shelved it to work on other projects. He eventually finished it, with the intention of it being another project with his wife of the time Mia Farrow. However, his affair with his adopted daughter came out, prompting Farrow and Allen to become separated. Allen replaced Farrow with Diane Keaton and began filming all the while going through well publicized custody hearings.

Allen and Keaton play Larry and Carol Lipton, a married Manhattan couple whose son, Zach Braff in his screen debut, is off at college. Shortly after meeting an elderly couple that lives next door, the wife dies. Because her husband does not act distraught, Carol suspects that their neighbor killed his wife. Carol gets encouragement and advice from an old friend, Ted, to investigate her neighbor.

Whereas Carol is all too eager to play Nancy Drew, Larry is skeptical and fearful. Carol's enthusiasm and Larry's nonchalance provides the film's charm. Carol asks Larry, "I don't understand why you're not more fascinated with this! I mean, we could be living next door to a murderer, Larry." He responds, "New York is a melting pot! I'm used to it!" Things get even better when Larry starts to see Carol's points and joins in, trying to discover the truth. Add a twist and several Alfred Hitchcock nods and you have a fun watch.

A side plot involves Carol and Larry having not-so-secret admirers. Ted wants Carol while Larry, an editor, is being pursued by a writer, Marcia. It makes for more rounded characters and some personal issues. It also adds to the fun, especially when they start to help solve the mystery. I never knew where the plot was going and was glued to the screen, waiting to see how it would all play out. For a comedy, the suspense continuously builds.

The highlight of all Woody Allen films are his one liners and he has some good ones here. One of my favorite being, "My life is passing before my eyes. The worst part about it is that I'm driving a used car." Manhattan Murder Mystery is one of Woody Allen's more delightful and accessible comedies. 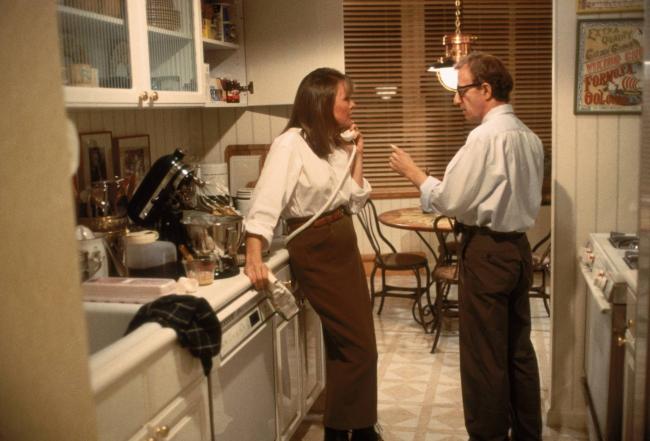 Nearly everything written about this movie includes a reference to Allen's well publicized breakup with Mia Farrow, which was still filling the tabloids during its filming. Nearly 25 years later it's much easier to separate the film from Allen's personal life. The biggest effect their split had on this film is that, as Eric mentioned, Diane Keaton replaced Mia Farrow as the female lead, which works to the film's benefit. Keaton is funnier and a stronger presence than Farrow. Farrow is funniest when she plays ditzy, as she did so well in Allen's Radio Days, while Keaton plays neurotic better than almost any actress. She's able to go toe-to-toe with Allen and they have an easy camaraderie that makes them a believable long time married couple.

One of the film's greatest strengths is that it really does keep you guessing, and as Eric said, the suspense builds throughout the story. At first it's not even apparent if a crime has been committed. Maybe Keaton's character, Carol, is just bored and imagining things. Then, the circumstantial evidence begins to mount until it's clear that something is going on, but what? Allen's Larry stands in for the audience as he remains skeptical through most of it, only joining in playing detective when he senses his wife's interest in another man. This all leads up to the film's funniest sequence when Larry and Carol visit a seedy hotel and end up trapped in the dark in an elevator, leading Larry to proclaim, "Claustrophobia and a dead body - this is a neurotic's jackpot!"

Allen has used death and murder in many of his films, but this is his most successful use of those devices in a comedy. As Eric mentioned, the film includes a few of his trademark one-liners, such as my favorite, "I can't listen to that much Wagner, ya know? I start to get the urge to conquer Poland." However, he never lets the humor overwhelm the tension or the mystery, even in it's most absurd moments. Larry and Carol are stock Allen characters, but they feel like real people. The script was co-written by Marshall Brickman, with whom Allen had previously collaborated on Sleeper (1973), Annie Hall (1977), and Manhattan (1979). Given the quality of all four of those movies, it makes me wish they'd collaborated more often.

Although Allen isn't known for artistic directorial flourishes, he makes a few unusual choices on this film. The camera work is mostly done on a handheld rig which keeps it nimble and results in quite a few extra camera moves. This is noticeable in scenes like the one where Carol is hiding in the neighbor's house when the neighbor comes home and the camera follows the two of them as they move around the apartment. There's also an Altman-esque quality to the way the dialogue is spoken. Larry and Carol often speak over each other's lines and around them, making their conversations seem even more natural.

Eric called this an accessible comedy and that's true, but fans of classic Hollywood mysteries are likely to enjoy it most and the many tributes and Easter eggs Allen includes in the film.

As a movie fan I'm glad Diane Keaton replaced Mia Farrow. Farrow has her charms but as Scott mentioned the natural camaraderie Keaton shares with Woody is palpable and they certainly create great comic chemistry together too. This isn't surprising since Keaton had starred in six Woody Allen movies back in the 1970s, including two of his most successful films, Annie Hall and Manhattan. Mia Farrow had replaced Keaton as Allen's muse beginning with the forgettable A Midsummer Night's Sex Comedy in 1982 and lasting until their hugely publicized divorce.

This was a fortuitous cinematic reunion. Manhattan Murder Mystery was Allen's funniest comedy in years and it ushered in a nice streak for him in the 1990s that included Bullets Over Broadway (1994), Mighty Aphrodite (1995), Everyone Says I Love You (1996) and Deconstructing Harry (1997).

This movie is nothing more than a good old fashioned farce centered around a mystery. Allen mentions wanting to watch a Bob Hope movie on television early in the film and Manhattan Murder Mystery is just the type of movie Hope made back in the 40s and 50s. Woody Allen's cowardly, wisecracking persona owes a huge debt to Bob Hope and Allen has never been shy about acknowledging this fact.

What stood out for me the most watching it this time was something Scott touched upon. The nearly constant camera movement and sometimes overlapping dialogue are techniques Allen rarely employs, giving Manhattan Murder Mystery a slightly different look and sound than most of his films. This adds to the frenetic energy of the piece, especially during those scenes where Allen and Keaton are together.

Manhattan Murder Mystery ranks among the dozen best movies in the prolific Woody Allen's ever growing body of work.