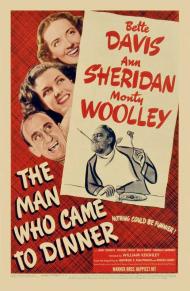 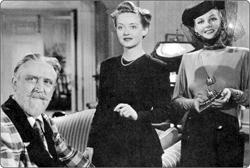 Monty Woolley, Bette Davis and Ann Sheridan in The Man Who Came to Dinner.

Sheridan Whiteside is a famous radio personality who hurts himself at a fans house. He then stays at the house in a wheelchair with his assistant Maggie, and a nurse he constantly picks on, "Nurse, will you take your clammy hands off my chair. You have the touch of a love-starved cobra."

Over the course of a Christmas holiday, Whiteside infuriates his host by advising his host's grown daughter to run off with her boyfriend and her brother to run off to travel the world being a photographer. He invites a gold digging actress, Lorraine, and a Hollywood comic to visit. Made in 1942, The Man Who Came to Dinner drops lots of, then, famous names and pop culture references such as Deanna Durban, Gone With the Wind and even a phone call from Eleanor Roosevelt.

Maggie's boyfriend, Bert, has written a great play and Lorraine wants the lead role. Maggie tries to get rid of Lorraine while Lorraine goes about seducing Bert. Meanwhile, Whiteside is really not hurt but just pretends to be because he loves all of the attention. To add even more havoc to the house Admiral Byrd keeps sending him odd animals like a squid and some penguins who bite the nurse.

Although there are some physical antics, such as capturing someone in a mummies coffin, it is the one-liners that make this movie good. One of Bette Davis's best line is, "You know, Sheridan, you have one great advantage over everyone else in the world. You've never had to meet Sheridan Whiteside." But the single greatest line belongs to the ever suffering nurse, "After one month with you , Mr. Whiteside, I am going to work in a munitions factory. From now on , anything I can do to help exterminate the human race will fill me with the greatest of pleasure."

The Man Who Came to Dinner is a comic gem! 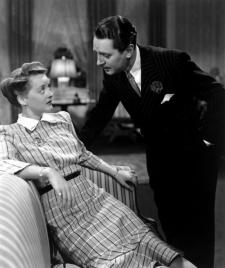 Absolutely a comic gem! This is the type of smart, furiously paced, nonstop laugh fest that no one seems to be able to write anymore. The many characters have their own separate storylines going on but everything ties in together beautifully. This movie has brilliant editing and a script filled with memorable zingers. One of my favorite lines is when Whiteside tells the nurse to “go read the life story of Florence Nightingale and learn how unsuited you are for your chosen profession.”

The supporting cast of players is impressive. Billie-“are you a good witch or a bad witch”-Burke perfected the role of the dizzy housewife, Ann Sheridan plays a bitchy actress and has a great moment at the end of the movie when she gets trapped in an Egyptian sarcophagus, Jimmy Durante is a manic ball of energy with a Brooklyn accent, and Mary Wickes, who seemed to always get cast as either nurses or nuns, is great in her movie debut.

One character that Eric didn't mention that I love is Miss Stanley, the sweet old maid aunt. She flits around the house showing old photographs to Sheridan Whiteside, before scampering up the stairs, she even has her own theme music. Of course she turns out to be an infamous axe murderer, ala Lizzie Borden.

Bette Davis was at the absolute peak of her career at the time she made this movie. And although she is top billed it is definitely a supporting role. Obviously she knew a great script when she read one, and ever the professional, she was more than happy to be a part of this great comedy.

The Man Who Came to Dinner is to Christmas what Arsenic and Old Lace is to Halloween. Both are uproariously funny movies that celebrate a holiday. 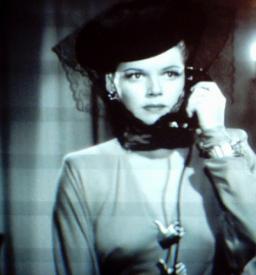 Ann Sheridan in The Man Who Came to Dinner.

The Man Who Came to Dinner is based on the hit play by George S. Kaufman and Moss Hart. They wrote it for and based the character of Sheridan Whiteside on their friend Alexander Woollcott, noted critic and member of the Algonquin Round Table. The character of Beveryly Carlton they based on Noel Coward while Banjo is based upon Harpo Marx. During one L.A. production Woolcott actually played the part of Whiteside while Harpo played Banjo.

Sheridan Whiteside is a terrific character. He manages to be completely rude to just about everyone and yet somehow still remain likable. He delivers rapid-fire zingers like he's shooting them out of a machine gun. Like you Patrick, I loved the Florence Nightengale line and also this one, "My great aunt Jennifer ate a whole box of candy every day of her life. She lived to be 102 and when she'd been dead three days she looked better than you do *now!*" He's childish, egotistical and often quite vile, but also quite hilarious.

His character is unusual for the time. In an era when the Hay's Code was strongly enforced, illegal and immoral behavior always had to be punished by the film's end, but Whiteside, while not a criminal, gets to behave quite badly and get away with it. I also have to note that in one scene near the end, Ann Sheridan's nipples also flaunt the Film Production Code by making an appearance through her shirt (Sorry, but I noticed them, so I had to mention them).

Given her status at the time and her top billing, I was surprised by Bette Davis' supporting role status. I thought that because of her star power, they might try to increase the size of her part, but she seems happy to play the part of Maggie and play it well. She's one of the few actresses of that period that I can think of who could believably stand-up to Whiteside. It's no wonder he didn't want to lose her.

The only problem with the movie is a small one and it's a common one for stage-to-screen adaptations and that is that almost nothing was done to take advantage of the fact that it's now a movie. It's really just a filmed version of the play. Only a tiny handful of scenes are filmed outside of the one room.

This is fast paced and very funny and yes, I agree, it is a comedy jewel.