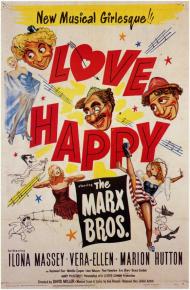 As one legend's career comes to a close, another's begins.

Although not the funniest of the Marx Brothers films, Love Happy is extremely significant in their career. First and foremost is that this is the last Marx Brothers film.  They would all continue performing but mostly on television.  In Love Happy, Groucho only shares one scene with Harpo and is never in the same shot as Chico.

Groucho plays a detective who narrates a story about some stolen diamonds that end up at a Broadway play's rehearsals.  Harpo wrote the story this is based on and as such, he has the most screen time.  In the film's funniest scene a femme fatale and her henchman abduct Harpo to find out where the diamonds are.  Of course Harpo's gimmick has always been that he never talks.  The goons torture him in many diverse ways but he never breaks his silence.

Vera Allen and Paul Valentine play the stars of the musical.  They each perform several dances.  Likewise, Chico plays the piano and Harpo plays a harp.  They were always the weakest moments in all the Marx Brother's films but they kept the tradition going until the end.

Of course Groucho gets in some good one liners.  When an assassin comes into Groucho's office and tells him, "You will be dead in five minutes."  Groucho responds with perfect timing,  "Huh! For your information, my doctor gave me three years to live, and I don't intend to make a fool out of him."  When trying to get a part on the show Chico says to Valentine, "I no like-a to brag, but the thing I'm-a most unknown for is-a mind-reading. I give you demonstration. You're thinking of something."

The film was produced by Lester Cowan and Mary Pickford.  The opening screen announces this as a "Mary Pickford Production."   She had produced some three dozen films in her career, with this being her last.

Oh yeah, there is also another famous blonde attached to this film, Marilyn Monroe.  In the credits she is listed under "Introducing" as if this is her film debut.  It is not.  She had appeared in several tiny roles before.  She only has one scene in which she walks into Groucho's office and complains that men keep following her.  Groucho looks her up and down and comments that he can't imagine why.

Although produced by Mary Pickford, the film contains plenty of sexual innuendoes.  When Harpo stares at a dancer, Chico says that he can read his mind and that he is thinking the same thing he always thinks.  At another point Chico gets turned on by the the femme fatale causing his hat to get an erection.  When Groucho starts to frisk her he starts down low and works his way up, stopping with both his hands just below her breasts.  He then looks at the camera and says, "If this were a French picture I could do it."

The Marx Brothers were a unique comedic act in Hollywood.  This marked the end of their career together as well as Pickford's professional career.  It also ushered in the decade of Monroe and introduced the man who would be remembered for such television characters as Ironsides and Perry Mason, Raymond Burr.