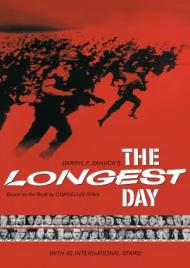 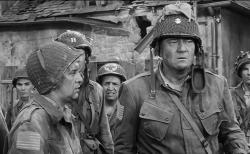 John Wayne in The Longest Day.

The Longest Day is one of the most important war movies ever made. It is definitely one of the largest in scope. An allstar cast fills many different story lines that celebrates the heroism of one of the most historically important days of the 20th Century.

On June 6th, 1944 the largest armada this planet has ever seen crossed the English Channel. Allied forces from many different countries landed and parachuted into Nazi occupied France. More ships, planes, men and tanks were used on that day than on any one day before or since for a single battle. This was D-Day.

The cast ranges from veterans like Henry Fonda and John Wayne to rookie actor at the time Sean Connery. Look closely and you can see George Segal climbing up a cliff. Even future Family Feud host Richard Dawson has a bit part. One of the few females in the movie is the gorgeous Irina Demick. Her role, as a member of the French resistance, is small but you will remember her. Man, she looks good on that bike.

I find Robert Mitchum's performance to be quite striking. He is one of the few big stars who is actually on the beach during the landing. His character, General Corta, witnesses many soldiers get killed. To inspire his men he gives them the following speech, 'Only two kinds of people are gonna stay on this beach; those that are dead and those that are gonna die. Now get off your butts. You guys are the Fighting 29th.'

John Wayne, as well, has a good line. He is addressing his men and in true tough guy mode tells them that, 'You can't give the enemy a break. Send him to hell.' I have liked that quote since I first saw this movie as a kid. With Wayne's delivery it still impresses.

The Longest Day was directed by several different people. Two scenes always stand out whenever I watch this movie. The first one is when the fat German soldier is bringing morning coffee to the men in the pill boxes on the beach. He rounds a bend and looks out to sea. As far as his vision allows him, all he can see is Allied ships. He is scared and confused. Moments later the ships begin firing.

The second scene is when the French forces run through a city. The scene is shot from the air. You have this amazingly choreographed long scene of these soldiers running through a town as they are getting shot at. It is one continuous shot without any editing!

From huge battle scenes to intimate moments The Longest Day keeps the emotions coming. There is the scene of Red Buttons hanging by his parachute on the bell tower as he watches his comrades get slaughtered. There is the momentary peaceful conversation between Richard Burton and Richard Beymer. I even get my emotions confused when the American soldier machine guns some German soldiers off screen. He then turns to a buddy and asks, 'I wonder what bitta, bitta means?'

This movie encompasses so much. It is historical. It is exciting. It is sad. Mostly, it is triumphant. Thanks to this movie, and ones like Saving Private Ryan, the men who fought and died that day will never be forgotten. 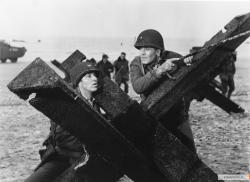 Henry Fonda in The Longest Day.

Eric and I rarely see eye to eye on things, but like Bill Clinton and the Bush's at the recent WWII Memorial ceremony, this movie is 100% bi-partisan. Besides that The Longest Day easily ranks as one of the half-dozen best war movies ever made. It is told from so many different points of view and perspectives that nearly every scene introduces new characters and situations. The story covers from the evening of June 5th, through the long overnight hours, the attack at dawn, and the following climactic events of the day. It is done in a quasi-documentary style that is aided by the stark black & white cinematography and by the fact that brief shots of actual historical footage are occasionally blended into a scene. Also adding to the realism is the fact that the French and German characters - except where it makes sense for them to speak English- converse in their native tongues, underscored with subtitles.

This is undeniably one of the greatest all-star casts ever assembled for one picture and yet there really isn't a star character. Because of the constantly shifting focus of the storyline all of the players are really doing cameos or extended cameos; some of whom you visit repeatedly and others you only encounter once or twice. It is brilliant, and really the only way to tackle a story this monumental in both scope and subject matter.

I don't know which of the credited directors helmed the ariel scenes of the battles on the different Normandy beaches but they are awe-inspiring. The camera pans overhead as the soldiers gallantly storm the beaches. Some are gunned down or get hit by explosions as others rush forward to take their places. In the background many more ships are approaching the shore and hundreds of soldiers are wading through the surf. What makes this scene even more impressive is the fact that everything you see is real: the men, the planes, the ships - the tanks rolling off the ships. The urban battle scene that Eric mentioned is truly amazing. It is one of the most technically perfect tracking shots I have ever seen. It brings to mind the iconic shot of all the wounded soldiers from Gone With the Wind. It gives a similar feeling of oversized emotion and visual awe but was clearly a more difficult and sophisticated shot to create. These scenes provide a rare birds-eye-view of war in a way that I don't think has ever been matched. But for God's sake you have to see this in the original wide-screen format. It is the only way to experience the full impact of this unforgettable movie.

Famous French actress Arletty has the small but apropos role of a middle-aged farm woman who notifies some French priests after she encounters an allied paratrooper. Arletty, who was 64 years old at the time, had spent the years during the Nazi occupation in Paris making the classic French underground film Children of Paradise. 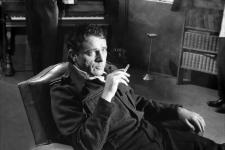 Richard Burton manages to stand out in a cast of what seems likes thousands.

While I completely agree with both of you about so much about this movie, I also have to confess that I was a little bored by it. I don't want to in anyway make that a reflection upon the effort, bravery and accomplishment of all those who were involved in the mammoth undertaking that took place on a single day. It's just that this is a very long movie and this is one massive fucking invasion and so really this is a whole bunch of little movies inside one bigger movie. Some characters and events I really liked and was interested in and some others, not so much. Maybe as a mini-series I would have enjoyed it more, but watching it all at once, I was checking the clock pretty frequently after the two hour mark.

Technically though, this is a great, great movie. The scenes you guys mention, particularly the aerial shots of the troops running through the town, are amazing. Red Buttons dangling from the clock tower (a true story by the way) is a very tense and emotional one. Wayne is great as always in a war movie. I also liked Richard Burton's last RAF pilot in the squadron. Burton is a great actor and he manages to convey a great deal of emotion in his few scenes. There are many classic individual scenes (the clicking that turns out to be a rifle being cocked, the German and American soldiers passing within a foot of each other; just to name two), but together they add up to too much.

Something I found interesting about this movie is how the Germans aren't shown as monsters, but as fellow soldiers doing their duty. Hitler is bad-mouthed by one of his generals, "I won't bow to that Bohemian Corporal." No one is running around saying “Heil Hitler” in the movie. Was there a wish by Hollywood not to offend Germany?

Also, unlike later Hollywood movies, the invasion is shown to truly be an Allied effort. The British and the French are involved just as much as the American forces.

There's no doubt that this is an important film that commemorates a very important day. Possibly the single most important day of the 20th Century. The importance of what the people involved in that day did can never be over-estimated. Maybe you can blame my 21st Century short-attention span, but I just can't deny that like the men in the movie, I was more than a little relieved when The Longest Day was over.