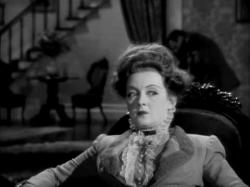 As Eric noted in his review for The Strawberry Blonde Hollywood, in the early forties, was waxing nostalgic for turn-of-the-century simplicity. Unlike The Strawberry Blonde or Meet Me In St. Louis, however, The Little Foxes is a blistering statement of human cruelty and avarice that just happens to be set in the same time period.

Adapted from the Lillian Hellman play, The Little Foxes tells the story of the truly dysfunctional Giddens family. They are poor white trash that through shady business dealings managed to acquire a level of wealth in a small town in the south in 1900. The main characters consist of the three Giddens siblings, the spouses of two of the siblings and two young adult children, one by each couple. The three siblings are all completely free of scruples. The worst of the three is the beautiful yet merciless Regina (Bette Davis).

When her dying husband refuses to give her money for a surefire business deal with her brothers, her nephew - in cahoots with her brothers - steals seventy-five thousand dollars worth of bonds from her husband so that the deal can be put through. When Regina finds out what they've done she blackmails them into giving her two thirds of the profits. But not before causing the death of her husband (in order to get her hands on his money) by refusing to give him medicine when he suffers a heart attack. The scene where her husband is crying out for help as he crawls pitifully across the floor and up the stairs in a vain attempt to get his medicine, all the while Regina is watching him with a look of sheer evil on her face, is one of the most powerful moments in this or any movie. Of the many great performances given in her career by Bette Davis, Regina Giddens is the most visceral.

Her brothers and her snivelling nephew are nearly as wicked in their mendacity but not quite.

These 'little foxes' are balanced by Regina's noble husband, their virtuous daughter and the abused wife of the younger of the two brothers. They represent the 'tender vines of the grapes'.

The characters are all well developed and vividly portrayed (for example it is subtly hinted that the older brother is gay) but it is the amazingly brutal performance of Bette Davis that carries the entire show. Regina views life as a contest. She is constantly trying to manipulate those around her and naturally assumes that everyone else thinks the same way; only most people are just too stupid to be successful at it. She gets to deliver what is quite possibly the cruelest line of dialogue ever spoken in any movie. After her invalid husband has refused her request for the money she tells him in a voice laced with arsenic, 'I hope you die. I hope you die soon. I'll be waiting for you to die.' She then proceeds to live up to her words.

William Wyler directs with a fine eye, remaining true to the structure of the play while evolving it for the screen at the same time. The Little Foxes is the perfect antidote for anyone suffering from the misguided belief that old movies lack any real bite. These little foxes have sharp teeth and they are not afraid to use them.