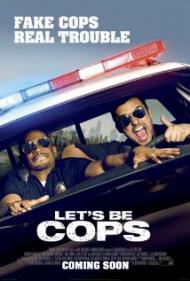 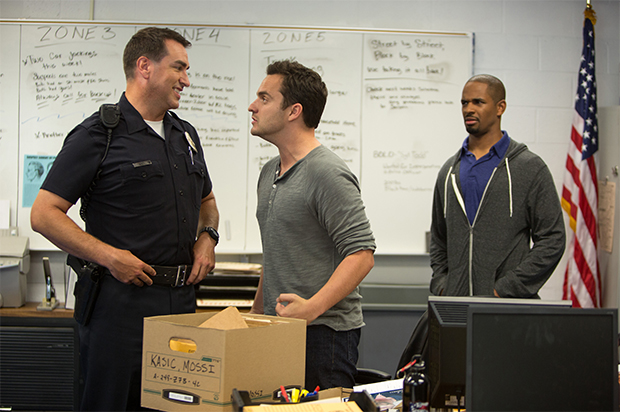 "New Girl" co-stars Jake Johnson and Damon Wayans Jr. co-star as two 30 something roommates who pretend to be police officers and end up in all kinds of trouble with some gangsters. Yeah, the plot sounds like it belongs on a sitcom and like so many television situation comedies, the likability of its stars will make or break it for most people.

Justin is a video game designer who comes home one day depressed after having his latest idea for a game about police viciously shot down during a presentation. His lay about roommate, Ryan, reminds him that they have a costume party to attend that night. After Justin shoots down Ryan’s Charlie Brown costumes, they go as policemen, using costumes Justin had for his game presentation.

Before you can say Bridget Jones’s Diary (2001) or Angus, Thongs and Perfect Snogging (2009), the boys get laughed out of the party for being inappropriately dressed. After walking humiliated from the party, they discover that people on the street give them respect like neither has ever experienced before. They decide to exploit it for all it is worth. While in uniform, they get the chance to get back at some foreign guys who had previously embarrassed them outside a club when they were dressed as their average Joe selves. The foreign guys turn out to be members of the Russian mob and before you know it, these two middle aged morons are in way over their heads.

At one time, Hollywood made movies about high school or college aged young men who did stupid things and we all laughed as we recognized their stupidity to be a side effect of their youthful exuberance. For the past decade or so we have been given a gluttony of movies that feature men of an age that should know better but still act as if they have to party the night before going to work the next morning.

Johnson (36) and Wayans (31) play their roles with all the energy and enthusiasm required. In fact, they are the best things about the film. Wayans looks absolutely pitiful being demoralized at work. His idea for a police video game gets changed by his boss to a “Zombies versus Firemen” game. His boss tells his staff to get involved in it. Later he calls a meeting to discuss it, telling a sad Wayans to just bring a pen to take notes. My favorite moments of Johnsons are when he plays football in the park with a bunch of boys. He plows through them like a bull stampeding over penguins. He takes the games seriously while one boy describes him to his father as just some guy who shows up and pretends to be their coach.

Neither actor is helped by the script. Wayans gets such gems as, “I look like somebody hit me in the face with Lil Wayne.” after having fake tattoos put on him so as to go undercover, and “I feel like Danny Glover before he got too old for this shit.” making a reference to the Lethal Weapon films. Johnson is given such juvenile lines as, “We're the law, bitch!” and “That's what you GET!” The funniest moment in the entire film is provided by a junkie chick who poses in interesting positions.

If you can excuse these two hapless wannabes deciding to seriously investigate the mob instead of just making some anonymous phone calls to the authorities, and risking imprisonment for impersonating a police officer, you may enjoy this film. Do you remember when you pretended to be a cop? Yeah, you were probably about eight years old. Your level of maturity and ability to suspend your disbelief will greatly decide how much you enjoy Let’s Be Cops. 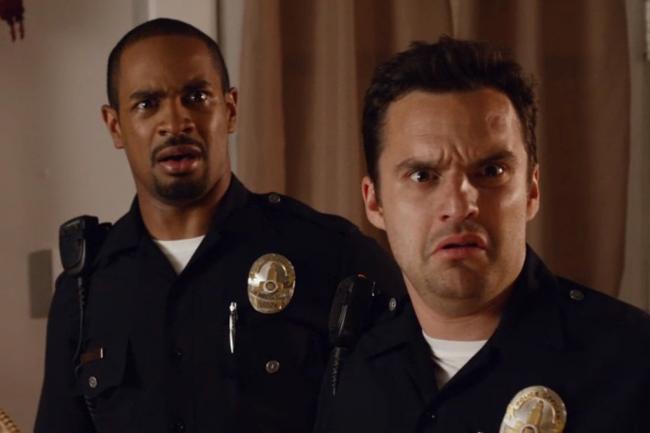 Damon Wayans Jr. and Jake Johnson in Let's Be Cops.

Let's Be Cops is a buddy comedy painted strictly by the numbers. There's nary an original thought in sight. It succeeds solely on the strength of the considerable comic chemistry between Damon Wayans Jr. and Jake Johnson. They alone make it worth sitting through – albeit just barely. Although judging by how much money it made (a sequel is in the works) it is also critic proof. Apparently Eric and I are just too damn discerning to enjoy the low brow humor on display here.

It really is a one joke premise. Two losers put on police uniforms and get respect. With the respect they gain confidence. They decide to keep the charade going and hilarity ensues. Well that was the plan anyway. Mildly amusing, sporadically funny antics is a more accurate description. The only time I truly guffawed was when they get mistaken for strippers by some homely women at a party and one of the women bellows out, "I'm getting fucked tonight!"

Damon Wayans Jr. is keeping his family tradition alive. As you might expect, he's an adept comic actor who can switch instantly between meek and ferocious. He generates the most laughs and also gets the love interest (the beautiful Nina Dobrev). Jake Johnson plays the more annoying character. He's the one that instigates all of their problems by constantly pushing things to see how far they can go. He drives like a maniac and acts like a dick.

The fact that actual police officers accept these two idiots as real cops is something that only happens in silly buddy comedies. But then nothing about this movie is meant to be taken seriously. The normal laws of physics don't apply. The “plot” is just an excuse to have these two talented comic actors play off each other and act stupid for the camera. Damon Wayans Jr. and Jake Johnson deserve a better script. Let's hope the sequel gives them one. But I doubt it. 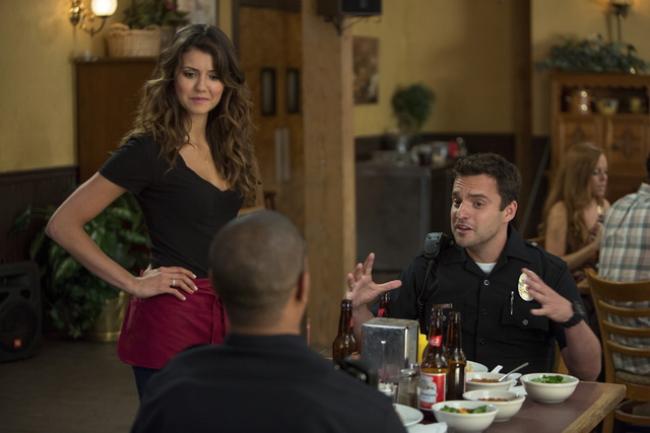 Wayans and Johnson do make a good comedy pairing. They have a natural camaraderie (or a well acted one) that brings some warmth to these cartoon characters. They manage to raise a couple of scenes to the watchable level and even provide a few...a very few...genuine laughs. Reportedly the two of them improvised much of their dialogue, which I guess makes them better performers than writers since that dialogue isn't particularly anything to write home about.

The plot itself is, of course, completely ludicrous. Johnson's behavior borders on insanity. The situation with the mobsters and the other police officers is so unrealistic as to be from a cartoon. As my brothers said, it's a one joke premise stretched to feature length. There's enough material here for a Saturday Night Live sketch and that's about it. The fact that an entire movie was made out of it is criminal and the fact that they made not just a movie, but an hour and 45 minute long movie, raises that crime to the level of felony. And the fact that they're making a sequel means the crime is surely a capital offense.

Despite the lowbrow humor and silly shenanigans (the silliest of which were given away over and over again in the seemingly endless parade of previews for this movie), there are actually a moment or two where the script tries to present these two sad sacks as genuine people. At the reunion party when Johnson mourns the loss of his football career and after the presentation when Wayans' idea is shot down, these two are almost three-dimensional human beings. When they receive the respect they so crave after donning the police uniforms, you can almost excuse the charade and understand why they might wear the uniforms for the rest of the night. By the next morning though, when Johnson is buying a used police car, you'll begin to suspect that insanity I mentioned earlier.

If the script came with a little backbone it might have explored that insanity a little and gone a darker path. With the attitude of many towards police officers these days, there are some things worth exploring in a more dramatic interpretation of this story. However, dark and twisted humor that provokes genuine thought is definitely not what this script is all about. It's only interested in cheap jokes and easy laughs. It'd be nice if a little more thought were put into the sequel, but somehow I don't see that happening.