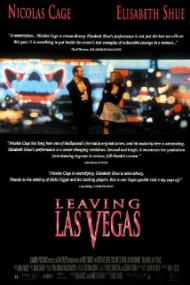 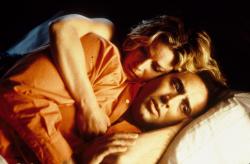 If Hollywood love stories have taught us anything, it's that there's someone for everyone, even the two lost souls featured in Leaving Las Vegas. This romantic tragedy is a dark story about two people who find each other on the road to oblivion. It's not a happy tale by any means, but it is a moving one that is beautifully acted by its two leads. It generated a large amount of buzz when it was released, along with several award nominations and wins. Almost 20 years later and it still holds up remarkably well.

Nicolas Cage stars as Ben Sanderson, an alcoholic screenwriter who loses his job at the beginning of the film. His background is never fully explained. We know that at some point he had a wife and child, but whether he started drinking because he lost them or he lost them when he started drinking, isn't really important. He's an unhappy drunk, who decides to burn or throwaway his possessions and take his severance check to Las Vegas and literally drink himself to death.

Once in Vegas he runs into Sera, a prostitute played by Elisabeth Shue. Sera is as lost as Ben is. She's in a relationship with an abusive pimp. Her sense of worth is so warped that when her pimp cuts her as punishment and then feels remorse, she feels bad for him.

These two damaged, train wrecks are able to find some kind of solace in each other, although perhaps not equally. For Ben, Sera is someone to have fun with and to help take care of him, although never have sex with, since the only thing he truly desires is in a bottle. He makes Sera promise that she will never ask him to stop drinking. At first Sera seems attracted to Ben like someone picking up a stray puppy. Clearly she only feels she has worth when she's giving something, most often her body. She continually attempts to get Ben to have sex with her, partly because she hopes to make a deeper connection with him, but also because you can see that this is how she's used to doing things. But perhaps the fact that Ben doesn't want to have sex with her, but still wants to be with her, is what she finds so attractive about him in the first place. The tone of the film is set from the beginning however, and you know that these two aren't going to live happily ever after together.

Although nowadays Cage is known for appearing in whatever b-movie will provide him with a paycheck, he was taken seriously as an actor once upon time. He won the Academy Award and a slew of other awards for this part. Given the subject matter and the tone of the film, his win seems almost an anomaly. Not because he isn't' good, but because this movie isn't typical Oscar fare. It feels more like an independent film, more likely to win a Spirit Award than an Oscar. Reportedly he prepared for the role by binge drinking and having friends film him while drunk so he could mimic his behavior. It's an effective technique and one that is far from the stereotypical drunk that is usually shown onscreen.

As good as Cage is though, it is Shue who is the revelation. We learn even less about Sera's background than we do about Ben's, but because of Shue's heartfelt performance we know all that we need to know about her. She displays a range of emotion as she is put through the wringer. If there's any hope in this dark film, it comes from her. There are scenes scattered throughout its length where she seems to be telling this story in the past tense, to possibly a psychiatrist. In terms of acclaim, this was the height of Shue's career, earning an Oscar nomination, but not a win. She continues to work, but has yet to top this film.

Helping to set the tone of the film is a moody, jazzy soundtrack composed by the film's director, Mike Figgis. It adds greatly to the atmosphere, as do the standards sung by Sting and Don Henley.

This isn't a traditional love story. Instead of romance you have two of life's losers clinging to each other as they head down the drain. It's a gloomy film, but a riveting one.

This is Nicolas Cage's finest onscreen hour. He makes you identify with this sad, sad man. And he does it without any over-sized emoting. He also gives the man a certain degree of elegance, shabby though it may be. Elizabeth Shue likewise gives her greatest performance. It's a sadly riveting watch as these two lost souls attempt to find solace in each other yet neither of them can break the chains of their self-destructive behavior. It is truly heartbreaking.

It takes a very dark soul to write so honestly about such things. John O'Brien, the author of the novel on which this movie is based, was one such person. He committed suicide just two weeks after learning that his first novel was being made into a movie. His father later said that the book was his son's suicide note. It's an elaborate one that's for sure.

As Scott wrote, it feels more like an independent film than a Hollywood movie. This is because the budget was quite small. It was shot in 16mm film rather than the more expensive 35mm. Mike Figgis also shot street scenes in Las Vegas without a permit. This adds to the film's veracity. Sometimes from necessity comes great art.

There are quite a few famous people in tiny roles. Among them are Laurie Metcalf as Sera's landlady, Julian Lennon as the bartender that wipes blood from Ben's face, Mariska Hargitay plays the prostitute that Ben brings to Sera's apartment, R. Lee Ermey plays the man that Sera propositions at a casino bar, and singer Lou Rawls plays the sympathetic cabby that picks up Sera near the end of the movie.

Leaving Las Vegas takes a bleak look at life. Ben Sanderson is a man that no longer wants to live. The one thing he has left is in deciding how he wants to leave the planet. He goes out on his own terms, as pathetic as they are. He leaves behind a wounded soul named Sera. A woman he touched so deeply. The optimist in me would like to think that in dying he somehow saves Sera but perhaps that is just wishful thinking. 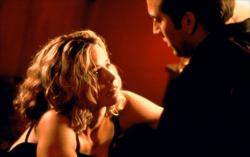 I never bought that this couple met and quickly fell in love. I think there is something greater at play here. Sera is quite simply an angel. The spelling of Sera with an “e” is the first giveaway, as in seraphim, the angels that circle the throne of God in the Bible and in the Torah. Sera is a sex worker, which to many men is an angelic occupation providing them with pleasure and satisfaction. The Bible speaks of angels comforting men.

Ben is on a highway to hell. The alcohol is the form of transportation he allows to take him there. Sera never judges Ben’s drinking. Shortly after meeting him she invites him to move in with her. She even buys him a flask as if to encourage his drinking. After moving in with Sera, Ben tells her that he loves her but adds, “I am not here to force my twisted soul into your life.”

Sera does not try to save Ben but she does protect him. Talking the guards at the casino into letting him walk out and not throw him into the street. Later that night, Ben asks her, “What are you, some sort of Angel visiting me?” She turns away from him and says, “You don’t know what you are saying. I am just using you.”

Perhaps she is. Sera may very well be a fallen angel. Look at the scene where her pimp sends her out of the hotel room, stating she will never see him again. Could that not be symbolic of God banishing an angel from his kingdom? Angels dwell in heaven while hookers practice their trade in rented rooms.

Sera gives Ben everything he wants, including his fantasy of drinking liquor off her body. Finally she asks Ben if he will see a doctor. When he reacts by stating he will move back into his hotel, she gets upset and says, among other things, “I‘ve given you tons of free will here.”

The Bible speaks of Angels being the go between God and man. They deliver information, comfort, smite, protect and deliver the spirits of the recently deceased into God’s kingdom. Sera’s final moment with Ben defends that theory.  At least, this is how I chose to see this film. Viewing it any other way does not make sense to me.