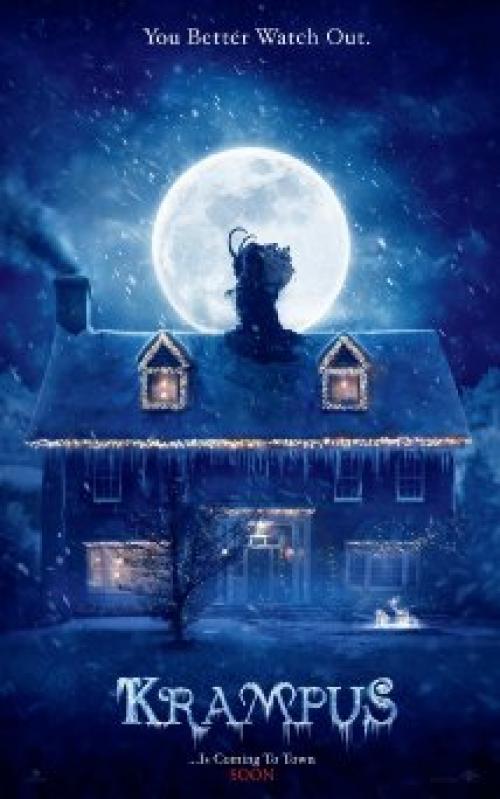 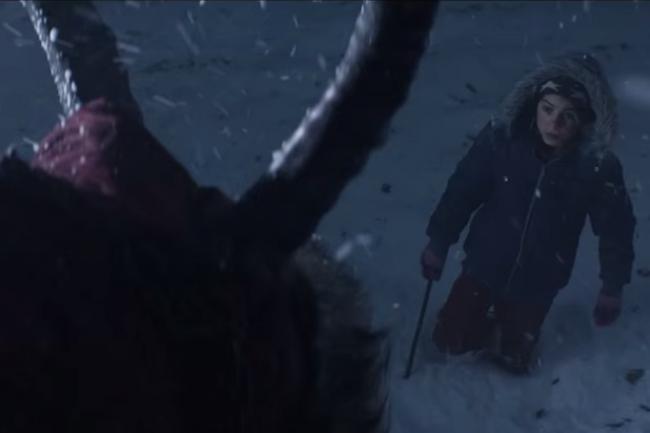 Krampus isn't as well known in America as he is in Europe. In Germany, he is a popular Christmas figure, often referred to as the shadow of Santa Claus. According to legend, the horned figure accompanies the jolly old elf on Christmas Eve, but where Santa rewards good little boys and girls, Krampus punishes the naughty. With this new horror comedy, writer/director Michael Dougherty introduces the character to mainstream American audiences with some success. It's a fun little movie, but one that feels restrained. It never quite goes far enough over the top.

The opening credits, accompanied by Bing Crosby singing "It's Beginning to Look a Lot Like Christmas", set the mood of the story. We are shown scenes of the madness that the holidays can bring that demonstrate how what should be the happiest time of year can often be the most stressful. The story then focuses on one story that proves how true that can be. Adam Scott and Toni Collette play Tom and Sarah, middle class parents living in the suburbs with a son, a daughter, and Tom's aging German mother. They are joined for the holidays by Sarah's sister and her family, including her husband Howard, her two very butch daughters, their obese son, a baby, their bulldog and their Aunt Dorothy. There's an immediate culture clash between the two families and following an argument between the children over dinner, Max, Tom and Sarah's son, tears up his letter to Santa and sends it scattering on the wind.

Max's loss of belief in Christmas and all the other stress of the holidays acts to summon Krampus. A blizzard blows into town, knocking out the power and leaving the two families stranded in their house. Soon all kinds of odd things start to happen, leading up to attacks by ginger bread cookies, teddy bears, a carnivorous jack in the box and finally Krampus himself, as one by one the family members are picked off. It is Omi, Tom's mother, who eventually reveals to the family what is happening. It seems this isn't the first time she's encountered Krampus. He visited her as a child, killing her entire family, and leaving just her alive. But who will be alive by the end this time?

Christmas comedy horror films are a pretty rare genre. The only other major one I can think of is Gremlins. In that earlier classic, the Gremlins terrorized an entire town, but here the action is confined to one neighborhood and one family. Perhaps it was done to keep the budget down, but it limits the film. With more victims to play with, Krampus and his minions could have been shown to be more deadly. As it is, you're never sure if some of the characters are really dead, or if they'll return, and several characters have narrow escapes rather being killed outright. With such a small cast, the filmmakers have to be stingy with who they eliminate and how fast.

Because of the marketing of the film, I wasn't sure what to expect from this movie. The previews have definitely been playing up the horror angle instead of the humor. It makes me wonder how well its box office will hold up in the coming weeks, following a strong opening weekend. There's plenty of atmosphere and a few scary moments, but, as I said, the body count is quite low and the PG-13 rating keeps the blood and gore to a bare minimum. Not that I'm a big fan of gory movies, but with such a silly premise as this movie, I do wish it had gone more over the top in terms of scares and gore. It needed to push the boundaries further than it does. At times it feels as though it's playing things too safely.

The film ends slightly ambiguously. It's up to the audience to interpret exactly what it means, but I felt as though again it didn't quite go far enough, in both explanation and outrageousness.

I don't want to sound too harsh about this movie, because it is enjoyable. I just hope that if, like most horror movies, it generates a sequel, that the filmmakers push the boat out a little further and really play up the outrageousness of the situation. 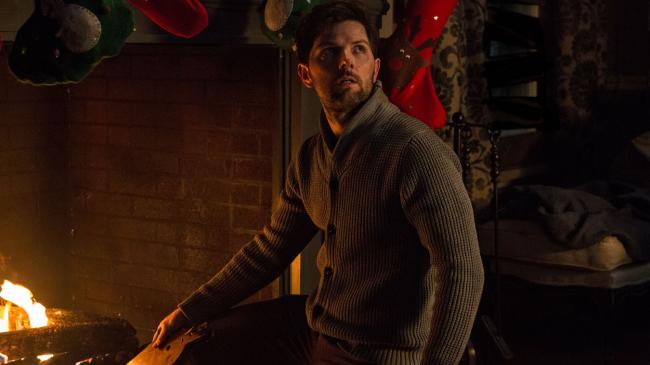 The opening scenes, accompanied by Bing Crosby singing "It's Beginning to Look a Lot Like Christmas" with shoppers fighting and stampeding sales clerks does set the mood of the story but what I took away from it was that we can all be some form of a monster at times. We then see the anxious shoppers in line handing over hundreds of dollars for junk that will likely not be as appreciated as the buyer hopes, and looking miserable in the process. The store clerks look even more depressed as they have to serve all of these impatient, ungrateful customers.

We then meet two related families that by no means want to spend time with each other. They treat each other horribly, complaining about any little thing they can. No one appreciates what another has or is doing for them. No one on screen has that magical Christmas spirit, prompting Krampus to pay them all a visit and remind them that it was not a good idea to be so Grinchy this time of year.

The early part of the film is played for laughs in the vein of Christmas Vacation (1989). Then suddenly a teenage girl goes for a walk and gets stalked by a large horned looking demon and the tone of the film changes dramatically. Before you know it, we are watching a Night of the Living Dead inspired film as the families board their house up to keep out the prowling demons. The change from comedy to horror is slightly jarring, especially when you consider that this is a Christmas movie.

My son and I found ourselves caught up in the proceedings but so much is never explained. We are shown an ever growing population of snowmen in the yard outside their house. Do they represent Krampuses victims or are they just there to look menacing? The ending is likewise left open for interpretation. Is the family trapped in the snow globe? Was it all a dream? Are the globes just for Krampus to observe potential victims through? The most important question was where in the hell was Santa Claus? This demon is terrorizing and killing innocent people while Saint Nicholas is nowhere to be seen.

I enjoyed much of the goings on. The pace is perfect and the jokes to horror ratio is right on. However, I hate unclear endings. No, it is never an artistic decision to do that. The writer, Michael Dougherty, simply screwed up. He got paid to write and direct this film. It was his job to determine the outcome, not the viewers.