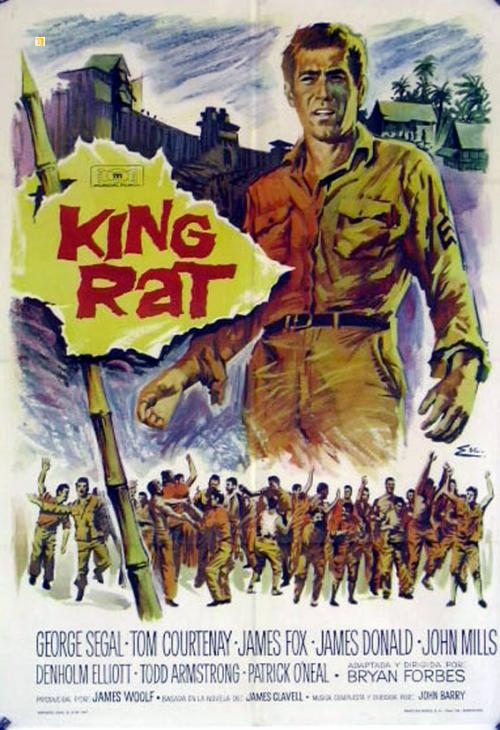 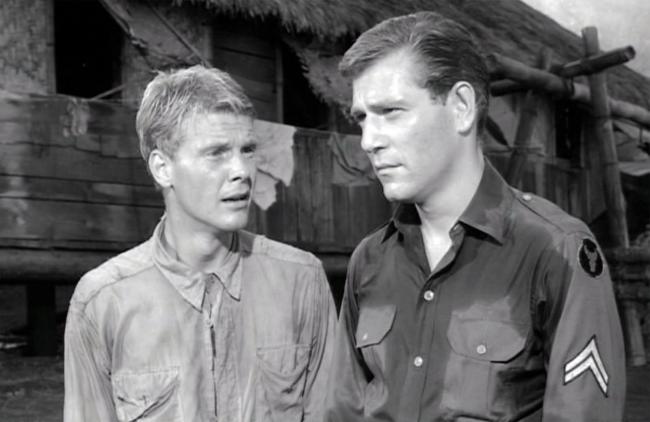 Based on James Clavell's first novel, King Rat tells a fictionalized version of his years in a World War II Japanese prisoner of war camp. It's a dark and cynical look at what humanity will do to survive under extreme circumstances. Although it received general critical praise and 2 Oscar nominations--for black & white cinematography and black & white art direction--it flopped at the box office and remains an obscure and mostly forgotten film. Audiences then and now seem to prefer the more heroic The Great Escape and Bridge on the River Kwai to the morally ambiguous story that is told here. It's true that those movies might be more entertaining than this one, but the complex story and character studies presented here will give you more to talk about afterwards. It deserves better than to be forgotten.

A very young, and surprisingly handsome, George Segal plays the title character. He's an American Corporal named King, but it's also his title, as that's how his fellow prisoners refer to him. He's a black marketeer who has fingers in every pie and wheels and deals with his fellow prisoners and the Japanese guards. While every other prisoner is reduced to rags, he remains in a clean and laundered uniform. His fellow bunkmates work for him and even the higher up Officer class are on his payroll. Although we've seen this type of character in other POW films, none were ever portrayed quite so mercenarily. James Garner's Scrounger in The Great Escape, for instance, is as clean-cut, all-American as you can get. The closest any previous character ever came to the King was William Holden's Sefton in Stalag 17, but even he redeems himself at the film's climax by doing the heroic thing. Not so, the King.

There's less of a plot and more of a series of events that take place over the final months of the war. These events revolve around the burgeoning friendship between the King and Marlowe, an upper class British Officer. The King is attracted to Marlowe because Marlowe can speak Mali, the language of the native guards. He grows to respect him because Marlowe has no respect for money, something that is totally alien to the King. How much of the friendship is genuine and how much is mercenary, is left up to the viewer to decide. The King saves Marlowe's life at one point, but a great deal of money is depending on his survival and the question of how much effort the King would have made if this were not the case is left open.

In contrast to the "honest" wheeling and dealing of the King, the film shows how some of the aristocratic British officers use their positions of authority to steal extra rations for themselves. The lower class Lt. Grey, who is in charge of policing the camp, is at odds with both the King and the upper class officers. He is outwitted by the King and outranked by his fellow officers, both militarily and socially. In short, everyone does what they need to do to survive, the King just does his surviving out in the open and ostentatiously. The world inside the camp is dog-eat-dog (symbolically and literally at one point).

Both Paul Newman and Steve McQueen reportedly turned down the leading role before it was given to George Segal. It's easy to see why a leading man might be leery of such a part. How you view the King will reveal a lot about yourself. Is he a hero for surviving so well? Some of his actions are cold and callous, but isn't he just doing what everyone else is trying to do, but doing it better than them? Or, is he a selfish, ruthless, black marketeer, fraternizing with the enemy, and taking advantage of others? Is he capitalism at its very best or at its very worst? It's a part better suited to a character actor and Segal does a nice job. I'd only ever seen him in comic parts, but he does good work, as does the entire male (no women appear anywhere in the film) cast.

As with most page to screen adaptations, the movie doesn't quite equal the book, but it does come close. By necessity, the story has been edited down and several subplots removed. Most notably absent are the homosexual characters, which probably wouldn't have been allowed in 1965 anyway, and the visit the King and Marlowe make to a nearby native village. These omissions don't hurt the film, but anyone looking for more background and character detail would do well to seek out the original novel.

King Rat isn't a movie for everyone. Its grim subject matter sees to that. But for those willing to take a look at humanity's darker side, the film offers its own rewards and plenty of food for thought. 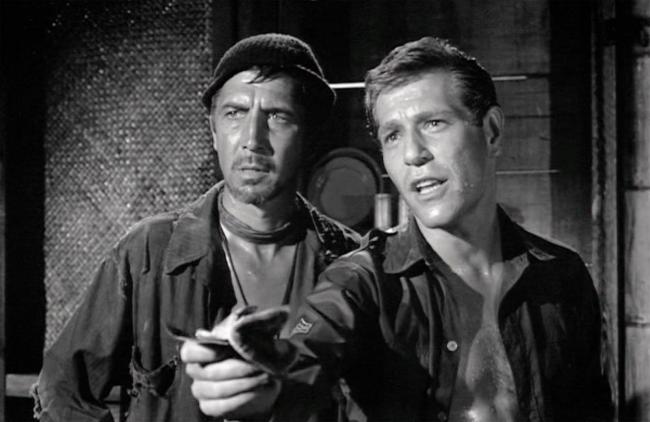 I've never read the novel on which this movie is based but I agree with Scott that King Rat is a thought provoking character study of men surviving in a prisoner of war camp. To me it wasn't so much that the King did what he had to do to survive but rather the way he lorded his power over those around him that makes him such an unlikable guy. This is symbolized by his clean uniform, which is all about making himself superior to those around him and has nothing to do with survival. He is definitely closer to the bad side of capitalism. The side that demands a profit at any cost, regardless of who else gets stepped on or hurt in the process.

Given that the man is scum, his relationship with Marlowe is quite interesting. I believe it to have been the one genuine friendship the King has with anyone in the movie. At first he cannot figure this guy out, especially after Marlowe refuses a cash payment. I think he shows real concern for Marlowe's arm. The reason he reacts the way he does towards Marlowe when the war ends is because he has true feelings for Marlowe but he thinks that Marlowe (as an upper class British officer) will now reject him. Their relationship is the heart of the story.

Scott mentioned The Bridge on the River Kwai and The Great Escape. Not only do those movies share plot similarities with King Rat, they also share an actor. James Donald, who plays Doctor Kennedy here, played important roles in both of those films too. He's the one that utters the famous final words from Bridge, “Madness! Madness!” In Great Escape he played the senior British officer. Apparently he spent a big chunk of his career playing a WWII POW.

As for George Segal, having seen him in both Ship of Fools and Who's Afraid of Virginia Woolf? I was surprised by neither his dramatic chops nor his youthful handsomeness. He's quite good here. As mercenary as the character is, Segal makes the King too charming to hate completely.

I see why this movie wasn't a big hit though. It's slowly paced and doesn't have much to offer in the way of action. Black and white movies were on there way out by 1965 and it would have helped if this one had been shot in color like both Bridge and Escape were. Still there is plenty to like about King Rat. It's a fairly riveting portrait of humanity surviving under inhuman conditions. 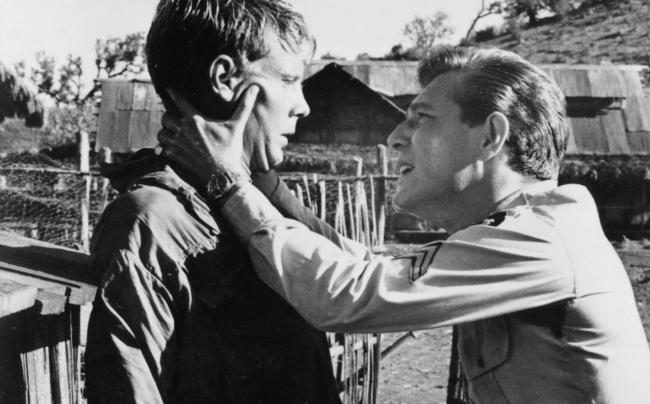 I prefer the novel to the film but the movie has much to offer. In the book, we enjoy his cleverness and manipulation of others to get what he wants. He is pretty much able to come and go from the prison as much as he likes and even gets laid in a local village. Although King is literally a prisoner, I doubt he has ever known such freedom. We read in the book about his clothes being tailored but to see it in on screen really shows a comparison to the others and makes his temporary social status more glaringly obvious. The sub plot from the book involving homosexuality demonstrates yet another way what some men will do to survive and how some men can thrive in a particular environment.

The symbolism that King is only a corporal, yet rules over men of higher rank is thought provoking. Some of these officers cling to their ranks as a status symbols while others find status by having an important job in the camp, such as watching the food, taking care of chickens, acting as law enforcers or being a lackey for the King. The only real man of value is the doctor, but even he gets bypassed by King at one point. Either way, all of these filthy sweaty men are mere rats scurrying around doing whatever they can to survive. None do anything productive but live to the next day. Even though King appears to be living like a king it is only in comparison to his rat subjects.

As Patrick noted, the relationship between King and Marlowe is the heart of the story. They get each other right from the start. King invites Marlowe into his bungalow and teases him with food. King then asks Marlowe to say something in Malay, which he does and then translates the meaning, "When do I have to kiss thee on the ass?" King smiles and responds, "After the egg. Never before meals." It is to Marlowe that King confesses his background and partial motivation. "You know, before this, (war) everybody had it made but me." I believe they developed a sincere friendship and disagree with Patrick about the way in which King reacts towards Marlowe at the war ends. It has nothing to do with King thinking Marlowe will now reject him.

I was reminded of The Lord of the Flies when the allied soldier entered the camp. Like the boys on the uninhabited island, the presence alone of someone from outside their limited world brings a slap of reality to them. King has survived so well during his interment that he is not at all shocked, while the other prisoners are literally scared silent trying to process what is happening. This, and a few questions, leads the soldier to deduce that King has been a collaborator and implies that King will be dealt with accordingly.

Although all of these men did whatever they could to survive, as Scott wrote, it is King alone who will likely get prosecuted for his more successful efforts. However, we see at the end that he truly had a sense of honor. He could likely get out of any trouble by pointing out how his efforts, however self serving, did, in fact, help sustain the lives of many other prisoners. In fact, Marlowe would have been more than happy to testify on his behalf that if not for King he would have lost his arm and possibly died. We never hear what happens to King but we get the idea, from his avoidance of Marlowe, that he will take the collaboration rap for him and any others. Unlike Patrick, I would never consider King "scum". The moment he is taken away without ever asking Marlowe or anyone else for help shows a depth of quality in his character. He alone masterminded his kingdom and he alone is willing to take any punishment for it.

King Rat is not the most exciting or entertaining prisoner of war film. It runs too long and methodically slow. The point could have been made in less time. It does however, work very well as a character study and may cause some discussion afterwards. Just look at how Patrick had one opinion on King, while I had another. As Scott wrote, what you think of King may very well be based more on you and your morals than just what is presented on screen. 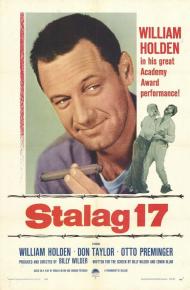