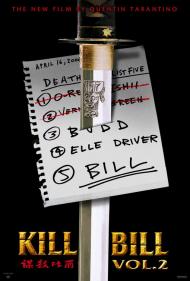 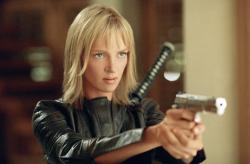 If Quentin Tarantino made any mistake with Kill Bill, it has to be not releasing the DVD for volume 1 sooner. With only three days between its release and the theatrical release of volume 2, I can't be the only person who saw the sequel before seeing the original. You might be wondering if I was lost, coming into the story halfway, or if I was able to enjoy the movie having to pick the plot up as it went along. Well I can tell you with the utmost sincerity that not only did I enjoy it, but also Kill Bill Volume 2 was an excellent reminder to me to just why I love movies so much. It is a visual treat that is as gloriously cinematic as it is completely over the top in the best possible way.

The general plot is simple and therefore not hard to pick up whether you've seen the original or not. Uma Thurman plays Beatrix Kiddo, a deadly assassin who tried to quit the biz when she became pregnant. Her ex-boss and ex-lover Bill (Carradine) didn't appreciate her efforts to start a new life and tried to kill her, but only succeeded in putting her in a coma for several years. Upon awakening Beatrix, or the Bride as she is known for it was during her wedding rehearsal that Bill tried to kill her, began to seek revenge upon Bill and the other assassins in his employ. As Volume 2 begins, there is only Bill, his brother Budd, and Elle (Hannah) left alive.

While the action is pretty much non-stop and highly stylized, it is the utter humanity and intensity that Uma Thurman brings to her character that keeps this movie from sliding over the edge. After all the pain and effort she is put through in this movie, you can't help but feel for her. True, in effect, she's super-human in her abilities, but her motives and emotions are very human. Even when she's performing the impossible, you are able to accept it because Uma makes you accept it.

Beyond the action, beyond the acting, beyond the great lines of dialogue, and beyond the driving soundtrack that acts as an exclamation point to the action, there is the humor. Too often in action movies the humor pulls you out of the moment. It usually comes in the form of a dry witticism following a battle or a killing. In Kill Bill, the humor is essential to the story and blended seamlessly into the action. The character of Pai Mei, as an example, is both humorous and a sly tribute to the Kung Fu masters featured in so many martial arts films.

One common comment about Volume 1 that I heard more than any other was its excessive blood. I can't compare the two, but I have to say, based upon all the talk I was expecting a great deal more blood than there was. Apart from one eye-popping battle scene between the Bride and Elle, the blood is no more excessive than in any other action movie.

If there were any weakness to the movie, I'd have to say it comes at the film's climax. Perhaps the emotional impact of the ending would have been greater had I seen the first volume, but as it was I felt it was slightly anti-climatic. Not bad in the least, but somehow I expected more than that.

My initial reaction after seeing Volume 2 was to immediately think, "I have to see volume 1 now!" Maybe releasing them so close together wasn't a mistake after all. 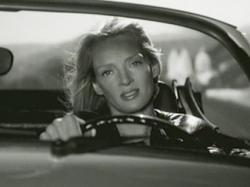 The reason Scott was not lost watching this film is because Tarantino shows the wedding massacre scene, again. Okay, this time we have dialogue and some history to their relationship, but it is a bit of rehash for us folks who saw Volume 1. Scott also calls Volume 2 "action packed." Other than the chick fight in the trailer, which ends on a wicked note, there is really not much of a fight to be found in this movie.

In most movie sequels, the characters and their relationships have already been established, in the first film, so the second can jump right into the action. Tarantino does things his way. That's admirable, but does not necessarily work here. Volume 1 had more action, while volume 2 has more flashbacks. Occasionally a scene seems to serve no purpose. Why is it important that we find out Budd has a jerk boss? Why does Beatrix have to be shown talking to a pimp? I could accept that Budd has a jerk boss just by him saying it. It would be very believable, in this film, to have Beatrix walk up to Bill's front door without getting directions.

My absolute favorite scene in this movie is when Bill explains the Superman mystique. It is some brilliant insight.

Tarantino set the bar high for himself with Volume 1. There was more action, and for that matter more style. This one has to resolve everything, so he is limited in what he can do with the characters. Still a little less talking and a little more fighting would not have hurt. 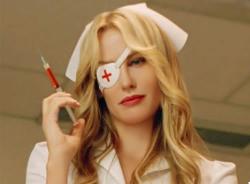 Yes Vol. 2 has less fighting, action, violence and gore than Vol. 1 but it is still a superior movie. Vol. 1 is, as Eric said, more stylish. It is also more cartoonish, faster-paced and more over-the-top. Vol. 2 is, by comparison, much more character driven. As for Scott's comment about the anti-climatic ending, I have to disagree with that too. You knew, from an earlier scene, how Bill was going to die. Tarantino is great at setting up scenes and, as he so brilliantly did in Pulp Fiction, at telling his stories in a mixed up - but highly effective - chronological order. My only problem with this movie is the slow opening. I agree with Eric that the wedding massacre rehash should have been shorter and that the scene of Budd at the bar was completely unnecessary, but from the moment Beatrix gets buried alive the movie never falters until the end credits.

The most purely entertaining scenes for me were Beatrix's martial arts training. Gordon Liu is hilarious as Pai Mei. The way he constantly strokes his beard and gruffly barks out orders. Also Tarantino's camera work pays sly homage to the genre with intentionally funny zooming close-ups. The other best scene is the fight in the trailer between the two female assassins. Daryl Hannah is perfect and has created a classic movie character with the one-eyed patch wearing Elle Driver.

As great as Uma Thurman is as Beatrix though, this volume really belongs to Bill. David Carradine is superb in the role. He has a unique voice and knows how to deliver a line. And Tarantino gives him plenty of great dialogue to speak. Tarantino is great at bringing back stars from another era that have fallen out of favor, most famously John Travolta. It will be interesting to see what this movie does for David Carradine's career. I grew up loving him on the television series Kung Fu. Several others in the cast are forming a sort of rotating stock company for their talented director. Uma Thurman, Michael Madsen and Samuel L. Jackson have all appeared in more than one of his movies. Having seen all five of Quentin Tarantino's films as writer/director I can state unequivocally that Kill Bill Vol. 2 is his best. He served us the gravy first, but this one is the meat and potatoes. 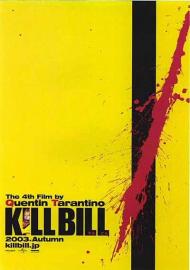