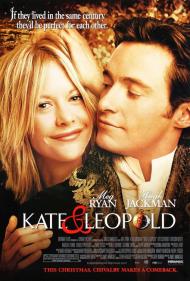 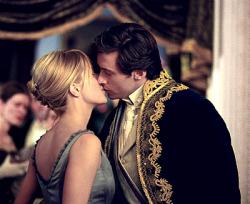 When I was little, I was able to get lost in things easily. A book, a TV show, or a movie, if good enough, would make me forget my surroundings, the stress of everyday life, the time of day, and any other outside stimulus. But as I've gotten older, it's become harder and harder for that loss of self to occur during anything. So when that rare movie or book comes along into which you are able to totally immerse yourself, you relish the moment. Such was the case last night when I saw Kate & Leopold.

Of course it helped that this movie starred Meg Ryan and Hugh Jackman, both of whom I am a huge fan of, took place in New York, which I also love, and featured time travel, one of my all time favorite plot devices. All of that, added to a sweet love story, and a great supporting cast, gives you two sensational hours worth of entertainment.

Meg Ryan plays Kate, an executive at a Marketing and Research firm, who's recently broken up with her long time boyfriend (Liev Schreiber). He's an eccentric scientist who's discovered a way to travel into the past. While visiting the 1870's he meets his great-grandfather, the Duke Leopold, who follows him back through the hole in time and winds up in modern day New York.

The rest of the movie is the story of Kate and Leopold falling in love and Leopold's attempts to blend into modern society. Most of the humor comes from his attempts and struggles to cope with the 21st century.

The romance is sweet and entertaining, mainly due to the extreme likeability of the two leads, and not because of anything overly original in that department, but it's still romantically done, with the appropriate candle lit dinner, long talks, and the various other usual romantic movie moments.

What really makes the movie work is the humor. From the opening speech at the building of the Brooklyn Bridge, right through to the end, the laughs keep the pace of the movie moving along quickly. So quickly, that I didn't even realize that the movie was two hours long until I looked at my watch after the lights went up.

Nearly the only big-name romantic comedy to come out this year, Kate & Leopold is the perfect date movie this Christmas and the perfect way to escape from the stress of everyday life. 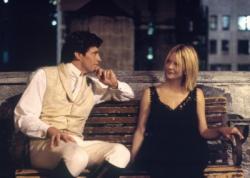 I am a big fan of time travel movies. I also am a sucker for a romantic comedy. When Harry Met Sally and Somewhere In Time are a couple of my favorite love stories, Kate & Leopold looked like a combination of the two films so I was eager to watch it. Sadly, it paled compared to either.

Scott has already given you the plot. Man travels through time and falls in love. Well, he sort of falls in love. The movie really gives no reason for the leads to be in love. They say they are and us the audience just have to accept it. However, that was not my big problem with this film.

The problem I had with this movie was the fact that Leopold so easily assimilates himself into the future. Sure there is the awkward crossing the street scene and some playing around in the bathroom, but otherwise he just melds right in with little difficulty. He even shows up everyone around him with his intellect and manners. His character really has no flaws. There is a brief hint at arrogance, but this man is from 1876, wouldn't some of his 100 year old views been considered sexist. None of that is touched on and Leopold comes off as a saint.

The character of Kate is also a bit far fetched. She at first does not believe Leopold is from the past, but as soon as she sees a photo, supposedly from the past, she is willing to jump off a bridge. Hasn't this intelligent career woman ever heard of doctored photos? Ah, but it is for love and this is a love story. Still, I would have an easier time watching this movie if the people in it reacted to something amazing like time travel a bit more.

On the DVD, there is the directors cut. It extends several scenes and adds a few. This is a better version. It gives a bit more info into Kate's character, as well as tries to give the movie a statement about the marketing, and sincerity of love. If only on this version some other scenes had been edited. 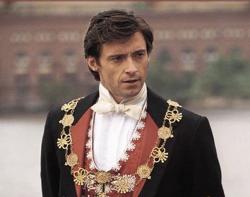 Although Kate & Leopold features an appealing cast in a lighthearted and amusing romantic comedy it is, as Eric mentioned, the victim of too many farfetched plot holes to be truly entertaining. Which is a shame really because the basic premise is quite intriguing. The idea of mixing time travel with romance has rarely been done (at least in recent big-budget Hollywood memory) and could have been the basis for a great movie.

This is not to say that Kate & Leopold is not worth watching. It has moments of genuine humor and the two leads are enormously likable and manage to make the dialogue sound much better than it really has a right to.

Still there is no real tension between them and the ending is downright absurd. The audience is supposed to accept that Kate, a modern career woman, is going to be able to adapt to life in the 1870's because of her love for Leopold. I mean how many women would give up the basic right to vote for love? Ah, but perhaps I am looking too deep into a movie that is intended to inspire feelings rather than thoughts.