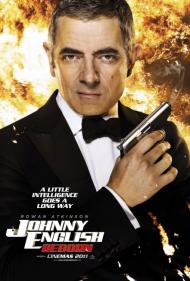 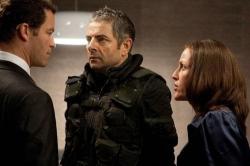 I was not a big fan of the original Johnny English, which might be a bit surprising given what a fan of British comedy I am in general and Rowan Atkinson in particular. I just found the humor quite juvenile and too much of it relied on slapstick, my least favorite form of comedy. I'm also not a fan of the spy spoof genre in general apart from Austin Powers. This sequel is an improvement on the original, but its humor still relies too much on the physical.

When the story opens, Johnny English, a spy for England's MI7, has retired to a Tibetan monastery following a failed mission five years previously. When a contact comes forward in Hong Kong with information, he says that he will only reveal it to Johnny, forcing him to come out of retirement and return to England. It turns out that there is a plot to assassinate the Chinese Premier, possibly with the help of a mole inside British Intelligence. It's up to English to bumble his way through his mission to stop the assassination and to uncover the double agent.

As a fan of serious espionage films and books, I've never really cared for the comic versions. I like my spies deadly serious with the emphasis on deadly. Roger Moore was always my least favorite James Bond. I think the reason I enjoyed Austin Powers while I don't enjoy other spy spoofs is that the world of Austin Powers is completely ridiculous while a movie like Johnny English seems to be set in the serious real world while Johnny English is the only ridiculous one. At least the first Johnny English film tried to give an excuse for him being on a mission by having every other English spy get killed at the beginning of the movie. Here though, he's so incompetent that there's no good reason for him to be kept on the mission.

I did enjoy spotting the James Bond references hidden throughout the movie. When Johnny English comes out of retirement he discovers that the person in charge of MI7 is now a woman, in the same way that the new Bond films have a woman in charge of the secret service. Only instead of Judi Dench, here we have Gillian Anderson looking quite sexy as a brunette. One scene takes place in the armory that could easily be mistaken for any scene ever filmed in Q Division. There's a golf game reminiscent of the of the golf game from Goldfinger. An assassin in the film is an old woman dressed as a maid, much like Rosa Klebb in From Russia with Love.  And the finale takes place in a fortress high atop a snow capped mountain similar to the one in On Her Majesty's Secret Service. And of course Bond Girl Rosamund Pike plays a fellow agent here as well.

There are some amusing moments in the film. My favorite is another scene taken from a James Bond film. Near the beginning of Casino Royale Daniel Craig performs an exciting chase on foot where he and the man he is chasing climb and jump their way across a construction site. Here, English chases a man in a similar fashion, but while the man runs and jumps, English always manages to find a simpler way around. When the man climbs a fence, English opens a gate and walks through. While the man climbs a bamboo scaffold, English patiently takes the elevator.

To be fair, several people in the theater I was watching this movie in did find it hilarious. They laughed quite loudly through most of it. I should also mention they were all under the age of 12. That will give you an idea of the level of humor on display.

As I said, this installment was slightly more enjoyable than the original, but I can't say I'm in any hurry to see another sequel made. 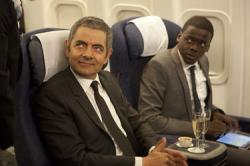 Rowan Atkinson is huge in much of the world outside the United States.  Mr Bean's Vacation and the Johnny English films are blockbusters in many parts of the world, while only modest successes state side.  My best guess is that his humor is mostly slapstick and that translates easier than any other humor.

This is best exemplified by such jokes as the kicking in the crotch or the lipstick scene.  My personal favorite is when he drinks from a glass and then asks the bad guy how he plans to disperse the drug.  The chase scene Scott mentioned is good.  I liked the end of that chase when he commandeers a yacht full of rich middle aged Brits who are all to eager to help him out.  The women suddenly find him attractive and start flirting with him.

My son and I missed Ben Miller as Bough.  His quiet demeanor was the perfect companion to the retarded acting Johnny English.   I am not sure why he was not in this film.  Many websites listed him in the credits for Johnny English Reborn.  He is replaced by Agent Tucker played by Daniel Kaluuya.  He is a very young agent who still lives with his mother.  He does an alright job but his presence amplifies just how old the gray haired Atkinson looks.  Miller is closer to his age and they had much better chemistry.

Speaking of age differences, Pike is 25 years Atkinson's junior.  She looks far too young and hot for him.  Also looking good is Gillian Anderson.  Twenty years into her career and this is the best she has ever looked!  Did her accent turn you on Scott?

I thought this a lesser effort than the first installment.  The set up is dull.  The age disparities are blatantly obvious, yet no one makes a joke about it.  The "vole", I mean "mole," was obvious.  Atkinson has a gift for pantomime not seen since the silent film days.  If you like those films you will like Johnny English.