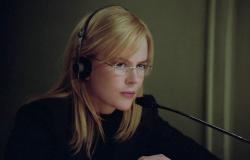 Nicole Kidman in The Interpreter.

Sydney Pollock may be 70 years old, but he isn't slowing down. His The Interpreter is a fast-paced, tense thriller that also features some top-notch acting from its leads, Nicole Kidman and Sean Penn.

Kidman plays Silvia Broome, a United Nations interpreter who, late one night, overhears an assassination threat against Zuwanie, a controversial African leader, who is coming to speak at the UN, the following week. Penn portrays Tobin Keller, a secret service agent charged with the protection of foreign dignitaries. He is assigned to Silvia's case after she reports what she heard, but not to protect her, as she assumes, but to investigate her.

The plot thickens when Keller learns that Silvia is from the same African country as Zuwanie, and that she may still have connections with the rebels there. He doesn't know whether or not she is telling the truth about what she heard. Of course, we the audience know she is because the moment she overhears the threat is shown on camera. It might have been interesting if it hadn't been, so that we too would have to wonder.

With only a few days until Zuwanie's arrival, the clock is ticking for Keller and his team to track down the would-be assassins. Among the suspects is an African exile living in Brooklyn. In one of the movie's best scenes, three of Keller's biggest suspects all converge on one bus with explosive results.

While you might expect action and thrills from a political thriller, with this one, you also get great acting. Penn, one of the greatest actors working today, takes his clichéd character (the no-nonsense law enforcement officer with a troubled past) and makes him admirably human. And although, Penn is outspoken about his political beliefs in real life, he is never allowed to bring them into this movie. Kidman is equally good, conveying mystery and terror, often at the same time. Even the supporting cast is populated with good actors, with most, no matter how small the part, being given enough personality to bring them to life, rather than just being the two-dimensional cardboard cutouts that we're used to in the backgrounds of movies like this one.

Pollack gives the movie an edge by creating a sense of urgency that is carried throughout most of the film. He also makes good use of the real United Nations, being the first filmmaker to ever be allowed to shoot a movie inside the building. If this is going to be the last movie he directs, at least he'll go out with a good one.

A sure sign of a good thriller is when the outcome is kept unknown. If you know how it's going to end, there are no thrills. I can honestly say, that with The Interpreter, I didn't know the ending. I had my guesses, but it wasn't until the final climatic moments that I knew whether I was right or not. In a time when most movies broadcast their endings from the moment the lights go down, that's a rarity, indeed. 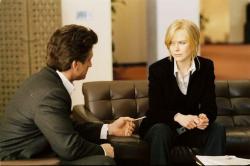 A good ending to a mystery is when the ending makes all of the puzzle pieces suddenly fit together. The Interpreter does just that. It is a series of twists and turns that ends right where it begins.

Pollack loves New York. So many of his movies are set there. He uses New York even better than Woody Allen. He also must love this particular piece of dialogue, "You think not getting caught in a lie is the same thing as telling the truth?" It is used in this movie and in his Three Days of the Condor (1975).

Penn's politics may not come into play here, but Pollack, in a cameo, mentions that the U.S. is not popular in the world right now. Not popular with whom Pollack? Dictators? Liberals? Countries that were benefitting from Saddam Hussein being in power? Popularity does not constitute what is right!

The Interpreter is the third movie in the past 12 months to show that the United Nations is an ineffective organization. Team America and Hotel Rwanda are the other two. The Interpreter demonstrates quite accurately that the U.N. is all about show. Can anyone actually mention one thing they have actually accomplished or law they have successfully enforced? I am waiting for the film that actually shows the U.N. as the bad guys. The one that shows how this all show and no action organization has been sucking up the United States tax payers money and accomplishing squat! 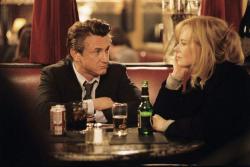 Like my brothers I really enjoyed this movie. I am not a big fan of Kidman's but thought her work here was very good. She plays an interesting character whom you get to know better and better over the course of the movie. I agree that Sydney Pollack is still at the top of his game.

Eric your response to Pollack's line about the U.S.'s lack of popularity in the world is way over-the-top. He is not passing judgment or saying it is deserved he is merely making an observation. Right or wrong many people around the globe see us as oppressors rather than liberators.

Very few movies today have as intricate a plot and as diverse a group of well-rounded characters as The Interpreter. Unlike Eric, I found this movie to be refreshingly free of a political agenda. It really doesn't take sides except to show that universally the world is filled with both good guys and bad guys. And it does so in an intelligent, well-acted, and beautifully packaged manner. The bus bombing scene in Brooklyn is a great, great screen moment.

The main villain is perhaps a bit too one-dimensional, but that is a minor flaw in what is otherwise a very solid movie.