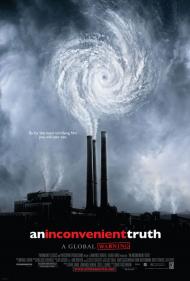 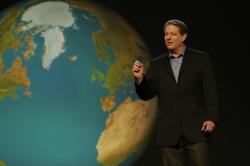 I had the good fortune to see Al Gore give his Global Warming lecture in person. I found him to be a good speaker, his science to be sound and his personality was warm and relaxed. As a speaker he was everything that he wasn't during his presidential campaign, where he was stiff and formal. During his lecture he reminded me of a really cool high-school science teacher who knew how to relate his topic in an entertaining and palatable manner. And if his speech was peppered with jokes and snide remarks against the Bush administration, this seemed fine since he was giving his speech at a left-leaning environmental organization and it seemed as if he just knew his audience.

The movie version of his presentation is not nearly as good as the live presentation for a couple of reasons. First and foremost, the central point of the movie doesn't seem to be about Global Warming, but rather about selling Al Gore as a saint, a human being and possibly a future presidential candidate. I can think of no other reasons for why the presentation is interrupted continuously by black and white scenes of Al Gore talking about himself and his life. And he narrates these scenes as if he were narrating a Ken Burns' documentary. I mean, I'm sorry that he lost his sister to lung cancer and all, but don't try to emotionally manipulate me with that fact.

Also still present in the movie are the jokes against Bush and other Republicans. An idiot teacher is said to have gone on to become Scientific Advisor to the current administration, as an example. If Gore's purpose is to seriously spread the word and wake the world up to the dangers of Global Warming, then he would do well to not alienate half his audience. But then, since I don't really believe the point of this movie is to spread the word about Global Warming, but rather to spread the word about himself, it does him no harm to try to score a few points against the Republicans.

During the scenes of Gore's actual lecture, where he stands in front of a live audience with a large screen behind him, the science still stands up. There are certainly more skeptics in the world than he gives credence to during his speech, but when the issue of Global Warming is kept out of politics and left in the realm of science, the facts are irrefutable. Those who try to disprove the science, do so for purely partisan reasons. That's the difference between science and politics of course, in science, facts actually matter.

But who am I kidding? Global Warming is purely a political issue, where facts mean little. The Left uses it to say that the Right is only concerned with big business and not the environment and the Right says that the Left is just trying to scare the public to get them on their side.

The Inconvenient Truth of this movie is that because of its biased tone and shameless promotion of Al Gore it is simply preaching to the converted. No one who was seriously skeptical about Global Warming is going to walk out of this movie thinking any differently than when they walked into it. 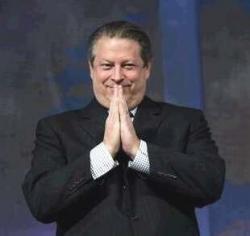 Al Gore tells more about himself than he does about the environment.

As a conservative, who has often scoffed at environmental issues, I was eager, and yes open minded, to see if Al Gore could convert me. I have changed my mind many times, I once voted for Clinton. But this film raised more questions than Al Gore was answering, such as; How do you tree huggers sleep at night when the sky in your world is falling so damn fast? And, Isn't Al Gore a hypocrite by contributing to CO2 emissions by flying and driving all over the world to give this lecture?

Like Scott, I came away from this movie thinking more about Al Gore than I did the subject matter. I would have taken his lecture more seriously had he left the politics out. But like John Kerry campaigning for office, Gore kept contradicting himself. Several times he said that this is a moral issues, but then he immediately makes a political statement or negative comment on the Bush administration. Why did he and Clinton not make all of these pollution/emission changes when they were in office? They had 8 years to do so.

Scott is correct that there are certainly more skeptics in the world than Gore gives credence to during his speech. Scott is wrong that the facts of Global Warming are irrefutable. Any search on the web can find plenty of articles that contradict Gore's opinion, and they include facts and how they came up with them. Gore never gives credit to his sources. He simply says "they" and "scientists" when trying to state where he got his information. He never actually says who conducted the tests to come up with the stats he uses. He just expects you to believe him.

Scott is also wrong when he wrote that, "Those who try to disprove the science, do so for purely partisan reasons." There is nothing to be gained by trying to disprove Global Warming. There is however, plenty to gain by trying to prove it exists, and man is the cause. If the government can convince the population that Global Warming is man made it can justify raising taxes to help fund programs. It can make laws and impede on individual freedom, in the name of doing the right thing for the environment. It can influence businesses and penalize those that do not follow their standard. Scott you could not be more wrong. Those who try to prove that global warming is man made, do so for purely partisan reasons.

Global Warming is part of the Earth's natural cycle. Man was not around during the ice ages and the following warming periods. How did the Earth change temperatures then? As the change of seasons prove, change is the very nature of nature, whether man is present or not. 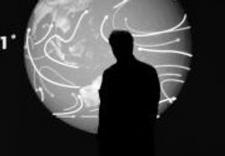 I once knew an older woman that smoked cigarettes in the early 1960’s. She claimed that they didn’t know cigarettes contributed to lung cancer and heart disease before the Surgeon General announced it in 1964. Hello! You’re sucking burning smoke directly into your lungs. Probably not a good thing. Well that is what I think of global warming. Hello! We’re burning all kinds of toxic fossil fuels directly into our atmosphere. Now we can nitpick all day long about the exact results but I think it is pretty obvious that this isn’t a good thing.

Now for the movie. Yes Al Gore is a self-important windbag. And while I do trust science, up to a point, I trust politicians about as far as I can throw them. I think Al Gore wants to be remembered as the Paul Revere of environmentalism. But as mentioned above this movie focuses too much on him and not enough on the issue. I also think he is a bit condescending and very stiff. And Eric, I agree with you on the point you make about wealthy individuals who preach about carbon footprints and then fly around in private jets. This is hypocrisy of the most obvious kind.

It has been nearly 3 years since this movie was released and it is already all but forgotten. It will be interesting to see if the years to come prove the movie prescient or false.