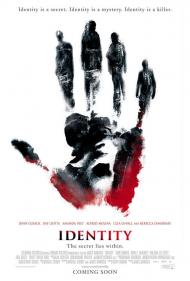 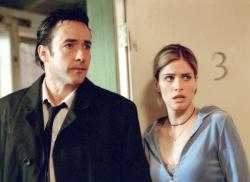 Identity begins as a classic old style 'whodunit' filmed with modern style.  A group of strangers find themselves trapped in a remote location with no way to communicate with the outside world, and one by one they begin to be murdered.  Three-quarters of the way into the movie however, a wrench is thrown into the plot, which is meant to be a cool twist, but instead left me feeling betrayed by the investment I had put into the movie and the characters up until the twist was revealed.

The movie begins on a dark and stormy night.  A mass murderer who is scheduled to be put to death the following day has suddenly been granted a last minute hearing due to a technical legality.  He is to be transported by car to the courthouse.

We then cut to an isolated motel in the same storm.  In a flashy and stylish way, with a nice use of flashbacks, we are introduced to all of the characters who find themselves pulling into the motel parking lot to escape the storm.  Among them are: Ed (John Cusack), an ex-cop turned limo driver; Paris (Amanda Peet), a prostitute on her way to Florida, Caroline Suzanne (Rebecca De Mornay), a has been actress; Rhodes (Ray Liotta), a prison guard transporting his prisoner; and a few assorted others.

Shortly after they are settled in, one of them turns up dead.  Her body stuffed in to a laundry dryer along with a hotel key chain with the number 10 on it.  And although the prisoner has escaped and is at first the prime suspect, at some point over the course of the movie, every character becomes a suspect.  As the body count mounts, each body is found with a key chain, counting down.

There's enough action and tension in this first part of the movie, with such a good cast, that you are sucked into the plot and really want to know what will happen next and who will turn out to be the killer.

But then slowly, as the plot unraveled, I began to have a horrible suspicion as to where the story was headed.  A suspicion that turned out to be true.  I won't reveal the twist here in the interest of suspense, but suffice to say it is a betrayal of everything that has happened to these characters and left me unable to care about their eventual fate.

Rather than a satisfying Sixth Sense-ish feeling when the truth is known, I instead felt angry at how the movie unfolded.  Personally I feel that the story as shown at the motel was strong enough on its own without the 'hook', obviously the writer/director James Mangold (Girl Interrupted), did not. 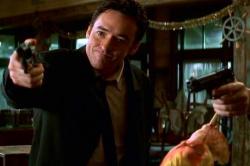 What Scott writes is a plot twist, is actually a plot revelation. It is so big that it makes 90% of the film moot. I was never so disappointed in any ending, of any movie, in my history of film watching. Sure it is supposed to be one of those ''wow'' moments, when the twist is revealed. In fact, it is a ''wow'' moment for about 5 seconds. Then you realize what you have been watching for the last 90 minutes was for nothing. This movie is a complete disappointment and waste of time.

I can write about how decent the cast is. I could comment on how far Rebecca De Mornay's career has fallen. I could repeat Scott's comment about the good set up. However, I feel so robbed by this film that I won't waste any more time on it.