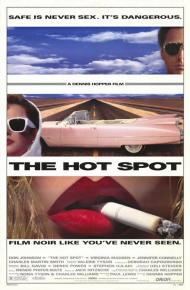 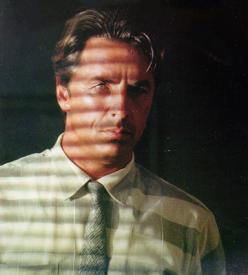 Don Johnson in The Hot Spot

This neo-noir film directed by Dennis Hopper is like a trashy pulp novel that you might read and enjoy at the beach. It's a stylish and tawdry little film that tries to evoke, with some success, the noir films of the 1940s where a stranger wanders into a small town and meets a femme fatale or two over the course of one hot summer.

The stranger in this case is Harry Madox played by Don Johnson. Madox is a man without a past, who breezes into a small Texas town and lands a job as a car salesman by virtue of his charm and looks. Fairly quickly he's involved with Gloria, the good girl played by the gorgeous Jennifer Connelly, and Dolly, his bosses' wife played by a scene-stealing Virginia Madsen who does her best to channel Barbara Stanwyck and Lana Turner.

Hopper directs with a stylish eye. The pacing of the film is pretty slow, but seems to suit the story. It's as if the plot doesn't want to move too quickly in the heat that permeates it. The clothes and the cars also give the setting a bit of a timeless feel. When the movie opens it's actually difficult to tell when the story is set. Madox's car and Dolly's car are both vintage and often the clothes seem old-fashioned. The sex and nudity in the movie is more of a surprise because of this seeming old-fashioned vibe.

Seeing this movie from the distance of a few decades seems to help it. If I had seen it in 1990 I'm quite certain that I would have looked at Don Johnson differently. He was so linked to Miami Vice at that time that it might have been difficult to separate him from that part, which would be a shame because he actually does a pretty good job here. His looks and likable smile work in his favor and yet there seems to be something darker lurking under the surface. I don't mean to heap too much praise upon him, but you should definitely put aside any preconceived notions before watching him here.

At nineteen, this was Connelly's first grown-up role. Hers is the smallest of the main parts and doesn't require the greatest range, but she performs it well enough and looks damn good while doing it. This is also the first time she appears nude in a movie, in a scene that makes watching this movie worth it by itself.

It is Madsen though who is the brightest light in the movie. From the moment she drives up in her giant pink car, she holds your attention. This is certainly the best she's looked in any movie that I've seen and like Connelly she appears naked a few times. However, it's not the nudity that makes her part stand out, it's her blatant sexuality and willingness to go after whatever she wants. She gets some good lines, such as "There's only two things to do in this town. One of them's watching TV...." and when asked about her husband, she replies, "He got what he paid for." Following sex she states, "That was more fun than eating cotton-candy barefoot." (a line that sounds better with her Texan accent) The title of the book this is based upon was "Hell Hath No Fury", and Dolly is the woman who gets scorned.

One of the great joys of reviewing movies is when you see one for which you had zero expectations but end up enjoying anyway. This isn't high art, but it is entertainment, which will be enjoyed even more by fans of film noir. 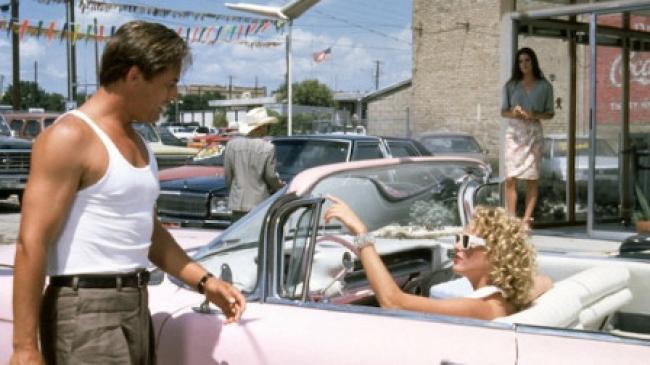 The Hot Spot lives up to its title. You can feel the heat, both weather related and sexual, exuding from the screen throughout this scorching little film. As Scott mentioned, it unfolds in a languid manner and has a timeless quality to it. This is helped by the fact that it was based on a novel Charles Williams wrote in the early 1950s called Hell Hath No Fury. He adapted a screenplay himself in 1962 for a vehicle meant to star Robert Mitchum but the script was shelved after that project failed to come to fruition.

Three decades later, Dennis Hopper updated it and -according to Hollywood legend- sprung it on his cast just days before filming began. The Hot Spot, which was originally intended to be a heist caper with a script by Mike Figgis, was now going to be an atmospheric neo-noir crime drama with plenty of steamy sex.

I agree about Hopper's direction. It is stylishly old-fashioned. He treats the very attractive trio of Johnson, Madsen and Connelly with a voyeuristic eye. Each of his stars gets lingering close-ups and disrobes for the camera. Don Johnson was 40 at the time but he still looked good. Sure the women are hot but Johnson's butt isn't exactly chopped liver either. Although he doesn't do a full-Monty he gets naked with both of his leading ladies. As my brother already wrote, there is plenty of female nudity on display for the hetero-men and Sappho-gals in the audience.

As in many of the classic film noirs of the 1940s and 50s, the protagonist is an antihero with a weakness for the opposite sex. There is often a good girl and a bad girl. Of the two it's the femme fatale that usually gets the guy. That is if she doesn't shoot him in a fit of jealousy or see him sent off to prison first. The guy is always smart and tough as nails except when it comes to dames. Then he becomes a hapless sap being led around by his crotch.

My only real complaint is with the title. The Hot Spot has the wrong sound to it for this moody piece. They should have gone with the title of the original novel, which far better suits the tone of the movie while also being more specifically apt. Virginia Madsen does indeed steal the movie as the man hungry Dolly Harshaw, holding Harry Madox's fate (among other things) in her hands. The ending -which I didn't see coming- is brilliantly appropriate. I'd be remiss if I didn't mention the music. It has a moody score composed by Jack Nitzsche and features an original collaboration between John Lee Hooker, Miles Davis and Taj Mahal.

If nothing else, The Hot Spot will make you want to go skinny-dipping on a hot summer's day. 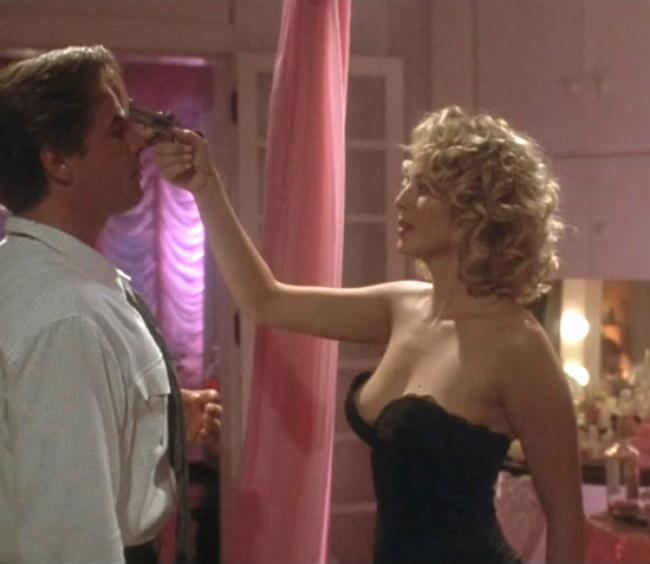 Virginia Madsen gets Don Johnson in The Hot Spot

Yes Patrick, Virginia Madsen steals The Hot Spot. She carries herself like a high priced hooker, who thinks she can be choosy with whomever procures her. Her line about "There's only two things to do around here." that Scott paraphrased, continues with her asking Don Johnson, "You got a TV?" After he answers, "No." She purrs, "Well, now you're down to one."

My brothers described the setting and it is fascinating. It could take place anytime between those post World War II years to present day. Some of the cars are classics while others are late 80s. The clothes, although too sexy for the 50s could be from any number of decades. Some rooms have old fashioned fans like the ones you may see in some old film. Harshaw lives in a house that looks like it was built around 1900.

What truly makes this film timeless is that everyone is either motivated by money or sex or both. Harry walks into town with sexual swagger and all the confidence of a sports team having a winning season. As Patrick noted, he is presented with two sexy dames to consider. Both desire him like a bear after honey. He wants one as she represents a path to a possible respectable future. The other is the type he has been running from his whole life. One of the more interesting aspects of the story is discovering whether or not these women are who they truly say they are. It takes Harry until the end of the movie to acknowledge his limitations, "I found my level and I am living it."

Don Johnson is surprisingly good as Harry but he should have probably been played by a younger actor. He is essentially a boy toy being led around, as Patrick wrote, by his crotch. His motivations are very base and simple. He never speaks of his past and truly has little prospects for a future. Had he been played by a younger actor his past would have meant less and his future less set in stone. As Johnson's Harry is clearly middle aged, we know his path is laid out in front of him in brick.

Until Scott reviewed The Hot Spot, I had never given it a second thought. I'm glad he did though as it is well worth the watch. Granted there is not much new here as everyone is playing archetypes. We have seen these characters before but they are such interesting ones that we cannot look away. After all, how many times in our lives have we been motivated by money or sex?