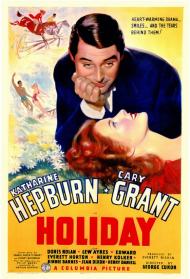 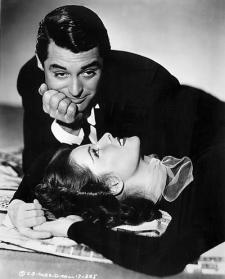 Made in 1938, and based on a play, Holiday makes a social statement about the hot subject of the time, money. As was the Hollywood trend during the depression, the rich are shown as miserable, while the working class are shown as noble. Hollywood was asking a country in a dire financial state to pay to see its product. I cannot blame it for catering to its audience.

Johnny has just returned to New York from a vacation, during which he met and fell for a girl, Julia. He goes to the address she gave him to meet her family and is surprised to find out that she lives in a huge home with her father, sister and brother. Her brother, Edward, is a drunk and her sister, Linda, is far too serious for her own good. She seems to have not gotten over her mothers death.

Julia wants Johnny to settle down to a career on Wall Street, making all kinds of money for them to live on as man and wife. Johnny has a plan to make some money and then just live on it for a while. He wants to have a kind of early, temporary retirement, to just enjoy life. Yeah, it is kind of a flighty plan, and in that lies the movies problem.

As this was made during the depression, the entire point of the film is that making money for money sake is a futile effort. Linda is very cool about their wealth, “What's the use of having all this jack around if it can't get us a superior kind of man?” She admires Johnny’s plans and finds herself attracted to him, as her sister becomes less and less supportive of him. “You've got no faith in Johnny, have you, Julia? His little dream may fall flat, you think. Well, so it may, what if it should? There'll be another. Oh, I've got all the faith in the world in Johnny. Whatever he does is all right with me. If he wants to dream for a while, he can dream for a while, and if he wants to come back and sell peanuts, oh, how I'll believe in those peanuts!” Linda ignorantly tells her. Does Linda ever consider that maybe Johnny will never want to settle down to a real job?

Most films about incredibly wealthy women falling for working class men are complete male fantasies. What man does not want a well rounded, educated, beautiful, refined woman who will love and accept him no matter what his financial state? After all, if a rich woman can love a poor man, the feelings must be sincere. In real life, how happy would a girl, who has never even had to make her own bed, be married to a man whose dirty underwear she has to clean all the time?

As this was a play it has very limited sets. The mansion is practically a character in itself. When Grant first walks into the foyer and sees the grand hall, with its double stairwell he says, “Judas.” “I beg your pardon?” The butler asks, “Er, I just said Judas. It didn't mean anything.” Linda has an affection for the play room on the third floor. She and her siblings enjoy it as children. Much of the movie takes place in it.

Although the plot never rang true for me, I did enjoy the cast. Grant was an acrobat in his youth and here he gets to do some gymnastic tumbling. I have always admired Hepburn for her acting but, especially when she wears the black dress and diamond necklace, was taken back by how beautiful she actually was. God must have carved those cheek bones out himself. Even though it's message is a bit heavy handed and unrealistic, Holiday is worth seeing for the legendary casting of two of the greatest stars in their prime. 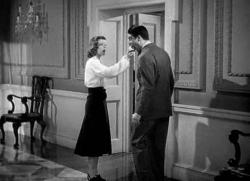 Katharine Hepburn offers Cary Grant a bite of her apple in Holiday.

This movie never implies that money causes unhappiness; it merely shows that it cannot always prevent it. The wealthy Seton siblings are sadly dysfunctional because of the death of their mother as children and because their father is a domineering control freak. Besides Hollywood during the Great Depression didn’t create a negative view of the rich, that concept goes all the way back at least to Jesus Christ. No matter how you interpret his statement that it is “easier for a camel to pass through the eye of a needle than for a rich man to enter my father’s kingdom” it’s not exactly a ringing endorsement of wealth.

Eric you sell this movie short or maybe you just didn’t pay close enough attention. Cary Grant’s Johnny Case is not some starry eyed college kid that doesn’t want to earn his way through life. He is a man that has been working steadily since he was ten years old. He has pulled himself up by the bootstraps to a banking career on Wall Street. Before he ever meets Julia he is, by all accounts, a hardworking and very competent success. The job her father offers is merely a promotion not an entry into Wall Street. At thirty, after twenty years in the workforce, he simply wants to use his hard earned cash to stop and smell the roses. I don’t think he will be expecting Linda to wash his dirty underwear any time soon.

Hepburn’s Linda has never recovered from the death of her mother (you got that part right Eric). The play room (which is on the fourth floor not the third) is her refuge, her symbolic womb if you will. It is the one place she feels safe and in control of her life and it holds many carefree memories. Her brother Ned also never recovered from their mother’s death and suffers from his inability to please their father, hence he drinks.

Lew Ayres of All Quiet on the Western Front gives a sobering performance. In one scene he gives Linda one of the best descriptions of what the experience of getting drunk feels like that I have ever heard. Julia, who at first seems sympathetic, turns out to be the stereotypical spoiled heiress, and is the least interesting member of the Seton family.

The Seton mansion is indeed a character in the movie. During the Gilded Age in New York City the rich built ostentatious mansions along 5th Avenue above 50th street. Very few of these show palaces remain today. When Johnny, who doesn’t realize the woman he met at Lake Placid is one of THOSE Setons, first arrives at the mansion he assumes she must work there and so he goes around to the kitchen entrance.

This plays a symbolic part in the story. Later after the New Years Eve/Engagement Party when Linda goes searching for Johnny she goes into the Kitchen. A part of the mansion she has clearly never been in before as this is the domain of the servants. It is the beginning of her freeing herself from this gilded cage.

George Cukor directs with a sure hand. He films the Seton Mansion with a practiced eye and graceful camera movements. Edward Everett Horton and Jean Dixon play Johnny’s friends, a professor and his wife. Their middle-class apartment and lifestyle brings a nice contrast to the ultra rich Setons.

Holiday is far more subtle and interesting than Eric says it is. Of the four movies Crant and Hepburn made together The Philadelphia Story and Bringing Up Baby are cherished classics while the more unusual Sylvia Scarlett and Holiday have been nearly forgotten. The gently comic and slightly melancholy Holiday just might be my personal favorite of the four. 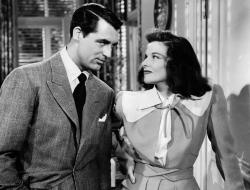 Eric, since you're always going on about Liberal Hollywood and hidden political messages and agendas, I'm kind of surprised you let this movie off so lightly. It's so completely anti-capitalistic that it equates the Seton family with the Nazis. The script seemed to be written by idealistic college students who are railing against the evils of society but only while very securely protected by the very same money that they're protesting.

The politics are made clear in several scenes. Most notably when Linda's cousin and his wife say that there could be the real opportunity to earn money with the right kind of government in place to which Linda replies knowingly, "Yes, but what kind of government would that be?" Later when Linda's father and sister enter the play room, Linda, Johnny and their friends greet them with a Nazi salute.

Both Linda and Ned hold nothing but contempt for their father and sister because they value money. This is very noble of them, I'm sure, but they're both content to go right on spending the money their father earns. If they really disaproved of their father's lifestyle, why didn't either or both of them move out and try to make it on their own? And Linda's speech about being with Johnny no matter what he does, is the most starry-eyed optimisim. When his money runs out, what then? She hasn't shown a willingness to live poorly before now so who's willing to say she will be when that happens?

Their are some nice moments in this movie and Grant and Hepburn share a nice chemistry. The best scenes are the lighter scenes between the two of them. It works when it's all played for laughs. One of best moments is when the two of them verablly spar on their first meeting. It certainly sets the movie up for some romantic comedy, but it's never completely fufilled.

This is really more a movie that I expect to come out of the 1960s than the 1930s, with its youthful idealism. What the writers via the main characters seem to fail to understand is that you can't spend your whole life inside a play room. Somebody has to pay for it and most of us don't have rich fathers we can safely rebel against even while they're paying the bills. 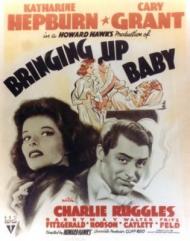 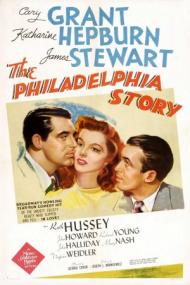