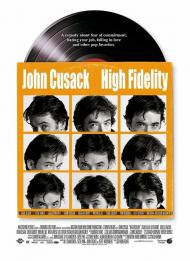 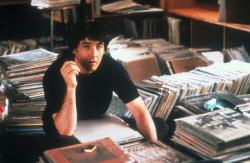 High Fidelity is one of my favorite books by one of my favorite authors, Nicky Hornby.  I've mentioned before that movies based on favorite books are hard to review because it's difficult to remain objective and not compare the two with the movie almost always coming off worse by the comparison. However, this film version, produced, co-written by and starring John Cusack, while not living up to the book, is very good in its own right.

Cusack plays Rob, a record store owner in North Chicago. The movie opens with Rob's girlfriend, Laura, dumping him. This prompts him to assess the major loves of his life and he tells the story of each of them to the camera in brief flashbacks. This in turn leads him to look up each of them and find out what went wrong and why he always ended up alone. While all this is going on, he continues to pursue Laura in an attempt to win her back.

Part of the reason that I've always felt such an affinity to this book and this movie is that I understand the characters so well. Rob employs Dick and Barry at his record shop and the three of them are obsessed with music. They constantly discuss music and make top 5 lists based on this or that musical topic. Now, I'm not obsessed with music, but I understand it, because I'm the same way with movies and I see a lot of myself and my two fellow movie buff brothers in these characters.

While Cusack is the heart and soul of the film, Jack Black is a comic scene stealer as Barry the sarcastic, vintage t-shirt wearing musical snob. I'm not always a big fan of his, but he is pitch perfect here as he prances with high energy around the record store casting scorn on those who know less about music than he does, which is everyone according to him. "Well, it's sentimental tacky crap. Do we look like the kind of store that sells I Just Called to Say I Love You? Go to the mall."

The rest of cast is also quite good. What John Cusack movie would be complete without an appearance by his sister Joan? She has a small part here, but gets a big laugh when she bursts into the store. Catherine Zeta Jones plays the big one who got away from Rob's past. And Tim Robbins is worth a laugh or two as the ponytail wearing aging hippy.

There are dozens of romantic comedies made each year and all of them seem to be aimed at women. It's so rare these days for one to be aimed at men, which is exactly who this movie is aimed at. Most comedies aimed at guys seem to simply involve their quest to get laid as if men have no interest in falling in love. In this movie, while Rob comes off as immature at times, it still treats men as having real feelings, as when Rob comes to this conclusion, "I can see now I never really committed to Laura. I always had one foot out the door, and that prevented me from doing a lot of things, like thinking about my future and... I guess it made more sense to commit to nothing, keep my options open. And that's suicide. By tiny, tiny increments."

When it was announced that this movie was going to be set in Chicago with an American cast instead of in London as in the book, there was a backlash from the book's fans. I'm actually glad of the change because it helps differentiate the two. If the movie had tried to completely duplicate the book it could never have succeeded, but by making itself just different enough while retaining the heart and soul of the novel, it manages to be a great movie in its own right. It easily makes it onto my top 5 John Cusack movies list.

These guys know more about music than your average Rob, Dick and Barry.

The guys in High Fidelity specifically love pop music but its appeal is universal. This movie was recommended to me when it first came out by an older couple that prefers classical music. They didn’t get any of the musical references made by Rob, Dick or Barry but they loved this movie. Like my brother I remember thinking that Eric, Scott and I were a lot like these guys. Coincidentally we started Three Movie Buffs just a few months later.

The way John Cusack narrates the story is reminiscent of Michael Caine in Alfie (only much less misogynistic). The opening scene with Rob speaking directly into the camera is well written and draws you in immediately. His opening monologue concludes with these questions, “Did I listen to pop music because I was miserable? Or was I miserable because I listened to pop music?”

I’ve never read the book so I don’t know how much of the dialogue comes from the original source and how much was added for the script. I do know that it is filled with clever and funny lines. Here are a few of my favorites…

Barry: “Rob, top five musical crimes perpetuated by Stevie Wonder in the '80s and '90s. Go. Sub-question: is it in fact unfair to criticize a formerly great artist for his latter day sins, is it better to burn out or fade away?”

Dick: “Marie de Salle's playing. You remember I told you about her. I like her. She's kind of Sheryl Crow-ish crossed with a post-Partridge Family pre-L.A. Law Susan Dey kind of thing, but, you know, uh, black.”

Barry: (after Rob has placed “Smells Like Teen Spirit” on a top five list of best first songs on side one of vinyl albums) “Oh, that's not obvious enough Rob. How about the Beatles? Or fucking Beethoven? Side one, Track one of the Fifth Symphony... How can someone with no interest in music own a record store?” (OK, so my older friends did get this reference).

The clever repartee never lets up when these three elitist record geeks are together. They provide the biggest laughs in the movie. The scenes with Rob and his different women are the heart of the story but not the most entertaining. Although it is Rob that gets the emotional arc as he goes from an aimless guy afraid of commitment to a true adult.

There are many familiar faces in supporting roles. Besides the ones Scott already mentioned there are Lisa Bonet and Sara Gilbert in small parts. Bonet plays an indie-type musician that Rob has a one night stand with and Gilbert is a nerdy girl that dates the Moby-esque Dick after he turns her on to an obscure band that sounds like Green Day. The script is excellent. Every character - no matter how small the role - is fully developed with unique personality traits.

In fact, in my opinion High Fidelity has one of best screenplays written in the past thirty years. It was completely overlooked by the Academy but did garner a Best Adapted Screenplay nomination at the 2001 BAFTA Awards. High Fidelity is a modern classic that will only grow in stature over time. 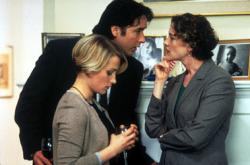 High Fidelity is a coming of age story about a man near 30 years old.  He looks back on the six important romantic relationships of his life, starting in Middle School.  "It would be nice to think that since I was 14, times have changed. Relationships have become more sophisticated. Females less cruel. Skins thicker. Instincts more developed. But there seems to be an element of that afternoon in everything that's happened to me since. All my romantic stories are a scrambled version of that first one."

What we learn of Rob is that he has not changed all that much since he was fourteen. He still blames the women in his life for the problems in their relationships.  He looks back on his past through rose colored glasses, blaming the women he loved for the break ups.  After looking back and reconnecting with some of them he discovers that the relationships were not as he remembered.

High Fidelity works as a coming of age story because Rob finally becomes a man.  He takes responsibility for his relationships and sees life with new found clarity. Near the end of the film Rob narrates, "Should I bolt every time I get that feeling in my gut when I meet someone new? Well, I've been listening to my gut since I was 14 years old, and frankly speaking, I've come to the conclusion that my guts have shit for brains."

As my brothers wrote, High Fidelity has many great lines.  My favorite is more profound than humorous.  "...what really matters is what you like, not what you are like... Books, records, films - these things matter. Call me shallow but it's the fuckin' truth..."  It is not a romantic approach to relationships but a very pragmatic one.

Scott and Patrick both mentioned how they saw the three of us in the store clerks.  I saw us in them as well, only about 15-20 years ago.   The guys in the film keep figurative and actual lists of things important to them.  Years ago I kept a list of how often I watched any video from my collection.  I don't keep it any more, I grew out of that.  Patrick has a list of every movie he has ever seen at a theater.  Quick Scott, what are your top 5 British comedies to not feature a member of Monty Python?