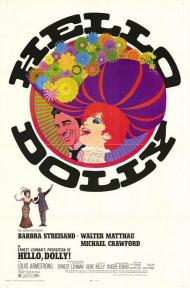 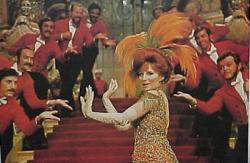 Besides being one of the last of the old-time Hollywood musicals Hello Dolly!, at a production cost of approximately twenty-five million dollars (in 1968 currency), is also one of the most expensive ever made. 20th Century Fox lavishly recreated several blocks of New York's 14th Street, circa turn-of-the-century, on its back lot. In addition the Harmonia Gardens set cost a reported $375,000 dollars to build. At any rate the end result certainly looks expensive.

With Gene Kelly directing and Barbra Streisand starring it is not surprising that the musical numbers are, with one exception, all highly entertaining. From the opening up-tempo 'Just Leave Everything To Me', to the final 'So Long Dearie' the songs are everything musical numbers should be. 'Put On Your Sunday Clothes', and 'Before The Parade Passes By' are both showstoppers as is the famous title song where none other than Louis Armstrong shows up to join Babs in duet. The only real clunker in the entire bunch is 'Ribbons Down My Back' sung by Marianne McAndrew as Irene Molloy.

The problem with the movie is with the story. Even for a musical it's a bit on the light side. Matchmaker Dolly Levi tries to set up three young couples while winning the hand of Horace Vandergelder (the well known unmarried half-a-millionaire) for herself. All the events in the movie take place within a twenty-four hour period. The two main scenes are the 14th Street parade and the dinner at Harmonia Gardens where all the characters convene for the movie's climax.

Streisand and Matthau have absolutely no chemistry together. From most reports there wasn't any love lost between them in real life either. Barbra was far too young for the role (Carol Channing created it on Broadway) and she seems to be doing a combination Fanny Brice/Mae West shtick. She does have some funny moments and her natural comedic flair pulls her through, but it was clearly not her most comfortable character to play. However, whenever she opens her mouth to sing magic happens.

Personally I love this movie. It is a happy, lighthearted, fun musical. It just lacks any real emotional connection with the audience and the plot is almost nonexistent. 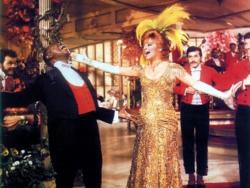 I have often mentioned that Barbra Streisand starred in one of the most perfectly cast films, The Way We Were. However, she was also in one of the poorest cast films of all time, Hello Dolly. As Patrick wrote, she is far too young for the role. The big musical number in the movie is Dolly Levi returning to a place where, years ago, she and her deceased husband frequented and were much liked. Streisand is 27 years old here. She is not old enough to reminisce about times gone by. Even though she is far too young for the role, Streisand is the one and only bright spot in the cast.

Walter Matthau fares even worse. He is first and foremost not a singer. Why the hell was he cast in a musical? He is also 22 years older than Streisand. They are one of the all time worst pairings in Hollywood history.

Patrick is correct that Streisand belts out many memorable songs. The problem is the rest of the cast. Although he would eventually originate the role of the Phantom in Broadway's Phantom of the Opera, Crawford is just an annoying geek here, as is fellow Broadway star Tommy Tune.

Gene Kelly directs with an eye for movement. The movie constantly moves along, through song, dance or just having characters walk down a street. Although the cast keeps moving, the plot never really gets anywhere during it's nearly 2 and a half hour running time. Gene Kelly shot far too much film for this movie. Several songs and dances should have, and could have, been edited. Kelly may have not known how to direct this overblown musical but he would have made a great music video director, where the singing and dancing only last 4 minutes. 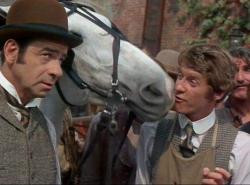 This is a flawed movie, there's no question of that, but at the same time there are some enjoyable moments.  At nearly 2 and a half hours it is far too long.  Just a simple edit job that removed at least 45 minutes would have covered many of the flaws, although not all as there is the problem of the casting that both of you, Eric and Patrick, mentioned.

Streisand should really have waited 20 years before taking on this part or the writers should have rewritten some of the lyrics and dialogue to take into account her age.  As Eric said, when she's reminiscing about times gone by and about how long she's been alone since her husband died, I just kept thinking, 'Well how long can it really have been?'.  She needed to grow into this part.

Ironically though, despite being too young for the role as written, Streisand is also the best part of the movie.  When she's belting out a tune you can forget for the most part the rest of the movie's problems.  And where her youth does benefit her is in that she has lots of energy and she bounces around the movie with verve and life, brightening the screen as she goes.

I'm a fan of Walter Matthau.  Nobody played the crotchety old guy better than him, but he is so far out of his depths here that it almost seems as though someone lost a bet and had to cast the least suited person in the world to play Horace.  The two times he "sings" should have been the first things cut when they started editing.

A major problem with the plot is that I was never really rooting for Dolly and Horace to get together.  I never felt they loved each other.  It seems like Dolly is gold digging and Horace just wants a servant, so there's not much love in the love story there.  And I certainly never felt anything about Horace's niece and her fiancee, so there's more that could have been cut.

I felt more connection with Michael Crawford's and Danny Lockin's characters as the clerks out for a good time in New York City.  I enjoyed Crawford's "It Only Takes a Moment" song and their group's "Elegance" number.  I empathized more with their storyline than I did with any of the others.

You certainly can't fault the look of the movie.  The turn of the century New York City set is impressive as is the cast of thousands who populate it.  No expense seems to have been spared on any of it and so at least there's always something look at.

I can't say I love this movie, it's far too uneven for that, but I did enjoy large portions of it.  And it did make me wish that Streisand had made more musicals.  Although she sang on the soundtrack for more, she really only made six musicals her whole career.  Unfortunately her best movie years took place during the decades where the musical was most out of fashion.