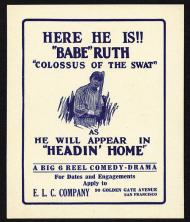 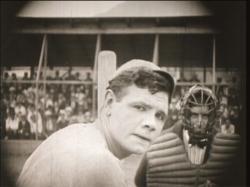 In 1919 Babe Ruth was sold to the New York Yankees from the Boston Red Sox. He was, at that time and for the next decade, the most famous athlete in the country. Headin Home was the first of the ten films he would appear in.

Babe Ruth plays himself, or rather a fictionalized version of himself. In real life, Babe grew up in Baltimore, Maryland, where his father ran a bar. Babe spent his youth getting into trouble and was eventually sent to live in a reformatory. In Headin Home, Babe lives in a small town with his mother and young foster sister. He is in love with a girl named Mildred, whose banker father, Cyrus, owns and manages the local baseball team in which Babe is a player.

Cyrus brings a new pitcher, Harry Knight, to town where he is not only put on the team but also given a job at the bank.  Cyrus sees Knight as a future husband for Mildred. He and Babe quickly become rivals for her affection.

After getting new uniforms, Knight threatens to leave if Cyrus gives Babe a uniform. Babe quits the team but is quickly hired by the other team to pitch for them.  After Babe hits the winning homerun for the visiting team, the townspeople become so angry, that they chase after him. They corner him on some stairs where Babe brandishes a bat. A title card then reads, “The crowd ran Babe ragged but th’ minister got up in time to save th’ mob.”

His homerun was so impressive that Babe goes away to play professional baseball. He soon becomes a big star, making lots of money. Near the end of the film he returns to his small town, hence the film’s title.

In 1920, this film may have been a way of reintroducing Babe Ruth to a new set of fans but it is truly not a very good film. There are too many characters doing too much of nothing. The camera should have rarely left Ruth.

Viewed today it is only interesting in seeing the Sultan of Swat at the young age of 25. It is otherwise a tedious chore to get through. It only comes to life when Babe is playing ball. Even at the time of its release it was not well received. Variety wrote in September 24, 1920 that, "The story as a story is ridiculous and isn't convincingly enacted. It couldn't hold the interest of anyone for five seconds if it were not for the presence of the great athlete. He and he alone, makes it worth five minutes of anybody's time." That was true then and is still true today. 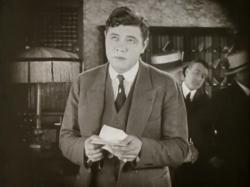 This clean-cut, straitlaced portrait of Babe couldn't be more opposite to the real Ruth. He was well known to be a man of huge appetites, consuming vast quantities of alcohol, women, and food. Legends of his exploits live on to this day. In 1927, the New York Times referred to him as the "Playboy of Baseball", but times were different then and the newspaper reporters who were in the know were also friends with Ruth and so turned a blind eye to his wilder shenanigans. Despite this publicity whitewash, it would take a naive person indeed to believe the wholesome image presented in this film.

Eric called Ruth the most famous athlete of the 1920s, but he was arguably the most famous person of any profession. He met and partied with other celebrities from all walks of life, including Hollywood and Washington D.C.. Baseball really was America's favorite pastime in those days and Ruth was bigger than baseball. In those pre-television and even pre-radio days, fans would follow his season in the newspapers and several papers devoted a daily column exclusively to the Babe. When Ruth tried to sue a company that was using footage of him as part of a series of instructional films, the judge threw the case out, proclaiming that Ruth was so famous that he could be photographed without his permission. A movie featuring him must have seemed like a natural way to take advantage of his burgeoning fame and give many people their only chance to see him in action.

Although putting Ruth in a film might have seemed like a good idea, that was apparently the only good idea the filmmakers had. The finished film is a cliche ridden bore that relies on a host of silent film tropes and is reduced at one point to having Babe rescue a pack of puppies from the evil dogcatcher. The title cards, written in colloquial English do provide a few chuckles, but even those are few and far between.

Even the baseball scenes are disappointing. After decades of televised games, the MLB and Hollywood have perfected the art of showcasing a baseball game. The makers of this film lacked that experience and there's very little suspense in the game and even less emotional weight resting on the outcome of the game, which, let's face it, is never in doubt anyway.

The action and the comedy also isn't helped by the fact that the quality of the surviving print isn't very good. As with most films in the public domain the quality can vary greatly depending upon where you watch it. The entire film is available on YouTube, but in a very grainy version.

According to legend, Ruth was paid $25,000 to appear in the film. A sum of which he was so proud that he refused to cash the check and would instead pull it out to show at parties. Supposedly when he did finally get around to trying to cash it, the film company had gone bankrupt and the check was worthless. The same could be said about this movie. Apart from the novelty of seeing Ruth, it's virtually worthless. 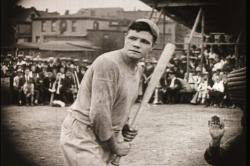 Babe Ruth as himself in Headin' Home.

I concur with my brothers, Headin' Home is poorly written, badly shot, and horribly acted. Except as an historical artifact this film has nothing to recommend it. Unlike my brothers I'm not a huge fan of America's Pastime. Sure I know Babe Ruth was great but I know only a few scant details of his life. Trust me this isn't the place to learn more about him. Although this movie does demonstrate the fact that he was no actor. Other than in the relatively few scenes on a baseball diamond he isn't even convincing as himself.

The only real enjoyment to be found is in reading the title cards. As Scott mentioned they are filled with lines featuring hilarious 1920's vernacular like, “Get on to yourself, and blow.” Which sounds like a reference to a very difficult masturbatory act but really just means, “Wise up and scram.” Another amusing one refers to, “...a second story man in a one story town.” In my head I could practically hear these lines being spoken in a brash, reedy newsreel voice.

Unfortunately the rest of the movie is a bore. About the only other thing of interest was the scene where Ruth chops down a tree to make a bat. I guess the writer of The Natural must have seen this movie as a kid. Instead of trying so hard to turn the Bambino into a saint they should have stuck to the facts. Even a cursory search online reveals just how much of his life they fictionalized. But if you are going to falsify the details of someone's life at least make it more exciting and compelling than the truth. The makers of Headin' Home failed to do even that.