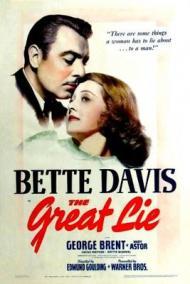 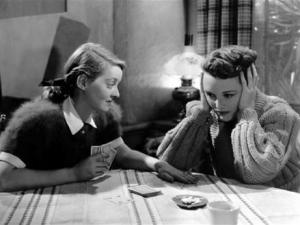 Bette Davis and Mary Astor in The Great Lie.

Mary Astor had a good year in 1941. She starred opposite Humphrey Bogart in the John Huston classic The Maltese Falcon and won the Supporting Actress Oscar for her role as the arrogant, bitchy concert pianist Sandra Kovack in The Great Lie. Even though this is a typical Warner's vehicle for its top female star Bette Davis (Edmund Goulding directing, George Brent co-starring, score by Max Steiner), it is Astor you see chewing up the scenery and walking away with the movie.

One scene in particular is a standout. She throws a fit when Davis' character catches her raiding the fridge in the middle of the night. You see she's pregnant by George Brent, Davis' husband, (whom they both believe to be dead from an aviation accident in South America) and Davis has vowed to keep Astor on the straight and narrow until she gives birth to Brent's child. Anyway when Davis complains about how much food Astor is gorging on, Astor snaps, "I'm not one of you anemic creatures that can get nourishment from a lettuce leaf! I'm an ARTIST!" Poor Bette Davis. Usually she is the one with the meatier role, but in The Great Lie she is in her best self-sacrificing, goody two shoes mode.

Of course later, after Astor has given birth to a son, that they have agreed Davis will raise as her own, hence the movies title, they learn that Brent is actually still alive. The final section of this soapy melodrama deals with the resolution of the love triangle.

Davis' character being a genteel southern woman, means the usual assortment of black stereotypes are on hand. Hattie McDaniel is - guess what? - a maid. Although she does, as she nearly always did, steal a few scenes, it remains one of Hollywood's deepest shames that this talented actress was never given more fully developed characters to play.

To modern audiences the high drama of The Great Lie probably plays more like comedy. You have to get yourself in the right mindset to fully appreciate the stilted dialogue and heavy-handed emotion displayed in this early chick flick. Movies of this time and genre are not subtle. They do, however, cut right to the heart of human emotion by first presenting our feelings in their most pure forms of jealousy and love, and then magnifying them to the size of a billboard.

One unintentionally hilarious moment occurs when a character says to Davis, "You smoke a lot don't you." The compelling talents of Mary Astor and Bette Davis as they compete for one man's love make this movie watchable and overcome the far-fetched plot and plodding direction.