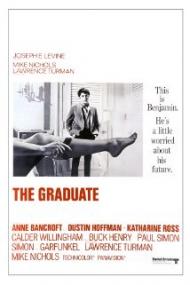 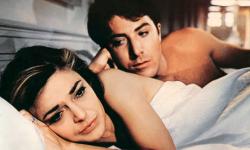 Anne Bancroft and Dustin Hoffman in The Graduate.

The Graduate is, without a doubt, an iconic American classic that helped redefine cinema at the height of the counter culture revolution of the late 1960s. It was groundbreaking in its depiction of sex, as well as in its camera movement and editing style, and hugely influential in its use of pop songs to underscore scenes. Mike Nichols won the Best Director Oscar in what was just his second time at bat. The Graduate also launched the career of Dustin Hoffman who would go on to be one of the great male movie stars of the latter half of the 20th Century.

Based on the 1963 novel of the same name by Charles Webb, this is the story of Benjamin Braddock, the titular scholar. This movie depicts the events of his first post-college summer, spent at his parent's house in Southern California. Benjamin has no plans for his future and he's overwhelmed with a feeling of isolation (brilliantly depicted by Nichols in several scenes, most notably when Benjamin is submersed in scuba gear in his parent's swimming pool). There is the famous scene where he gets one word of advice from a friend of his parents, “Plastics.” But Benjamin is content to spend his time lazing about the pool soaking up sunshine.

And then he takes Mrs. Robinson home from a party one evening. She wastes little time cornering him in her daughter's bedroom and disrobing, prompting Benjamin's famous statement of the obvious, “Mrs. Robinson, you're trying to seduce me.” The scene where they have their first tryst at the hotel is hilarious (it includes a comic turn by Buck Henry who also adapted the screenplay). In fact it is almost too funny for the rest of the movie, which has a decidedly more dramatic tone.

This shift begins to occur when Benjamin discovers that he and Mrs. Robinson (none of the middle-aged adults in the movie are given first names) have nothing in common but sex. After much prompting he does get her to open up a bit about her past; she reveals that she was pregnant when she got married. But she makes it clear that sexual gratification is the only thing she requires of him.

The real shift in tone happens when Benjamin reluctantly takes Mrs. Robinson's daughter Elaine out on a date. From this point on there are only occasional glimmers of humor. He is at first purposefully rude, even going so far as to take her to a sleazy strip joint. After Elaine breaks down sobbing, Benjamin kisses her and falls head over heels. She leads Benjamin on a chase up to Berkeley before the story heads to its famous climax at the church, where the young lovers make their escape on that bus to nowhere. And all to the tune of Simon & Garfunkel.

When I saw this movie as a teenager in the 80s I remember being completely caught up in the romance between Benjamin and Elaine. I thoroughly believed in their happily ever after. Although to be honest I didn't really spend much time thinking about their future together. Now I realize that Nichols is strongly suggesting the opposite. That it's more likely these two young lovers are destined to turn out similar to their parents. He'll probably wind up in plastics and she'll be a discontented housewife. Despite this one act of youthful rebellion, they aren't really rebels at all.

If anyone in the movie is a rebel, it's Mrs. Robinson, so brilliantly depicted by Anne Bancroft. She's selfish and bitter but at least she has some depth, unlike Benjamin and Elaine who come across as completely shallow. Not to mention lacking in impulse control. But then aren't we all when we're young and in love? The Graduate was undeniably groundbreaking and it remains quite subversively funny during its first half. And, although the second half no longer possesses the romantic intensity it once had for me, now that I see the ending for what it really is, it has actually improved over time.

Katharine Ross and Dustin Hoffman in The Graduate

When I first saw The Graduate, I too saw it as a romantic comedy with a happy ending. Watching it now, I realize that the point of this film is not a love story at all but one of rebellion. Even more important is that, as Patrick wrote, the ending is anything but romantic.

Ben is under his parent’s control. The scuba scene not only represents his isolation but also his lack of freedom. They force him into the scuba gear and every time he comes to the surface, his father pushes him back down. It is after that scene that Ben decides to take Mrs. Robinson up on her offer to take his virginity.

The scene of Ben getting the room for his first tryst with Mrs. Robinson is humorous but by no means too much so. All through the process of his first time, he once again is under the instruction of someone older than himself. He nearly backs out until Mrs. Robinson manipulates him by calling him inadequate, and he must prove her wrong.

Ben is now getting sex at a regular rate but it does not seem to make him any happier. What it does do is to give him the confidence to stand up to his parents. Note the scene in the pool where his father asks him what he is doing and he responds, “Drifting…” Before, Ben would have done whatever his father wanted, but now he does not care so much. Sex allowed Ben to grow his balls.

I do not believe that Ben falls head over heels in love with Elaine so much as he finally finds someone his own age to spend time with. Unlike everyone else around him, Elaine demands nothing of him. She takes what he can give, even going along to the strip club she obviously does not want to be in. After that one and only date, he decides to stalk her and determines that he is going to marry Elaine.

Ben journeys to Berkley and continues to spy on a girl who made no effort to contact him after discovering that he and her mother were fucking. What makes Ben think she has any interest in him, let alone want to marry him? Ben is a bit mentally off. They talk several times but during none of the conversations does she express her love for him. At best, she sends mixed messages, telling him, “I don’t want you to leave.” but answers his marriage proposal by stating she might, all the while being engaged to another man.

Elaine’s father visits Ben and tells him to leave Elaine alone. Her parents convince Elaine to marry her fiancé. He races to her home where he runs into Mrs. Robinson who states, “We have everything quite under control.” As an act of pure rebellion, Ben goes to the church on the day of the wedding and we see the confrontation that ends with Ben and Elaine escaping on the bus.

At no point in this film do I believe that Ben and Elaine are actually in love. Their relationship seems based more on acting out against what others want them to do than an actual well thought out decision. Notice how Elaine looks at her parents and her husband in the church before yelling for Ben. She is not so much running away with Ben as she is running away from her life. Look at their faces as they sit on the bus as if they are thinking, “Now what?” Their silence speaks volumes.

I agree with most of what Patrick wrote, except that Ben and Elaine are in fact rebels. The point of this film is that they were indirectly made rebels by their parents trying desperately to control them. The Graduate is a very dated movie in style and soundtrack, but its theme of generational disparity is timeless. 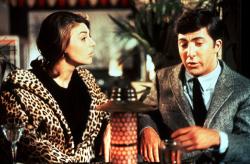 Anne Bancroft and Dustin Hoffman in The Graduate.

Like my brothers, I found that I got more out of this movie watching it now at the age of the grown-ups than I ever did when I was Ben and Elaine's age. For instance, how did I ever miss the fact that Mr. Robinson is gay?

Ben and Elaine are rebels in the sense that they rebel against their parents wishes, but it's a rather tame rebellion. Ben wants to marry Elaine, which is a fairly orthodox thing to do. They're a long way from the counterculture of the era. They're not looking to change the world, just find their place in it. In the 2007 sequel to the novel this film is based upon, Ben and Elaine are married and living in the suburbs of New York City, in a lifestyle not too far removed from the one their parents enjoyed.

I too don't believe that this young couple is truly in love. Ben is, as he says, drifting through life after college with no real purpose. Elaine suddenly gives him purpose. He will win her back and get her to marry him. It's a cause that suddenly motivates him to be proactive. It's the first decision that he makes on his own. It carries him right up until that final scene on the bus where you see on his face that now that he has what he set out to attain, he doesn't know what to do next. Elaine, on the other hand, is caught up in the romance of the moment. Carl, her fiancee, is shown to be a pipe smoking stuffed shirt that her parents want her to marry. His marriage proposal consists of the phrase, "We'd make a pretty good team." Compared to that, Ben, with his obsessive behavior and declarations of love, seems excitingly romantic.

Of the acting, Anne Bancroft is the stand-out. She brings depth, subtlety, and a melancholy sadness to the part that goes far beyond what is in the script. Her part is now iconic as the prototype for all future screen cougars. For some reason she was nominated for Best Actress for this role instead of Supporting Actress and lost to Katharine Hepburn for Guess Who's Coming to Dinner. Perhaps the studio didn't want her competing with her co-star, Katharine Ross in that category, but in any case she deserved the award over both Katharines, and Supporting Actress winner Estelle Parsons who won for Bonnie and Clyde. Hoffman is good, but is best in the lighter, comic moments. Ross's nomination surprises me because her part isn't that big or demanding, but she is very cute, in a late 1960s style.

Eric mentioned that the soundtrack is dated, and it is, but it was groundbreaking in its day. The way it worked in popular songs, all by Simon and Garfunkel, into the story, has become standard practice in such films, but was new at the time. Although the method is still a little rough here, as in when they repeat "Scarborough Fair" three times in a row during Ben's stalking of Elaine. The soundtrack is particularly effective during the neatly edited together montage of Ben and Mrs. Robinson's affair.

I don't believe this film has improved over time, just that it takes a level of maturity that most of us don't have at a young age to appreciate it. As Eric wrote, its themes are timeless.