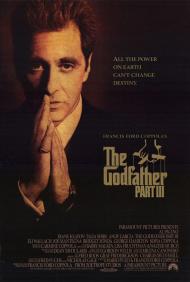 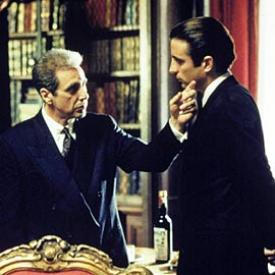 The third installment in The Godfather saga is generally regarded as the red-haired stepchild of the trilogy. Although it did earn an Oscar nomination for the Best Picture of 1990 it fails to live up to the first two movies, both of which took home that most coveted movie prize. The Godfather III is a solid three star movie, but when you are following up two of the greatest movies ever made, a solid three stars is a bit underwhelming.

At any rate Francis Ford Coppola (and writer Mario Puzo) did make this third visit with the Corleone family. It is 1979 and Michael has gone legitimate. He has set up a philanthropic organization in his daughter’s name. He attempts by bribery (oops I mean charitable donation), within the Catholic Church, to buy a majority stake in an international conglomerate.

This eventually leads to Sicily and a showdown with old-timer Don Altobello (Eli Wallach) (an ancient associate of Vito’s and godfather to Connie) and his hired assassin. Altobello has long been double-crossing Michael in a move for power.

Michael, meanwhile, takes his dead brother Sonny’s bastard Vincent (Garcia) into the fold and grooms him to be the next Don. Vincent falls for Michael’s daughter Mary (future director Sofia Coppola); she is also his first cousin. Vincent must choose between taking over the family business and Mary’s love.

All the main players unite for the climactic scene at the premier performance of Michael and Kay’s son Tony’s opera debut in Sicily.

The theme of this movie is redemption and that it can come at a very high price. Michael can’t seem to get over his guilt for having ordered his brother Fredo’s murder in the second Godfather. In his best scene Pacino confesses his sins to a priest and breaks down in tears. Unlike his father Vito, Michael cannot escape his conscience. Whereas Vito always saw himself as the good guy doing what was necessary in a vicious world, Michael is incapable of such self-deception. He is being eaten alive by the knowledge of his own evil acts. He can wash the blood from his hands but not his soul.

The storyline is decent; and for the most part the Corleone family remains riveting. Talia Shire steals the show as Connie. She has now become the grand dame of the Corleone family. A stylish black widow with a penchant for poison, she now wields nearly as much power as Michael. Garcia is good as Vincent. He shares his father's hair trigger temper and violent streak but demonstrates more self control. It is only Sofia Coppola’s Mary that is a disappointment. She has very little personality, is poorly written and is hampered by a flat performance from the director’s daughter. Such are the perils of nepotism I guess.

The climactic scene is well shot even though it becomes an acting contest between Pacino and Keaton over which of them can be more hysterically tragic. Although it adds little to the franchise Godfather III is not the embarrassment it has been made out to be over the years.

Sofia Coppola and Andy Garcia in The Godfather: Part III.

It's not a total embarrassment, but it's definitely an unneeded installment in the franchise. Coppola himself has said that the true Godfather Saga is parts 1 and and 2 and that 3 is merely an epilogue. It's also pretty well known that the only reason he made part 3 is because his career and finances were in shambles after a string of flops and he needed the money Paramount had long dangled in front of him to make a third installment, but that he'd been able to resist when he was affluent. He gave it a fair shot, but ultimately I wish he hadn't bothered to try.

The movie's problems are numerous, but perhaps the greatest is simply that the plot isn't engaging enough. This is the shortest of the 3 films, but feels the longest. The third act in Sicily in particular seems to drag on far too long. Michael and Kay's day out together with the kinder, more gentle Michael on full display, should have been cut completely. These films were never love stories and this angle isn't needed. Was Coppola trying to appeal to female audiences this time around? The first movies were perfect examples of male soap operas, but this one is too often just plain soap opera.

Sofia Coppola has often been held up as the movie's worst problem, and it's true that she's not a very good actress, but her part isn't very large and actually impacts the film very little. Sure, Julia Roberts or Winona Ryder, both of whom were attached to the part at one time or another, could have added more to the character, but the success or failure of the film doesn't depend on the character of Mary.

A bigger character problem is the absence of Robert Duvall as Tom Hagen. Duvall wanted equal money with Pacino and Coppola wouldn't budge and so simply rewrote the script to say that Hagen had died. His part is replaced by George Hamilton in a non-descript role of the family lawyer. John Savage takes up screentime as Tom's son, in a needless part.

The most interesting new character in the film is Garcia's Vincent. The first Godfather was about Michael taking over the family when all he wanted to do was become legitimate. This installment should have been about Vincent taking over the legitimate family business and taking it back into illegal territory. The script touches on this, but with too many distractions.

There is also a notable change in the character of Michael. By the end of the second film he has become a cold calculating machine. It's hard to imagine that he would ever seek redemption for anything that he'd done. He's a changed man when this film opens. He's much more like the Michael of the first film. It's not that I can't see him making that transition in reverse, I just never felt that the script showed that process. Is he just old and scared of dying with so much blood on his conscience?

I did enjoy the way the script worked in real life events, such as the Vatican banking scandal of the late 1970s and the suspicious death of Pope John Paul the 1st after just 33 days as Pope. Those details and the cars are really the only things to indicate the time period the movie is set in.

A final polish of the script and a much tighter edit job and this could have been a movie that actually added to the saga. Instead, while possibly better than its reputation, it simply leaves you feeling deprived of what might have been with the proper time and care applied to it. 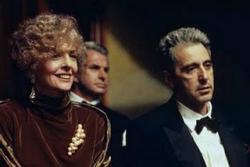 I have a very distinct memory of this film.  Scott and I were in a theater waiting for a feature to begin.  The lights go out as the trailers are about to begin.  We hear the familiar theme music by Carmine Coppola, as the previews for The Godfather: Part III start.  So ingrained was that music and those movies in my brain that my pulse raced at the thought that a third installment was coming out.

The anticipation for this film was great and no one besides George Lucas could possibly know what stress Francis Ford Coppola felt trying to make a film that would live up to the standard he himself set.  Like Lucas, he was not able to reach the heights of greatness that he once did, but The Godfather: Part III certainly fairs better than the abominations Lucas came up with for Star Wars and Indiana Jones.

The greatest strength of this series is the characters and their history.  Anytime any of the original characters share a scene the movie is a joy.  However, with the absence of Robert Duvall as Tom Hagen, there is only Pacino, Keaton and Shire left from the old guard.  Every time Hamilton or a couple of other characters spoke, you feel the absence of Hagen all the more.  We have no idea who Hamilton's character is and we never care either.

Coppola understood the importance of the history of the movies and milks it often.  On Michael's desk you can clearly see a picture of Robert De Niro as a young Vito Corleone and another picture of Marlon Brando and James Caan as an older Vito and Sonny. Vincent takes Mary to the old neighborhood to show her the original Olive Oil company Vito used as a front.  When in Sicily they go to the old house Michael stayed at in the first film where his first wife died. Other than a pointless reference to his widow and son, there is no real mention of Tom Hagen.  Was Coppola so pissed at Duvall that he purposely decided to screw the character over as well?

By the end of Part II, several key events have occurred in the family. The first is Kay's betrayal. That plays out in the redemption aspect that Patrick mentioned. The second is the murder of Fredo that still haunts Michael.  Another interesting thing was that Michael downgraded Tom Hagen's role in the family business.  It clearly bothered Tom deeply.  This plot device is obviously not revisited but it could have played greatly into the entire film.  When Michael says "Our true enemy has yet to show his face." we would have felt a chill of just how close that enemy may be.

Although this is a film of what ifs, it still has some things to offer.  The first scene of Kay and Michael is riveting. Michael, "Alright, can we talk now? Common sense?" Kay, "Alright. Tony knows you killed Fredo."
Michael, "Why did you come here?"  As Patrick wrote, Connie becomes a powerful force to be dealt with. Connie, "Now they'll fear you. Michael." Michael, "Maybe they should fear YOU!"

Sophia is not lousy in her role but her storyline is.  Her relationship with Vincent is clearly wrong so we feel nothing for it.  It is essentially hollow screentime.  Her best moments are with Pacino as she is like Kay in the first movie; naive but loving.  How she learns just how dangerous Michael's life is, is very heart breaking.  It is the final turn of the key in Michaels solitary confinement.

The Godfather: Part III does in fact work great as an epilogue. 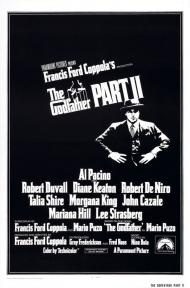