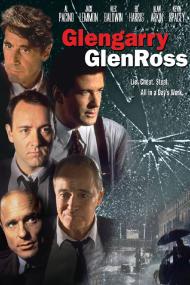 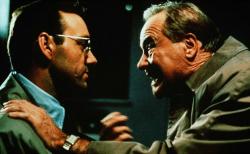 Movies are a visual art form, but often it is the dialogue that we remember most. Glengarry Glen Ross is all about language and dialogue. Conversations, as written by Pulitzer Prizing playwright, David Mamet, are as intricately choreographed as any dance or fight scene. In some movies, talking is what happens between action scenes. In this movie, talking is the action.

Adding weight to the dialogue heavy script are a power packed team of actors and I stress the maleness of the word actors. There's only one woman in the film and her character is credited as, "Coat Check Girl", which should tell you how much impact she has on the story. Al Pacino received top billing, but everyone in the small cast makes an impact, Jack Lemmon and Alec Baldwin in particular. Both of whom were robbed of nominations.

The story takes place over less than 24 hours, encompassing one night and the following morning, at a real estate office in New York City. The title comes from the name of two different properties referenced in the story. During the night, an aggressive salesman from the Head Office gives an "inspirational" speech to the sales force where he informs them that the winner of the monthly sales contest wins a car. Second place is a set of steak knives and third place is, "You're fired." The rest of the film is the reaction to this speech.

It's Alec Baldwin who delivers the speech that sets the events into motion and it's one of his most memorable performances. Mamet's dialogue is laced with profanities. Some version of the word "fuck" is used 138 times, which averages out to about once per minute. Here's a sample from Baldwin's famous, "Always be closing" rant, "You see pal, that's who I am, and you're nothing. Nice guy? I don't give a shit. Good father? Fuck you! Go home and play with your kids. You wanna work here - close! You think this is abuse? You think this is abuse, you cocksucker?" It's a short scene, but Baldwin sinks his teeth into the part and gets the audience's attention as much as he gets the salesmen's.

There's so much profanity in the script that reportedly the cast took to referring to the film as "Death of a Fucking Salesman". With that title in mind, it falls to Jack Lemmon to take on the Willy Loman like role. Lemmon plays the oldest of the salesmen. The one whose best days are behind him. There are no likeable characters in this story, but Lemmon brings such humanity to his part that you can't help but sympathize with him. How Pacino got nominated, but not Lemmon, I'll never know. Pacino does a fine job as Ricky Roma, the firm's best salesman, but Lemmon's performance is the work of an old pro bringing years of experience to a role.

Watching these talented actors fence with each other with the sharply written dialogue is this movie's greatest strength. Many of the best scenes happen during one-on-one conversations. Lemmon and Spacey's conversation in the rain is one example. Harris and Arkin discussing robbing the office is another great scene as they dance around the issue.

Although it wasn't financially successful upon its release, Glengarry Glen Ross has grown in stature since its release and deservedly so. It perfectly demonstrates the power of a finely written script spoken by a cast of incredibly talented actors. This is a movie meant for watching with your eyes and your ears.

Glengarry Glen Ross is a terrific movie thanks to the incredible cast and the juicy dialogue they get to deliver. The six top billed actors have all been Oscar nominated and four of them (Arkin, Lemmon, Spacey, Pacino) have won Academy Awards. David Mamet wrote them all such colorful and detailed verbiage, which the entire cast gleefully spews at each other. It is both a masterclass in acting as well as in sales technique (over the ensuing years this film has been frequently used as a training tool for new sales reps).

Amazingly the “Coffee's for closers” monologue, that my brother referred to, and that so brilliantly sets the tone of the movie, wasn't in the original play. In fact neither was the character Blake, played so memorably by Alec Baldwin. He was created by Mamet specifically for the screenplay. Not surprisingly many people find this script superior to the play. Baldwin has only this one scene but his presence hovers over the rest of the story like a storm cloud threatening to downpour at any moment.

I remember seeing this movie in 1992 and enjoying it quite a bit. Although, in my youthful superiority, I thought of these four salesmen as losers and found their lives quite depressing. Now, with a couple of decades more life experience under my belt, I came away with a greater sense of empathy for these middle-aged -and beyond- men. They are all flawed, but I disagree with Scott's assessment that none of them are likable. Are they the nicest people you'll ever meet? Absolutely not. But they are just four guys trying to earn a living like the rest of us. OK, so their job requires them to make suckers of people, but it is only the client's greed that ultimately reels them in.

Jack Lemmon gave his last truly great big screen performance as Shelley “The Machine” Levene. He shows so many facets of this guy. We see his anger and frustration at his current status at the company. He also shows us glimmers of the former hotshot salesman he used to be. Finally we see his desperation. He is a man clinging to a life raft who knows a big wave is about to sweep him overboard. For the record he deserved an Oscar for this utterly compelling late career turn.

Spacey as the clueless office manager, Arkin as the rather dimwitted, less experienced salesman, and Harris as the resentful, hothead all give good support. Their characters may be less fully developed script-wise but thanks to these talented actors we learn all we need to know about them.

One thing that hasn't changed since 1992 is my opinion of Ricky Roma. He is the least realistic character with the weakest dialogue. He is supposed to be the office big shot; the top man on the totem pole. Yet the meandering speech he gives to his client at the bar doesn't work. The sales pitches made over the phone by Shelley sound more convincing and clever to me. And Pacino doesn't seem completely comfortable in the part. He seems to rely on his hair a bit too much to convey the guy's obvious ego, but I never see beneath this veneer. In a movie featuring such finely tuned characters played to perfection by these actors, he alone seems a bit tone deaf to my ears. It isn't enough to mar this wonderful movie but I never fully buy what he's selling. But then again, maybe that's the point. 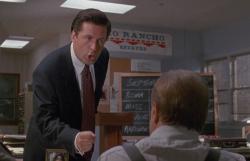 Like probably everyone, I have stress at my job. I have dreaded going into work because of the stress and I have literally punched my steering wheel when leaving work because of it. With that said, I had very little interest in seeing a film about a bunch of middle aged men stressing out at work.

Glengarry Glen Ross is not an inspiring film and there is no happy ending. It is however, an extremely well made film with, as my brothers wrote, some truly great performances. Each of the actors approached their part with such veracity that I felt that I had met these men in real life.

I also agree with Patrick that Jack Lemmon deserved an Oscar for his performance as Shelley. He goes from being on top to begging for his life. I did not so much like Shelley, but like Scott wrote, I felt for this guy more than anyone else on screen. He has a line that many people would probably like to say, some variation of, to their boss, “What the hell are you? You're a fucking secretary. Fuck you. That's my message to you. Fuck you and you can kiss my ass and if you don't like it baby I'm going across the street to Jerry Graff, period, fuck you.”

Shelley and the other men are trapped in a job they may not like on a daily basis but they certainly enjoy the high of a sale. Such as life, they have ups and downs. Being a salesman is a particularly hard job in that it depends on what someone else, whom they have no real control over, does.

I disagree with Patrick on the point that Spacey plays a clueless office manager. It is he who picks up on the mistake spoken by the person who robbed the office. The salesmen under him like to think of him as stupid because that makes them feel better but it is by no means the truth.

Glengarry Glen Ross is a depressing film that highlights the sad state so many middle aged men find themselves in. They have wives, children and far too much debt to even think about quitting a job they hate. This is a well-made film but it is ultimately a very sad one to watch.