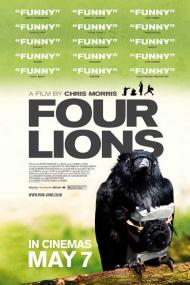 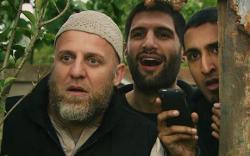 A comedy about Islamic terrorists seems like an oxymoron, but British writer/director Chris Morris has done exactly that and done it brilliantly.  Not only is this a comedy about a very sensitive subject, but it doesn't flinch away from any of it.  This is a dark satire that is also laugh out loud funny and bravo to Morris and team for having the balls and the sense of humor to take the concept all the way to the finish.

The plot centers on a group of Muslims living in Sheffield in the UK.  When the movie opens they're making a terrorist video of the type we're all too familiar with.  A Muslim holding a gun is sitting on the floor in front of a flag.  Only  in this case they get into an argument over whether the gun is too small and what exactly they should be saying in the video.  It quickly becomes obvious that these are terrorists, but they're also completely clueless.

Omar is the leader of the group and the "smartest".  He goes off on several rants against imperialism and capitalism, all the while enjoying a comfortable middle class and seemingly total Anglicized lifestyle.  He even argues several times with his religious brother about how ridiculous he thinks some of the Islamic teachings are.

It is Omar who has an Uncle in Pakistan who has serious terrorist connections and Omar and Waj, the dumbest member of the group, head off for terrorist training there.  They quickly fail out of Terrorist training camp after Waj tries to make a cell phone video of himself shooting a gun and sending it to his mates back home and Omar, in an attempt to get back in the terrorists' good graces, tries to down an American drone with a missile launcher with disastrous results.

Undetered, Omar decides that the group should do a mass suicide bombing during the London marathon, although one member of his group, a white convert, thinks that they should blow up a Mosque instead to stir up anger amongst other Muslims.  So the group, disguised in fancy dress costumes as if for a fun run head off to the city.

What's brilliant about this movie is that the leads are terrorists, but they're presented as so bumbling and even, yes, likable that you almost forget that what they're planning is to commit mass murder.  But believe me when I say that their cause isn't shown to be sympathetic, but rather it's shown to be completely idiotic and ultimately pointless.  And the fact that it's all done while being quite funny at the same time makes it even more amazing.

My brother Eric has often lamented that Hollywood is so afraid of offending Muslims that it shies away from the subject almost completely.  Well Eric, this is the movie for you.  Not only doesn't this movie hold back, but it does it with wit, intelligence and a wicked sense of humor that will cause both shock and laughter, often at the same time.  This is easily one of my favorite movies of the year. 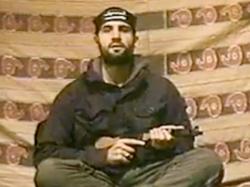 Waj is concerned with the size of his gun.

Four Lions has wit in spades.  There are the broad jokes, such as the car singing scene, or the misuse of the rocket launcher.  The best are the subtle jokes.  I like Omar's version of The Lion King.  The best joke is so subtle that I did not even think about it until after the movie.  Omar's wife knows he has a suicide bombing plan, and remains politely supportive.  Does she want him to die?

Although it has a tiny amount of Islamic discussion, It did not take some basic Islamic terrorism to task.  I wanted to see the scene where an older Muslim tells a younger Muslim to do a suicide mission for the glory of Allah and the virgins waiting for him, only to have the younger man ask, "If it is so great, why don't you do it?"

The four main characters are funny, but other than their goal, they are not very original.  They reminded me of the main characters in It's Always Sunny in Philadelphia.  If you know the television show, you can interchange all of the characters.   My favorite one is Waj.  He is the Mac character from It's Always Sunny.   I love the scene from the picture in Scott's review.  They just watched their friend Fessal (Charlie) get blown up.  Barry (Frank) and Omar (Dennis) look sad while Waj (Mac) is too dim to catch on.

The most unique aspect to this movie is that, as Scott wrote, Morris does not wimp out.   It almost changes directions, as the optimist in us all want it to.   I wondered greatly how he was going to end it.  I love this quote of Morris's, "If a terrorist organization wanted to knock out the moral compass of Britain, all they'd have to do is to kill 100 celebrities at random. The entire country would have an instant nervous breakdown."   I hope this guy makes some more films. 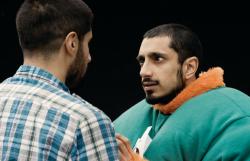 Four Lions is funny and shocking. Its subject matter is not what you expect to see in a comedy. It demonstrates the futility of terrorism and the senselessness of suicide bombers. The fact that it does so while making the audience laugh is no small feat.

Of the Four Lions Omar is the only one that is a fully fleshed-out character. The others are broad caricatures; the script is content to use them simply as the butt of jokes. The movie seems to be saying that the majority of jihadists are morons blindly following a more intelligent leader. Omar, the intelligent one in their cell, is also the only one that gets second thoughts at any point during the story.

Many of the jokes are hilarious. Here are my favorites…

In one scene Barry explains that the reason their car isn’t running properly is because “The parts are Jewish.” Omar asks him what parts in a car are Jewish. Barry responds, “Spark plugs! Jews invented spark plugs to control global traffic.”

Perhaps the funniest moment though is Waj taking a picture of himself with his cell phone camera in order to ascertain whether or not he is confused. “I'm not confused brother! I just took picture of my face, and it's deffo not my confused face.”

As Eric noted some of the humor is a bit more subtle and thought provoking. There is a scene where the guys are dressed up in funny and uncomfortable looking costumes for the marathon. Underneath they’re each wearing a bomb. A police Inspector innocently tells them, “You're gonna die in that gear lads.” Omar chillingly replies, “More than likely, but it's for a good cause.”

Kudos to Christopher Morris and his talented group of actors for having the balls to make this dark comedy that tackles such a taboo subject with gusto and cleverness.