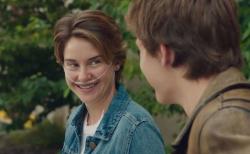 Shailene Woodley and Ansel Elgort in The Fault in our Stars.

Making an audience cry when your movie is about a teenage girl with cancer finding first love with a teenage boy with cancer, is like shooting fish in a barrel. However, it's also very easy to become a schmaltzy Lifetime movie of the week with such a plot. The Fault in Our Stars manages to mostly avoid the problem, but when it does become schmaltzy, as it increasingly does as it progresses, it doesn't hold back. It's the central performance by Shailene Woodley, whose career is beginning to seriously heat up, that really holds everything together and makes the plot's biggest sins a bit more forgivable.

Although it opens with a voice-over narration by Shailene as Hazel saying how real life cancer isn't like a movie, the plot plays out very much exactly like a movie. Hazel is a teenager whose cancer is currently in remission, but only because of an experimental medicine. Her lungs are permanently damaged and she is constantly on oxygen. At a support group she is forced into going to by her mom, she meets Gus (played by Ansel Elgort who recently starred in Divergent also with Shailene), a cancer survivor who lost a leg to the disease. They strike up a friendship that gradually leads to love. However, given the nature of the story and the fact that these are two young lovers with the potential of dying of cancer, you just know that it will end tragically and with the audience reaching for their tissues.

The story of these two lovers is touching and heartfelt. It's even often quite humorous. When the tears come, and they do come, they come as sincerely as they do because Shailene Woodley has made Hazel such a real person. Ansel does an okay job as Gus, but he never feels as fully developed as Hazel. During its opening weekend, exit polls showed that the audiences were 82% female and it seems the filmmakers were guessing it would be so. The male characters are all there to support Hazel. Although to be fair, even the only other main female character, Hazel's mom, played by an under-used Laura Dern, is strictly there to react to her daughter.

Some of the film's biggest problems come late in the story. There's a spontaneous kissing scene that results in applause by those watching that is truly groan inducing. And while I'm sure living with a terminal disease gives you a deeper perspective on life, you don't necessarily assume that teenagers will be able to articulate that perspective as well as these two. They are able to express their love for each other in terms that are quite beautiful and eloquent, but in no way that you would ever hear in real life. It's a highly romanticized style that goes against the grain of those opening statements that imply this story won't be like a movie.

As I mentioned, the supporting characters are never fully developed. Hazel's parents are given particular short shrift. They are played very generically and with bland sweetness. There's one scene near the end that tries to give them a touch of depth, but they only exist in the plot via their relationship with Hazel. And Gus's parents are even flatter. Even Gus's life revolves around his girlfriend. Willem Dafoe, who plays Hazel's favorite author, is a bit of a contradiction and feels more like a plot point than a person.

How much you enjoy this movie will depend upon your tolerance of emotional manipulation. I'm honest enough to admit that I got a bit misty-eyed by the film's conclusion, but I also groaned a few times. One thing that is certain however, is that Shailene Woodley's career advancement seems to be inevitable. She has that girl next door charm going for her and the ability to generate empathy from her audience.

Shailene Woodley and Ansel Elgort in The Fault in Our Stars

As my wife and I waited for the audience for the earlier showing to exit the theater, we noticed two things. The first was that the audience was at least 82% female and the second was that several of them were carrying boxes of facial tissue. I guessed they assumed this was a multi tissue tearjerker, and they were correct.

I am not sure why Scott felt the kissing scene in the Anne Frank House was groan inducing? Hazel had just climbed three flights with her weak lungs and oxygen tank. She would not have been there at all had it not been for Gus. She felt proud of herself and moved by the whole moment. Their kiss was a release of emotions she could no longer keep to herself. Even though it was hard on her, that climb made her feel alive. This leads to the young couple making love for the one and only time in their lives.

Shailene Woodley does portray Hazel as a real person but she is pretty much written as flawless. She never does anything remotely wrong, let alone impolite without due cause. Both she and Gus are pretty much saints. Even when they encourage a friend to throw eggs at a car, we never hold it against them as the owner of the car did him wrong.

Scott dismissing Laura Dern’s performance as simply reacting to her daughter misses the point as her reactions to her daughter are the meat of her performance. Dern is playing Frannie, a woman who is pretending to put on a brave face in nearly every scene. Frannie lives a life on egg shells. Every line Dern delivers is calculated as she is careful to not use words that may reveal her fears to Hazel. Note the scene where Hazel screams in delight, but her mother comes running as if Hazel’s life was at risk. I found Dern’s performance to be wonderfully sincere.

Although Shailene Woodley dominates the film, Ansel Elgort has his moments. His best is when Hazel finds him having a meltdown in his car and he can no longer mask his illness. Gus is written as a sort of prince charming with cancer. The one moment he seemed real was when he and Hazel were about to have sex and he starts to describe his leg stump to her, revealing that he is insecure about it.

Hazel and Gus are two very likable people whom we know going in will have to deal with death. However, for a film about death, there is some joy to be found here as it reminds us that life, no matter how long, is about the journey and not the destination. Although their lives may be abbreviated, Hazel and Gus lived and loved, and that love distracted them from their problems and made their lives worth living. 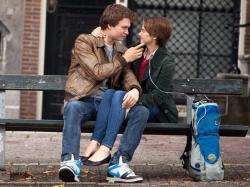 Ansel Elgort and Shailene Woodley in The Fault in Our Stars.

The Fault in Our Stars is a very well written and acted movie that mines humor from tragedy. Unlike my brothers I found both Hazel and Gus to be fully rounded, authentic human beings. People do get cancer and they do die young. Scott mentioned how easy it is for a movie with this subject matter to be emotionally manipulative. The Fault in Our Stars avoids that problem. It brings tears the honest way without exploitation. Unless of course you find the mere presence of a cancer patient in a movie to be manipulative. There are no teary death bed scenes or endless mourning montages where the survivor walks around visiting all the places they went with the deceased while some schmaltzy music plays.

I'm with Eric as far as the spontaneous applause after Hazel and Gus kiss at the Anne Frank House (actually a reproduction since the producers were denied permission to film at the real place). It was a celebration of romance, as well as Hazel's personal triumph of making it all the way up to the attic. There was nothing groan inducing about it. I likewise had no problem with the way Laura Dern's character was written. We see her mostly from Hazel's point of view. I also disagree with Scott about Ansel Elgort. His performance matches Shailene Woodley's perfectly. Together they've created a cinematic love story for the ages.

The beauty of their relationship is that Gus gives Hazel hope and she gives him the gift of accepting his physical affliction. His eternal optimism is the right tonic for her self pity, which, at the beginning of the movie she wallows in. That's her personality flaw. Gus keeps his doubts and fears hidden behind a carefully constructed wall of jokes and constant activity. Hazel blossoms under his unconditional love. When she finally lets her guard down and allows herself to love him just as much, there is no going back. Their fates are forever entwined. When they make love they have the most poignant sex I've ever seen in a film. Hazel gives the gift of her body to her eighteen year old virgin boyfriend and together they carve out their own little infinity.

You won't soon forget Hazel and Gus. Eric is right, it isn't how long you live it's how you spend your time while you are here. Hazel and Gus cram in a lot of living in their short lives. This isn't a movie about two teenagers dying of cancer. It's a movie about two teenagers falling in love, who also happen to have cancer. The Fault in Our Stars is a funny and touching celebration of life.

Oh, and the audiences for this movie may be mostly female but it was based on the bestselling novel by John Green. That's right, it was written by a man, as was the screenplay which was adapted by Scott Neustadter and Michael H. Weber.