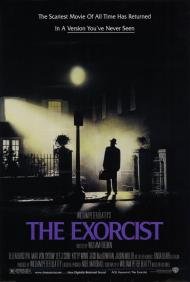 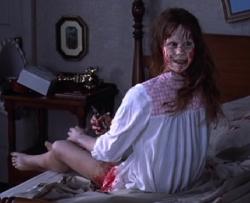 Linda Blair in The Exorcist.

I remember seeing The Exorcist as a child, but was so young that only the most famous scenes stand out in my mind. The head spinning around, the projectile vomiting, peeing on the carpet, the creative use of a crucifix, but most of all the ending. Those images were stamped onto my mind, and became a part of the national consciousness as part of an extremely popular and classic film.

For those of you who missed it or weren't born the first time around, the movie tells the story of the young daughter of an actress who becomes possessed by the devil and wrecks havoc on the lives of those around her. Her mother, after exhausting modern medicine, turns to the Catholic Church, in the hopes that an exorcism will save her daughter.

This movie works for many reasons, but mainly I think because it creates a mood, and an atmosphere that starts from the opening shot and slowly builds and adds to itself right up until the final shot. Any one who goes to see this movie expecting the usual horror, hack 'em slash 'em, kill the half naked coed film, will be sorely disappointed. Of the three deaths in this film, only one of them is on screen. This is a thinking person's horror film that raises questions of faith and right or wrong, science versus religion. It's higher on the creepy scale than on the sudden jolt meter.

A very interesting aspect of watching this film today, is observing the change in attitudes from just 27 years ago. Due to the change in the amount of profanity in films today, hearing a 12 year old girl saying 'fuck', caused laughter in the audience I viewed the film with, rather than the shock it probably generated upon it's initial release. Another scene which caused unintended chuckles today, was the doctor lighting up a cigarette in the hospital, right after examining Linda Blair's character.

The character that stands out in my mind, and has always intrigued me the most, both then and now, is that of the young Priest, Damion Karras. His struggle with his own guilt over his mother's death and his questioning of faith, right up until the film's climatic moments, is to me, the heart of this tense movie.

So whether you're seeing it for the first time, or the twenty-seventh time, go and see The Exorcist on the big screen. I didn't remember the movie well enough to know which scenes weren't in the original that they've added to this new release, and it doesn't matter. All the scenes are classic. 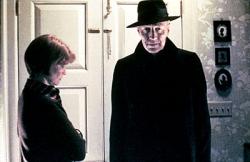 Ellen Burstyn and Max von Sydow in The Exorcist.

Like Scott, I had a childhood memory of seeing The Exorcist and being very frightened by it. I have, however seen the movie at least three times in the past ten years. It is, along with the original Texas Chainsaw Massacre, still one of the most intensely scary films ever. Needless to say I was excited at the chance to see it on the big screen for the first time and to learn that it would have added footage that had been cut from the original release.

This movie would never get made today. Horror films have been dumbed-down in recent years. They must be about shock and adrenaline and are aimed at the teenage market. This is definitely an adult movie. It is paced very leisurely by today's standards and has quite a bit of dialogue. Director William Friedkin sets the tone early as Scott has mentioned but then he takes his time letting the story unravel and build. By the time Regan is spewing pea soup all over the priest we have had time to get to know the characters as real people. And, more importantly, the way they react to the unbelievable situation at hand is completely real. Ellen Burstyn's behavior is exactly as one would behave; the parade of doctors, shrinks and other specialists is likewise believable. At no time does the movie come across as over the top.

So by all means go see The Exorcist. A movie that taps into our deepest fears of evil incarnate and never drops the ball on the suspension of disbelief. 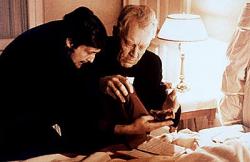 Jason Miller and Max von Sydow in The Exorcist.

So much has been made of this movie. It has long been put upon a pedestal of ground breaking greatness. It is considered a genre classic. It nearly put me to sleep.

The Exorcist is not, I repeat, not a horror film. It is a "shock" film. Patrick wrote in his Bonny And Clyde review that it broke ground in the area of violence and that Who's Afraid Of Virginia Wolf did the same for language. The Exorcist broke ground in shock value. It will be forever remembered for its scenes of the possessed Regan spouting off lines of vulgarity and spitting up pea soup.

Even though this movie is 30 years old it still can shock. Today's movies stop at nothing when it comes to rated R material. Even intellectual Oscar winning movies have shocking adult scenes. Remember all the sex in Monsters Ball, or the close up of the murdered son's head in In The Bedroom?

The one thing The Exorcist did, and I cannot think of any movie that has since done it, is have an under aged actor do such adult scenes. Having an under aged actress pretend to repeatedly ram a cross into her bleeding vagina as she yells "fuck me" is pornographic. I could just see Linda Blair's parents sitting in the theatre at the premiere watching their daughter shove her on screen mother's, Ellen Burnstyn, face into her bloody crotch yelling "lick me." I bet they were bursting with pride!

This movie has these scenes of shock. Yes, due to the actresses age, I was some what shocked. The movie also has too many scenes where nothing happens. The whole opening sequence where perhaps the Priest some how released the demon is uneventful. The scenes where the younger priest is dealing with his guilt. Blah, blah, blah, so he feels guilty and the demon uses it briefly to piss him off. We did not need at least a half hour of character development and background when the pay off for it was so very small.

Much has been made of Linda Blair's performance in this film. I think it sucks. Look at the scenes where she really has to act. In the scenes where she is not possessed she is a blank wall. There is no character being portrayed until she is possessed. In those scenes she is effective but it is probably more due to direction, special effects and her dubbed voice.

Movies have long been falling over each other to show more gore and violence. However, they never have children as victims. In all of the Halloween movies we see a slew of kids running around the neighborhood. The killer's victims though are always adult teens. I do not see The Exorcist as a great movie. I see it as a foot note in cinema history. A film that introduced the movie audience to some shocking scenes of a child being tortured.

There are a plethora of scenes of the mom trying to find out what her daughter's problem is. There is this plot about the priest questioning his faith. The only thing people remember from this movie are the vulgar scenes of Regan's possession. In my opinion that is all there is in this movie worth remembering, and I hope I don't remember them.