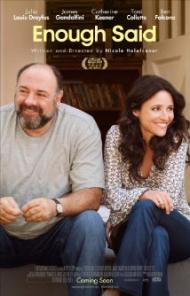 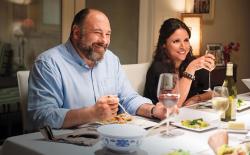 Written and directed by Nicole Holofcener (Friends with Money), Enough Said is a nice little romantic comedy aimed at grown-ups. It's a gentle comedy about two 50-somethings falling in love while individually dealing with the impending departure of their daughters, who are off to college. It is only marred by a central plot device that feels as though it would be more at home in a sitcom than a theatrical movie.

Julia Louis-Dreyfus stars as Eva, a divorced masseuse with a daughter graduating from high school. At a party she meets Albert, played by James Gandolfini in one of his final performances before his death. Albert is likewise divorced and also has a daughter about to leave for college. From just a small spark between them when they both joke that there is not a single person at the party that they find attractive, a relationship begins. It's not a grand passion, filled with the drama that youth brings to everything, but is more relaxed and comfortable, with both sides warily approaching it, probing it gingerly with the experience that age brings.

The silly element of the plot is introduced when Eva takes on Marianne as a new client who coincidentally turns out to be Albert's ex-wife. Eva becomes Marianne's confidant and as they discuss relationships Marianne tells Eva all about her ex-husband and the reasons they divorced, which includes a long list of his bad habits. Eva, who until this point has at least seemed somewhat sensible, decides to not mention to either Albert or Marianne that she knows the other. This allows for a reveal at the end of the film that causes drama, but it feels forced, as if a reason was needed for some conflict in the third act.

Although not a laugh-out-loud comedy, there is plenty of humor. Dreyfus still has the comedic timing she perfected over the years on television. She also manages, for the most part, to escape from the shadow of Elaine Benes, her long-running character on Seinfeld. Some of the comedy is provided by Toni Collette and Ben Falcone who play a bickering married couple who are two of Eva's best friends. Collette's ongoing struggle to fire her maid is worth a chuckle or two.

Gandolfini plays a gentle bear of a man in sharp contrast to his most famous role. His character of Albert isn't as clearly defined as Eva and his is definitely the supporting part. He and Dreyfus do share a nice chemistry, both comic and romantic, although this isn't a passion for the ages.

Eva's relationship with her daughter and her daughter's best friend also provides some heart to the story. Eva saying goodbye to her at the airport prompted plenty of sniffling from the rather aged audience with whom I watched it.

Enough Said isn't a perfect movie, but with so many movies aimed at teenagers, it's nice to see one aimed at grown-ups that doesn't feature explosions, super-powers or even a trace of CGI.

Enough Said is a love story for empty nesters. It is an interesting contrast to a film such as Before Sunrise, in which a young couple meets and spontaneously spends the night together. Here we have a 50 something couple that is far more practical and whose busy lives do not allow for such grand romantic gestures.

What I truly liked best about this love story is that neither Eva nor Albert put on airs for the other. On their second date, Eva rubs her itchy feet in front of him while he wears pajamas during breakfast at his house. It leads to Dreyfus having the line, “I can see your penis.” The first time they have sex is not inspired from a passionate romantic moment, but after a congenial conversation about their exes and how little they had sex with each other.

The humor is subtle and I agree with Scott that Dreyfus is brilliant. One of the very first scenes is simply Dreyfus carrying her massage table up some stairs to a client’s apartment who does not make the slightest effort to help her. The look on Dreyfus’s face is very subtle yet you completely understand what she is thinking.

I liked the film slightly less as it went on. It begins with a mature, lightly comedic look at finding love later in life, but it slowly slips into sitcom situations. Coincidences, talking in the movie theater, discussing sex, an ornery maid are all television comedy staples.

Through her conversations with the ex-wife, Eva starts to look for flaws in Albert. With this inside information, this older and wiser woman starts to over analyze Albert. Where she was practical and adoring, she becomes a bit critical. This leads to their first conflict.

I admired this film’s frankness and maturity on love over 40 but it was a bit inconsistent. The reveal scene was too staged with Eva suddenly turning into a shy high school girl. Why did she not just confess all in front of them like an adult who has long since outgrown such gossipy type drama?

This light romantic dramedy’s best asset is its practical take on a mature love affair, yet when the film hit an emotional climax, the maturity level suddenly dropped. I still, however, found this to be a mostly satisfying film, even if it is not completely consistent.

Until now I was unaware of the name Nicole Holofcener. If Enough Said is any indication, she's a talent to be reckoned with. As a child she received a wonderful movie education. Her stepfather produced Woody Allen movies and she spent many days on the sets, even playing an extra in Take the Money and Run and Sleeper. Her first real job in the industry was as a production assistant on Allen's 1982 release A Midsummer Night's Sex Comedy. By the time of Hannah and Her Sisters in 1986 (in which Julia Louis-Dreyfus had a small role) Nicole had been promoted to apprentice editor. Enough Said marks her fifth feature film as writer/director. Holofcener has crafted a wonderful movie about finding love later in life. It's a romantic comedy that's as pragmatic as it is wistful.

The performances are equally terrific. Julia Louis-Dreyfus and James Gandolfini go together like mashed potatoes and gravy. As Eric said, she is an actress capable of conveying so much without uttering a word. Sans makeup and looking far frumpier than Elaine, she creates a fully rounded woman. Gandolfini makes Albert a real person too, even though, as Scott pointed out, he is less clearly defined by the script. He is seen mostly through the prism of the female characters. Together these two television giants from the recent past make one of the most credible movie couples I've seen in a long time. I was fully invested in their happiness.

I see my brothers' point about the sitcomish element to the central plot device. Actually it is more like a classic screwball comedy plot device. I thought it was handled quite realistically though, all things considered. The fact that she met them both at the same party is fairly likely. And the fact that she connects the dots early on makes it all seem more plausible. I also disagree with Eric about her behavior during the big reveal. She's mortified and her reaction seems instinctive and 100 percent natural. Being a grownup doesn't mean always behaving in a mature fashion. Especially when caught in as embarrassing a predicament as Eva is in this scene. It matters not that the humiliation is completely of her own making.

Relationships between parents and their young adult children is also a theme here. Like their daughters who are about to leave home for college, these soon-to-be empty nesters are at a crossroads in their lives. As parents watch their offspring transition into adults they often have to step back and allow their son or daughter to make a few mistakes along the way, while at the same time finding new ways to fill their own days. The script of Enough Said captures this period of adjustment with aplomb. It maintains a swell balance between humor and heart, while remaining much truer to life than most romcoms ever manage to be.

I may not have heard of Nicole Holofcener before watching Enough Said, but I'll remember her from now on.