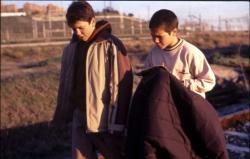 You could possibly dismiss El Bola for one of those old after school specials that used to be shown on network television.   They always dealt with some serious youth issues and were shown in the afternoon, hence their title.  However, that would be selling this Spanish movie very short.

El Bola follows the friendship of two middle class, pre high school boys.  Pablo lives with his parents and ailing grandmother.  His father has a small hardware shop.  On the surface all seems quite normal and average with him.  Alfredo is the new kid in school whom Pablo befriends.  At first he seems a bit like trouble.  He keeps to himself and smokes cigarettes on the playground.  Alfredo thinks nothing of skipping school.

The big difference between the two boys is their relationship with their fathers.  Alfredo's dad is a tattoo artist.  He lets little things slide when he knows Alfredo has done things wrong.  When he visits his father at the studio his father merely rolls his eyes when he learns that Alfredo has not in fact told his mother he was going there.  His father has a friend sucumbing to AIDS that he visits in the hospital, while other friends do not.

Pablo's father is the opposite.  He is abusive.  He beats Pablo often.  After staying out late, Pablo gets such a beating that he misses a week of school.  Pablo's father seems incapable of compassion.  We discover that Pablo had an older brother who died before Pablo was even born.   Details of his death are never given, but a death of someone's child has had to have created stress like no other.

The story comes down to Pablo being in the middle of these two families.  He has only known the abuse of his father, until he is introduced to Alfredo's family, who spends time together having fun.  No one in Pablo's family ever smiles, while Alfredo's family is more carefree.

The film comes to a head after Pablo gets a particularly harsh beating from his father.  It eventually leads to the most tense scene in the film where both father's find themselves in the same car, searching for Pablo.  We also find that Alfredo's dad, although clearly a decent person, has a breaking point as well, that he regrets reaching.

Achero Manas won a pile of European awards for directing and co-writing this film's realistic approach to family life.  Juan Jose Ballesta as Pablo, earned some newcomer awards for his performance and has since gone on to a very successful acting career in movies and on Spanish television.  Through his performance here we see Pablo go from a quiet, defensive child, to discovering laughter with Alfredo and the possible option of a better life.

Those after school specials were never as engaging as this.