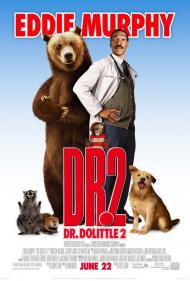 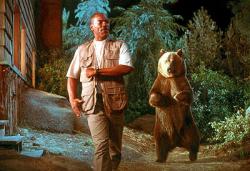 The age old movie dictum to never work with kids or animals is completely lost on Eddie Murphy again in Dr. Dolittle 2 as it was when he made the original a few years ago. In these movies he seems perfectly content to play the straight man to the real stars of the film, those computer enhanced talking animals. They get all the best lines and all of the best jokes, leaving him to react and feed them their setup lines. To Murphy's credit, he manages to do it quite well and believably and without ever getting lost in the background.

The plot this time around is Dr. Dolittle against a lumber company who wants to tear down an entire forest, thus leaving thousands of woodland creatures homeless. The good doctor's aid is enlisted by an animal mafia chieftain; The Beaver. With his wife's legal advice, Dr. Dolittle discovers that if their were a species of endangered animals living in the forest, it would be protected. So he tries to implant a circus trained Pacific Northwest Brown Bear into the forest so that it will mate with the one female of the same species that is still living there. It then becomes a race between Dolittle and the lumber company to see if he can play matchmaker before the date the tree cutters are set to roll.

The jokes are all cute and the movie is a family friendly PG. In fact, that is really as far as this movie ever goes. It's cute rather than butt-gusting, but entertainingly so. And the underlying message of family togetherness as Dolittle attempts to bond with his teenage daughter is handled well without ever being cloying. This was definitely intended as safe, amusing, family entertainment, and at that level it seems to succeed.

Of the animals, Lucky the Dog returns, although Chris Rock's guinea pig seems to have died or been sold, as he is never mentioned. Of the new animals, Steve Zahn as the show biz bear is the funniest. His attempts to woo Eva (Lisa Kudrow) are the funniest. Although the mafia setup is quite funny as well.

I did find it ironic however that another of the movies themes was mankind exploiting nature for it's own ends in the form of the lumber company. My only question is this; who's the bigger exploiter, the lumber company, or the people who made this movie? 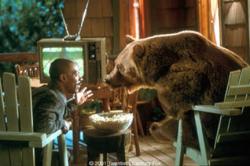 As Scott has written, the animals in Dr. Dolittle 2 get all the good lines. My kids and I laughed heartily through the entire movie. The idea that animals might actually think these things had us very well entertained.

Now where as this movie is a good piece of family entertainment, it is also a big, stinking, piece of liberal crap! Let's start with the mom. Dr. Dolittle asks his career minded, lawyer wife who their daughter is going out with on her 16th birthday. To which the uncaring mother responds 'I don't know. She's a big girl now.' If she was a caring mom don't you think she would want to know? When Dr Dolittle asks his wife who all the phone numbers on their spoiled daughter's cell phone belongs to, the wife/mother gives another vague response of I don't know or care.

Now, how about the whole big theme of the movie, saving those animals. On one side we have a bunch of wild life. If bored animal rights groups, that care more about animals than their own species, didn't constantly remind us of them they would really serve no purpose to most of the population of this country. On the other side we have the big powerful logging industry, led by a republican. Yes, I know the movie does not come out and say it, but there is a line where the CEO of the logging company says in a Snidely Whiplash grin 'I took on the Democrats I can take on them.'

Oh yes, I forgot liberal, bleeding heart Hollywood made this movie. Environmentalist whackos are always in the right and big business conservatism is always in the wrong. So according to Hollywood a poor economy and unemployment is acceptable if it means saving a bear.

On the basis of entertainment alone this is a 2.5 star movie. You can guess how I would rate it if I were to consider its simple minded politics.

I'm not going to get into the politics of this movie's environmental message except to say that I think it's very shortsighted to want to destroy forests, and the wildlife that lives there, just to provide a few jobs that will end as soon as the trees are cut down. Six months later you have no forest, no wildlife and no jobs. I wouldn't call that progress.

As for this movie, I too found it mildly amusing but clearly its target audience is children. There are a few references to sex and reproduction but this movie stays family friendly throughout. As my brothers said the animals get all the good lines while Eddie Murphy is stuck playing straight man.

When he first meets the female bear Ava Dr. Dolittle asks her, “How would you like to meet the man of your dreams?” She replies, “You're real cute but I don't go inter-species.” Dr. Dolittle explains to city bear Archie that wild bears curl up in a cave and sleep for six months each winter. He tells him it's called hibernation to which Archie quips, “It sounds like depression.” In one scene a raven says, “Nevermore.” before flying away.

Those are some of the more sophisticated jokes this movie has to offer. Many of the others concern bodily functions. For example Dr. Dolittle gets stuck in a bathroom while a bear takes a crap on the toilet. Or after running, Archie gets a cramp and begs the doctor to, “Rub my butt.” If I was 9 I would find that hilarious.

Dr. Dolittle was originally created by author Hugh Lofting in illustrated letters he wrote to children from the trenches during WWI. The Story of Doctor Dolittle was published in 1920. Lofting would continue writing Dr. Dolittle books until his death in 1947. Other than the name and the gift of being able to communicate with animals this movie has nothing in common with Lofting's creation.

The character Dr. Dolittle has appeared in many different forms over the decades. There was a 1928 silent animated short, a 1933-34 NBC radio series and, perhaps most famously, a big-budget 1967 musical starring Rex Harrison. Eddie Murphy took on the role in 1998's Dr. Dolittle. After the success of that movie and this one Murphy stopped playing the role. Since then 3 additional direct-to-DVD sequels appeared in 2006, 2008, and 2009 starring Kyla Pratt as Dolittle's daughter Maya, who shares her father's gift of being able to talk to the animals. The late Crocodile Hunter, Steve Irwin makes a cameo.