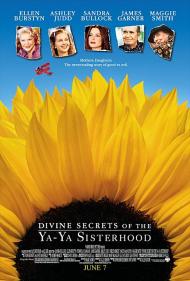 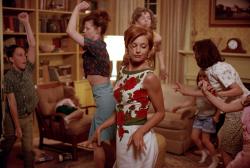 Ashley Judd in The Divine Secrets of the Ya-Ya Sisterhood.

Ok, my main problem with The Divine Secrets of the Ya Ya Sisterhood, besides that fact that I don't have a uterus, is that it is so unevenly split between a comedy and a drama and both are only mediocre at best.

Sandra Bullock plays Sidda, a successful playwright living in New York with her Scottish fiancée.  She gives an interview to Time Magazine in which she depicts her mother and childhood in an unpleasant light.  Her mother Vivi, played by Ellen Burstyn, takes the article personally and a volley of nasty letters and phone calls between the two of them is the result.

Vivi's close group of friends (the Ya Ya Sisterhood) kidnap Sidda, and bring her back to Louisiana to teach her about her mother's past in the hopes that they can be reconciled.  The rest of the movie is split between flashbacks and the events going on in the modern day.

And here is where the movie also splits between comedy and drama.  The modern day tries to be light and funny with lots of hard drinking old Southern gals shootin' the shit and passing on pearls of wisdom.  In the past we have the dramatic story of Vivi as a young woman played by the always beautiful Ashley Judd.  It becomes very difficult to see that the young Vivi and the old Vivi are the same woman since they don't seem to be in the same movie.

There are some truly great actresses in this movie, but nearly all of them are wasted playing caricatures.  The only one of them who really fits in the part is Ashley Judd.  As the young Vivi she plays a troubled and disturbed woman from a dysfunctional family who loses her one true love along with the chance to have the life she's dreamed of having.  She is left instead with the claustrophobic life of wife and mother on a farm in the south.  She has many great moments to show off her range, going from belle of the ball to a mentally disturbed woman abusing her children.  Of the male actors in the movie, James Garner and Angus MacFadyen, they are merely there to stand around and make small talk.

The message of this movie is clear and painfully simply told, your parents are people and you must try to understand them before you judge them.  Well I understood this movie and my judgment is that I didn't enjoy it.  Of course, back to not having a uterus, my fiancée and I saw this movie together and she loved it.  Maybe you have to be a daughter to enjoy it, or at least it helps. 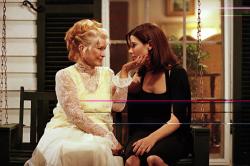 Ellen Burstyn and Sandra Bullock in The Divine Secrets of the Ya-Ya Sisterhood.

Next to; To Wong Foo, Thanks For Everything, Julie Newmar, Divine Secrets Of The Ya Ya Sisterhood isn't such a bad name. Compared to absolutely every other movie name ever made it is the lousiest movie title. Okay, just had to get that out.

In my own life I have seen several mother/daughter relationships up close. I find them to be very fascinating. Fascinating because they boggle the hell out of me. Some of these mother/grown daughter relationships are the closest yet most destructive arrangements I have ever witnessed. Divine Secrets Of The ..... is a wonderfully filmed example of this.

Sandra Bullock plays a daughter of an abusive mother, Ellen Burnstyn. She is scared to commit to her boyfriend out of fear she will turn into her mother. The mother and daughter get into a heated distant argument and the mother's life long friends step in to help resolve it. They tell the daughter stories about her mother. A lot of old dirt is dished up. She learns that her mom had a fiancee before her dad. She learns that her mom was on prescription drugs for a while. The movie does not come out and say it, but it is played like her mom was a manic depressant.

By the end of the movie the two are of course friends again. I do not know what was supposed to be resolved by these stories. The mom was and is a drunk. She did in fact briefly leave her family. Okay, so she married her second choice, but she didn't have to. She was abusive, even though the movie tries to blame it on medication. To me the one and only informative advice anyone gives in this movie is when the long suffering father, James Garner, tells his daughter to just try to remember the good times she had with her mother. It is only after she recalls a day her mom went out of her way to make her happy does she step up to be friends again.

So, I watched this movie hoping for some insight into the odd relationship between mothers and their grown daughters. I sadly did not get any. This movie is a very good example of their relationships, but it doesn't explain the odd nature of it. Men and their relationship with their dad is simple. We either have one or we don't. There is none of this middle ground that woman have. Woman can love there mothers dearly, yet at the same time no one can bug them more. I don't get it and unfortunately the only thing that seemed to make any sense in this movie was the one simple piece of masculine advice. There are some great performances in this movie. I particularly liked Ashley Judd.

This is a good chick flick that I bet a lot of woman could relate to. I unfortunately was flabbergasted by the whole thing. 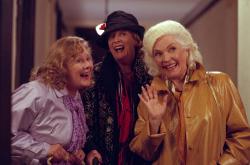 Shirley Knight, Maggie Smith and Fionnula Flanagan in The Divine Secrets of the Ya Ya Sisterhood.

Divine Secrets of the Ya-Ya Sisterhood is the biggest display of estrogen since Fried Green Tomatoes. By the way, why are women's movies so often set in the south? Crimes of the Heart and Steel Magnolias are two other examples of what I like to call Dixie-Chick-Flicks. Of the above four movies, however, Ya-Ya Sisterhood is the weakest. It does have some charm and originality, but it is a bit uneven, as my brothers have already stated.

I disagree with Scott about the actors. I think they all do well with the material at hand. Maggie Smith and Shirley Knight are especially good and I have yet to see Ellen Burstyn give a bad performance in anything. As for Sandra Bullock, she is a fairly competent actress with some on-screen charisma, but she'll always be the poor man's Julia Roberts. This movie doesn't give her much to do either, except react to the stories and flashbacks going on constantly around her. Personally, I find Ashley Judd to be a bit stiff and unnatural. You can always tell she is acting although I agree with my brothers that she is beautiful.

From where I sit, Scott has never met his feminine side and Eric is actively avoiding his - straight men are so simple. As a gay man I have the ability to understand both sexes. It makes perfect sense after all. To understand men you need only understand their sex drives, since their entire ego and self worth is tied up in that. To understand women you need to be in touch with your emotions in a way that 90% of straight men aren't. I see hope for Scott. He at least understood the point of the movie. Eric, on the other hand, doesn't seem to be able to grasp an understanding of the dynamics of mother/daughter relationships at all. Basically what he wrote about father/son relationships is that they either get along or else they just stop communicating with each other. Apparently actually dealing with emotional issues would be too difficult for them. Women (and gay men) understand that the line between love and hate is very thin. Also we both can appreciate a good cry.

Divine Secrets of the Ya-Ya Sisterhood, while not a great movie, does have a great cast. This fact alone makes it worth watching. Also if you are a straight man trying to fathom the depths of women's emotions this is a good place to start. On second thought, maybe it's not such a good idea for heterosexual men to get in touch with their feelings. If they did what would women and gay men have to talk about?