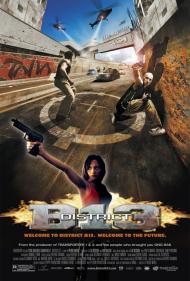 David Belle and Cyril Raffaelli in District B13

French film making team Luc Besson and Pierre Morel, (Taken, Transporter)  had a hit in France with District B13 in 2004.  It made plenty of money in Europe and inspired a sequel, but never found a large audience in The United States.

It takes place in an imagined Paris of the near future, where a crime ridden neighborhood, District B13, has been walled off from the rest of the city.  To leave or enter you must go through a check point.  A gang runs the place, selling drugs and enforcing their rules with gun toting members.

Leito was born and raised there, and fights crime in his own way.  The movie opens with some men chasing after him as he just destroyed a large shipment of their cocaine.  It is the movie's most famous scene.  Former soldier, gymnast, martial artist, stuntman (Prince of Persia) David Belle runs through hallways, stairwells and over buildings, fighting off and avoiding his pursuers.  It is an impressive scene, but it does not go well for him,  His sister ends up abducted and he goes to jail.

Meanwhile, Damien is the best cop on the force.  He is Leito's physical equal.  We are introduced to martial artist and stuntman Cyril Raffaelli, as he fights his way out of a rough situation in another over-the-top action sequence.   After a bomb is stolen and taken to District B13, Damien is instructed to team with Leito to go into District B13, diffuse the bomb and rescue Leito's sister.    Plenty of action ensues as the two battle countless goons.

As is their tradition, Besson and Morel waste little time with plot exposition.  They quickly put you into the action, and it rarely lets up.  This makes for a great pace, but we we learn very little about these characters.  It runs a mere 84 minutes.

Belle and Raffaelli are the best things about this movie.  Being such physical men in real life, they do their own stunts and it pays off.   These are some of the best fight scenes to be found, even if they are not exactly realistic.

David Belle demonstrates his Parkour skills in District B13.

Although District B13 never saw a wide release in the US, there is an American remake in the works. It's set for a 2014 release with David Belle reprising his role from the French version, but with American Paul Walker taking over the part of  police Captain Damien Tomaso from Cyril Raffaelli.  I was unaware of this remake when watching the original, but during it I couldn't help but wonder if an American studio would pick it up since its minimal plot and unique action make it the perfect candidate for a Hollywood action movie treatment.

It is definitely the action that is this film's strongest point. Not just the fight scenes, but also the chases. These scenes employ the training discipline known as Parkour, which the film's star David Belle invented. The discipline was developed from military obstacle training, which David was taught by his father. Wikipedia describes it thusly, "Practitioners aim to quickly and efficiently overcome obstacles in their environment, using only their bodies and their surroundings to propel themselves; furthermore, they try to maintain as much momentum as is possible in a safe manner. Parkour can include running, climbing, swinging, vaulting, jumping, rolling, quadrupedal movement, and the like, depending on what movement is deemed most suitable for the given situation."  It's an impressive physical achievement to watch and absolutely no wires or CGI were used to accomplish the stunts here.

As Eric wrote, the action is quite well done, but the fight scenes are far from realistic. Damien is a one man wrecking crew who can take out dozens of bad guys with barely a scratch. It's the kind of scene that is fun to watch, but one that is very difficult to take seriously.

The plot, also as Eric said, is fairly thin. We're never given much backstory. It was released in 2004, but takes place in 2010. Just what specifically was supposed to have happened in those six years to cause a wall to be built around a large portion of the city is skimmed over very quickly and is just something you have to accept. It's a plot point that's not even needed. With a minor rewrite it could have just taken place in a poor section of the city without the wall.

But this isn't the type of movie where the plot or the acting really matter. The only reason to watch it is for the action. It's in those scenes that this movie excels. 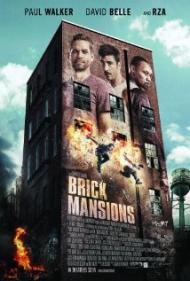