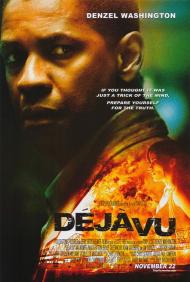 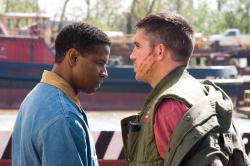 In Deja Vu, ATF agent Carlin (Washington) investigates an explosion aboard a New Orleans ferry, and the discovery of a woman's body whose corpse is made up to look as if she died on the ferry. He is introduced to an agency that is able to look four days into the past. Don't ask. They just can. He ends up looking back at this woman's life to try and find her killer. In the process of staring at her, he falls in love with her. Again, don't ask, just accept.

The movie's most fascinating moment comes when he chases the bad guy down the road four days after the bad guy went down it. Due to a time travel viewing device he is able to see current time and four days into the past as he drives after him. It is the only lively, creative scene in an otherwise spiritless plot.

The cast's performances are all fairly generic. Any actor working today could have played the lead. Denzel is a great actor but this role requires little more than looks of concern. Caviezel maybe trying to stretch by playing the bad guy, but if he wants to be known for more than playing Jesus, he needs to find roles where he does not talk about God, "Satan reasons like man, but God thinks of eternity."

The worst moment comes when Denzel and the girl have to race to the ferry to stop the bomb before it goes off and kills 500 people. First though, they stop off at her place so she can change clothes, he can leave himself a message, that he will find in four days and so they can have a romantic kiss.

Deja Vu tries very hard to connect all of the time traveling dots. Unfortunately, more thought went into the time travel angle than making fascinating characters. First rule of film writing: make a character worth watching. Give them some personality. Everyone in this movie is just going through the motions. 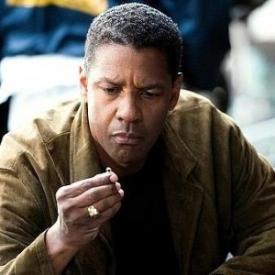 This is one of those movies that has an amazing technology in it that is limited to being a plot device, when really it would affect everything. Hugh Jackman's Real Steel is another movie that does the same thing, only instead of robots as in that movie, it's time travel in this one. The technology to view the past and even travel back in time has been invented, but nothing else has changed and this time travel machine is used only to solve crimes. Eric's right when he says there are some things in this movie you just shouldn't question.

Eric, you seem to blame the cast for being generic, but more of the blame should be laid at the writer's feet than the actors. Denzel does what he can, but there's only so much he can do with this script. It really does feel like someone came up with the time travel angle and then tried to build a story around it. Val Kilmer suffers worse than Denzel as his character is the truly generic one. I don't know why they bothered paying more money for a name actor in his role.

I don't know why you have a problem with Denzel and the girl stopping off in her apartment Eric. They know when the bomb is going to be delivered and when it will go off and they don't want to show up too early. Also, in case you forgot, Denzel has been shot at that point and his cleaning up also involves getting a bandage on his wound.

Part way through the movie, Denzel's character gets the idea of traveling back in time, when before that they'd only used the technology to view the past. I find it hard to believe that no one thought of this before he came up with it. That's one of the many open ended questions regarding the time travel device that the script never addresses.

The story does move along at a pretty good pace, which is good as it keeps you from thinking too much. When Denzel is hunting down the terrorist and racing from place to place, director Tony Scott keeps it tense and interesting, but whenever the story pauses to catch its breath, you start thinking and in this case that's not a good thing.