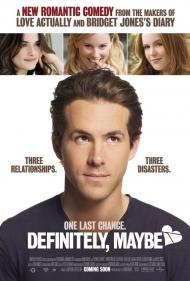 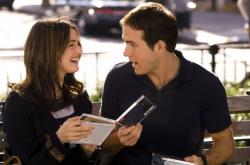 Apart from the glaringly blatant cigarette commercial sandwiched into the middle, I quite enjoyed this light-weight romantic comedy. Although, the ad campaign trumpeting this as the best romantic comedy since Annie Hall is a bit much. I guess that could be true if you hadn't watched any romantic comedies since Annie Hall. Despite the overreaching ad blurbage and the distasteful product placement, this really is an entertaining and sweet movie.

The story of Will Hayes' love life is framed as a bedtime story to his daughter. Will is going through a divorce and to help him and his daughter deal with it, Will tells her the story of his love life, leaving it up to her and the audience to figure out which of the women he will eventually marry; changing the names to keep his daughter guessing.

Reynolds plays a grown-up here and is slightly dull. He's a good-looking guy, but besides that it's hard to see what all these women see in him.

The women are much more interesting. Elizabeth Banks is Hayes' childhood sweetheart who breaks his heart. Rachel Weisz is a journalist who puts her career before her relationship with Will. And Isla Fisher is his best friend. All three of the actresses do a good job and are each more interesting than Hayes. It's also not too hard to figure out who will end up with Will. You can probably guess just from this paragraph.

Most of the movie is set in 1990s, but apart from the constant Clinton references, you'd never really know it. The hair, the costumes, the styles are all quite contemporary. Also, although the movie goes from the early 90s to the present day, none of the characters age at all.

Still, despite these minor problems, the movie has heart and humor; the two most important traits for any romantic comedy. It might not be the classic that Annie Hall is, but it's still a good date movie.

Definitely, Maybe works well enough as a date movie, but the father/daughter relationship seems very insincere. Reynolds is unconvincing as a father. In the flashback scenes Reynold’s is in his element, dating and charming women. When he is with Breslin, he seems more like a baby sitter than a parent.

No doubt, most parents at some time have told their children how they met. Will however, mentions when he gets laid in his story. He even includes mentioning a threesome, to the point that his daughter asks what one is. He does not go into graphic detail about his sex life but he gives enough information to his 9 year old daughter that she later refers to him as a slut. “Dad, I can't believe you drank... and smoked... and was such a slut... But I still love you.” That line is supposed to be funny but I would never want to hear my daughter, even if I had one, ever say that to me, no matter what her age.

As Scott wrote, Will is dull. It is hard to imagine why any of these women would like him. Early on he is simply a liberal sheep supporting and working on Bill Clinton’s campaign. He rattles on about Clinton and even mentions that Clinton comes from a town named Hope, as if that means something, which apparently it does to Democrats as Barrack Hussein Obama is building a Presidential campaign on that same hollow mantra.

Although I was mildly interested to see who Will ended up with, it was not hard to guess who it would be. One woman is clearly not on the same page as him and hardly willing to sacrifice for their relationship. Another is obviously in love with another man. The third one argues with him, and anyone who has ever seen When Harry Met Sally, The Way We Were or any other Hollywood love story knows, true love only comes from disagreeing.

Tell me again about your three way daddy.

It’s rare that I agree with my brother Eric on political or social issues. However I have to admit that I thought it strange and a bit icky for a father to be giving such intimate details about his sex life to such a young daughter. They tried to set this up by having the sex education class at the girl’s school at the very beginning but it still creeped me out. I also agree with Scott that Reynolds’ character is completely dull. I was never able to invest any emotion in Will, which is why I didn’t enjoy this movie at all. Oh and Eric, if you are going to take a shot at a politician, or anyone else for that matter, you might want to at least be sure to spell their name right. There is only one r in Barack.