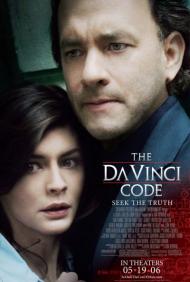 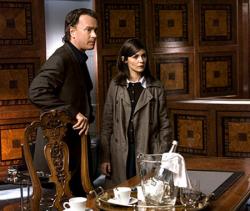 Tom Hanks and Audrey Tautou in The Da Vinci Code.

I am baffled by the negative reaction to The Da Vinci Code. Did the critics who hated this movie ever read the book? Since the movie follows the book pretty closely, perhaps too closely, and so many critics still hated it, I can only surmise that they either didn't read the book or didn't like the book if they did read it. I for one, read the book and enjoyed it, and now have seen the movie and enjoyed it as well.

If you're one of the few who haven't read the book, the plot involves Harvard Professor of Symbology Robert Langdon and his quest to penetrate the secrets of the centuries old organization known as the Priory of Sion. The Priory's mission is to keep secret the location of the Holy Grail. Using his wits and the assistance of French Cryptologist Sophie Neveu and English Grail Scholar Leigh Teabing, Langdon follows the clues from a murder scene in the Louvre, across France and eventually into London.

Arrayed against Langdon are the French Police, a Catholic Bishop, a vicious albino monk and their mysterious patron known only as the Teacher. They wish to prevent Langdon from discovering the secret of the Holy Grail. A secret they believe will devastate the Catholic church and Christians all over the world.

The most common complaints I've heard against this movie are that it's too talky and that it is too long. Both of these complaints are groundless. There is a great deal of information to convey in this movie and so the talking is justified. While the book at times reads very cinematically, it too contains long passages of dialog. Howard actually does a good job of conveying a lot of information in a short space of time. Silas's background, which could have been skipped to save time, is instead told in an ingenious manner in only a couple of minutes. This is a movie that requires some explanation and I for one was never bored during the conversations. As for it being too long, this movie is as long as it needs to be. I'm one of the first people to complain when a movie runs too long, but here there are no unnecessary scenes.

My one complaint is that the movie takes itself very seriously, too seriously. Only Ian McKellen as Sir Leigh Teabing brings a sense of joy to the proceedings. His infectious enthusiasm for the Grail Quest steals the movie as it did the book. A bit more of a sense of fun might have helped quell some of the criticism of the movie's running time.

Only the most exceptional movie ever lives up to the book it's based upon. And while this movie doesn't quite live up to its source material, it is an entertaining summer blockbuster that for once doesn't pass off explosions as entertainment. If you enjoyed the book I don't see how you could fail to enjoy the movie. 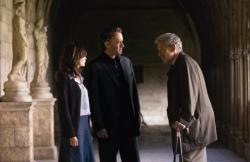 I loved the book and I loved the movie. The big difference is the level of controversy. In the book Teabing says matter of factly that Mary Magdalene was Jesus's wife and that some of Jesus's divinity was manufactured by Constantine and Langdon agrees with his claims. In the movie, Langdon disagrees and questions some of what Teabing says. At the end of the movie Hanks has some lines where he says to the effect that Jesus could have been both divine and married.

Ron Howard's film lessons the controversy greatly. He has Hanks play Langdon as a middle of the road believer. In the book Langdon clearly saw things as Teabing did but in the film he questions many of the statements Teabing makes as facts. This changes the character of Langdon but it does not hurt the story in anyway.

The controversy surrounding The Da Vinci Code has been so exaggerated that it is practically as fabricated a story as the movie is. When this movie opened in my local theater, I happened to be driving by and saw 3, that's 3, people standing outside holding posters protesting the movie. That night on the news they showed the same people in extreme closeups so as to not reveal how few people actually cared to object. The news was trying to make a story where there was not one.

The Da Vinci Code is a great book and movie whose controversy is only significant if you want it to be. 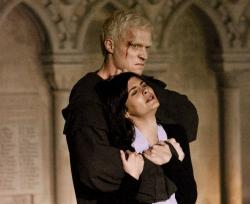 Paul Bettany and Audrey Tautou in The Da Vinci Code.

I never read the book and I don't remember any of the controversy surrounding this movie, although just a quick bit of research online reveals that it was banned in many countries. As Eric mentioned, Robert Langdon's views were changed for the movie so as to downplay the controversial subject matter, which shouldn't be controversial at all since regardless of what anyone believes about Jesus none of us has proof one way or another. Why should one person's beliefs be more valid than someone elses?

And besides it is a matter of history that centuries ago Catholic priests were allowed to marry before the Vatican changed the rules in order to keep all church property in the hands of the Papacy. So why wouldn't Jesus have married? It has also been proven that the church was selective about which gospels made it into the version of the bible we all know today. It is certainly easier to deify a man several hundred years after his death than during his lifetime.

Tom Hanks is terrific as Langdon. He is incredibly intelligent but thanks to Hanks he never seems pompous or pedantic. He is sort of a thinking man's Indiana Jones. The mystery is compelling and intriguing and there is enough action to keep the story chugging along. It certainly didn't deserve the many scathing reviews it received.

Angels and Demons, the sequel to The Da Vinci Code, did slightly better with critics, although I think it's an inferior movie. I have read The Lost Symbol, Dan Brown's 2009 novel that also features Robert Langdon, only this time in a mystery set here in the United States. A movie is in the works, which I will be glad to see once it's released. 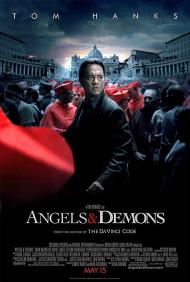