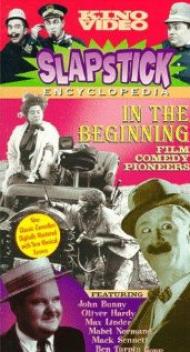 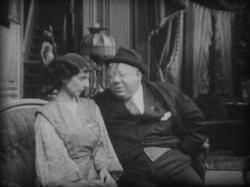 A Cure for Pokeritis is a Vitagraph short starring the now forgotten John Bunny (1863-1915) and his frequent female costar Flora Finch (1867-1940). It was released in February of 1912. To put that in historical context this was two months before the maiden voyage and sinking of the Titanic.

This one-reeler is about a wife who discovers that her husband has not given up his weekly poker night out as he has promised and so she takes matters into her own hands. After suspecting her husband of lying she calls up her male cousin and he follows the husband on his next night out (he’s supposed to have joined some civic minded organization). When the cousin verifies that the husband is in fact still playing poker they devise a plan of action.

The cousin enlists the help of his all male bible study class to dress as policemen and raid the poker game. Meanwhile the wife has contacted all the other poker players’ wives and told them to meet her at the address where the poker club is. The fake police rush in first, startling the men and stopping the game cold. After a few seconds of confusion the wives enter the room and each goes to her husband finger pointing and chastising. The End.

There is nothing particularly funny about this short. It may have caused husbands and wives to titter with familiarity at the situation back in 1912, but a hundred years later it fails to amuse.

John Bunny was a very fat man. One thing I have noticed in watching these early silent comedies was that there was almost always an incredibly obese person, usually a man, somewhere in the movie. Fatty Arbuckle would become the most successful of this type, but John Bunny was one of the first famous “fat” picture actors.

The cousin Teddy character represents another common stereotype. He is fastidious and effeminate, has fussy hand movements, belongs to a bible study group and clearly deplores poker. He immediately takes the wife’s side in the situation. Any modern audience would see him as obviously gay. There were many characters like this in movies in those days. They were always supporting characters such as an unmarried uncle, a cousin or maybe a butler, tailor or waiter. The other male characters would often poke fun at them; although their sexual orientation was never directly referred to there was the unspoken inference that they were “different”.

Like the stereotypical fat man and fey man, only in even smaller roles, were black characters, notice the black man playing a waiter at the poker club in this movie. Minorities were always there, in the background, since the dawn of the motion picture. Still being an extra or supporting character in a movie wasn’t so bad. As Hattie McDaniel so famously said, “I’d rather play a maid than be one.” 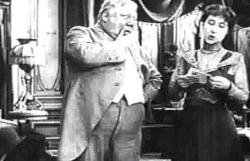 John Bunny and Flora Finch in A Cure for Pokeritis

There is so little plot to A Cure for Pokeritis that it could have been told in two minutes.   Even though this short is a mere dozen minutes, it seems to drag.   He plays poker, she objects and plays a simple little joke on him.

So bored with the (lack of) story I noticed that many of the mens suits would not be so out of place today.  They are basically the same as what is still worn.  The women's clothing however, would be viewed as a costume today.   Why has men's clothes changed so little while women's so drastically?

Patrick has often written that many shorts crammed a lot of plot into a little amount of time.  This is not the case with A Cure for Pokeritis.  They should have called it A Cure for Insomnia. 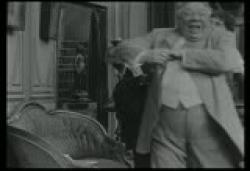 John Bunny in A Cure for Pokeritis.

I think I know who the intended audience was for this movie. It's a comedy for people with heart conditions. Worried, lest this audience might die of shock if something funny, entertaining or interesting happens, Vitagraph studios decided to make a movie that isn't any of those things so as not to put undue strains on their condition.

Seriously, this is the longest build-up to the lamest practical joke in history. A wife gets her cousin and his friends to dress up like policemen and interrupt her husband's poker game. Oh, stop me from laughing...my eyes are watering and I can't breathe.

More interesting than the plot was learning about John Bunny. He was only active in the movie business from 1909 until his unexpected death in 1915. He was an early film celebrity who at one time was billed as, "The man who makes more money than the president"! He supposedly had his face insured for $100,000 and his death made headlines around the world. Also, according to interviews years later with his co-stars, he was arrogant and difficult to work with. I guess, it's not just men's suits that haven't changed all that much, but also star's egos.