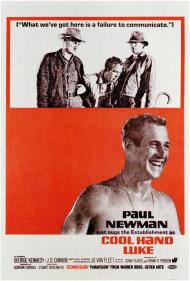 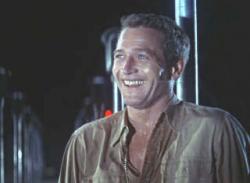 "What we've got here, is failure to communicate." One of the great movie lines from what I think is Paul Newman's finest onscreen hour. Strother Martin, as the sadistic chief warden of a Southern chaingang, memorably delivers it when Newman's 'Cool Hand' Luke gets captured after an escape attempt. This is the most famous moment in an all around brilliant movie.

The story plays like a fable. During the titles Luke is shown drunkenly cutting the heads off parking meters. For this act of vandalism he is sentenced to hard time. At first he is treated as just another new prisoner by the rough and tumble veteran convicts he finds himself among. They bet on wether or not he will make it through his first grueling day in the ditch. He does, just barely, but soon makes an enemy of a big, gregarious inmate called Dragline (George Kennedy), the unofficial leader of the motley chaingang.

When Dragline challenges Luke to a warden sanctioned boxing match everything changes. Luke gets beaten to a pulp but refuses to admit defeat. He just keeps staggering to his feet and taking feeble swings at his opponent only to be knocked to the ground each time. Finally, by sheer will, he is able to emerge the victor. Dragline walks away in disgust, leaving the bloody Luke standing unchallenged in the prison yard. It is a powerful scene that superbly defines the two main characters of the story.

After the fight Dragline realizes he has met his match and happily assumes the role of sidekick to Luke. It is Dragline who gives Luke his nickname after watching him cooly bluff his way through a poker game. Through the force of his personality and attitude 'Cool Hand' Luke becomes a hero to the other men. He inspires them to haul ass shoveling dirt on a freshly tarred road, thus giving them several extra hours of leisure while pissing off the guards in the process. There is also the famous scene where he eats 50 eggs in an hour to win a bet.

It is here where the first act of the movie ends; Luke, his belly swollen with hard-boiled eggs, splayed out on a table in a pose that blatantly emulates Jesus on the cross. The religious symbolism doesn't stop there. Luke's prison shirt displays the number 37 in a subtle reference to the Bible. Luke 1:37 states, "And nothing is impossible with God." His final scene in the church where he addresses God - "Hey, Old Man" - clinches the cinematic metaphor of Luke as Christ.

Luke's dying mother (Jo Van Fleet) pays him a visit. Without much exposition this scene gives some insight into Luke's background. It is really all we are shown of his life before his sentencing.

To make a long story short, Luke makes several escape attempts before being beaten into submission by the bosses. He becomes a flunky for the guards and gets the cold shoulder from all the other inmates once he stops representing freedom of spirit to them. But of course this is a man whose spirit can never be chained and he makes one last escape attempt that results in his final martyrdom.

Paul Newman is amazing in this movie. With a cocky charm and shit-eating grin he exudes a cool that perhaps only Steve McQueen could have matched. However Newman is a much finer dramatic actor than McQueen ever was. The scene where he learns of his mother's death is simple yet effective. He sits strumming a guitar and quietly singing a hymn while tears stream down his face. In another scene, after one of his captures, he lets loose a primal yell at the other convicts to - "Stop feedin' off me!"

Many well known actors play fellow inmates including Dennis Hopper, Harry Dean Stanton, Wayne Rogers and Ralph Waite. George Kennedy won the Supporting Actor Oscar for his right-on-the-money performance of the dumb, jovial Dragline. But make no mistake this is Paul Newman's movie from beginning to end and he should have won the Oscar for it. 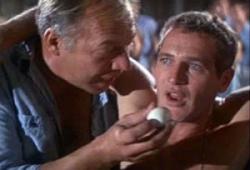 Newman did deserve an Oscar for this role, but he had some pretty stiff competition that year. He was facing Warren Beatty for Bonnie and Clyde, Dustin Hoffman for The Graduate, a posthumous Spencer Tracy for Guess Who's Coming to Dinner and eventual winner, Rod Steiger for In the Heat of the Night. I mean seriously, talk about an overflowing cup of acting riches! Still, I would put Newman's performance against any of those. And, out of all those films, Cool Hand Luke has aged the best.

There are other, Luke as a metaphor for Christ, touches in the film. Like Jesus, Luke is betrayed by one of his disciples when Dragline leads the police to where he is hiding. He is "killed", falling into a grave and losing his spirit, only to rise again a few days later, when he escapes for the last time. And to the men of this chain gang, he certainly acts as a kind of savior.

The real message of this film though is that life is forever trying to beat you down, but so long as you keep getting back up, it can never truly beat you. Luke in the boxing ring with Dragline, continuing to fight long after he's lost, is the most blatant example of this. Luke teaches this to the prisoners. It's a similar theme to One Flew Over the Cuckoo's Nest, with Luke and McMurphy sharing certain traits. Both of them find that keeping yourself on your feet is hard enough without trying to hold up others as well, although both of them do their best to do just that anyway.

What's great about the movie though is that it can be enjoyed on so many levels. I remember watching it as a kid and just enjoying the action and some of the humor. It was just a prison movie to me then with a likable lead. Then years later I noticed the similarities to Christ. And then finally, after some life experience, I noticed the real meaning.

This is also a very visceral movie. You can practically feel the heat and the sweat on yourself when you watch it. It's heavy in atmosphere and feels very southern, even though it was actually filmed in Southern California. You certainly have to give the director and cinematographer their due.

You're right Patrick that no other actor could have played this part quite so well as Newman. Luke's smile and blue eyes are such a part of the character that who else could play him? 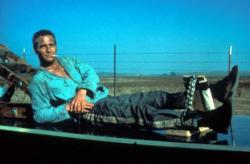 Cool Hand Luke is classic in so many ways.  It starts with Paul Newman's smile as the police arrest him for vandalism.  It continues with Strother Martin's first line, "Wha-day bring us today?", and then through all the scenes and dialog my brother's mentioned.

Patrick and Scott wrote of Cool Hand Luke as an allegory to Christ with plenty of religious symbolism.  Patrick mentioned the scene with Luke laying on the table after eating the eggs in a postilion reminiscent of Christ on the cross.  The following scene also has Christian symbolism.  The men jump out of a ditch as a snake crawls through it.  In the Bible, Satan is represented as a snake.  Luke is the only one not afraid of the snake and grabs it.  Near the end they have dinner where the other prisoners eat of Luke's plate.  John 6:54, "He that eats my flesh, and drinks my blood, dwells in me, and I in him."  Later, a broken Luke yells out to no one in particular, "Where are you now!"  Matthew 27:46, "Why Hast Thou Forsaken Me?"  You could watch this film with a Bible in hand and never stop finding symbolic similarities.

I disagree with Scott that the theme is, "...life is forever trying to beat you down, but so long as you keep getting back up, it can never truly beat you."   I would agree if Luke had not committed the crime.  He got what he asked for.  Life is not trying to beat Luke down, Luke just refuses to play by life's rules.  And there is the true theme of Cool Hand Luke.

Luke is an existentialist anti-hero.  He lives by his own rules, needing no one's approval, finding his own sense of freedom.   This character became somewhat common in post World War II films.  From The Magnificent Seven to The Godfather, we find men who chose to live within society but by laws of their own design.   Luke's destruction of the parking meters could be viewed as his statement against the status quo of capitalist oppression.  When in the prison society he refuses to play along with the established hierarchy.  He does not recognize Dragline as the leader, as everyone else does.  Even in the scene with the teasing blonde, it is Luke who makes the statement that, "She knows what she is doing...", while the rest of the men are only thinking with their erections.   When one guard locks Luke in the box, saying he is only doing his job.  Luke tells him, "Calling it your job don't make it right, Boss."  Luke would never use that kind of excuse.  He is the epitome of the modern existentialist.

Whether you see Luke as a Christ figure, a man fighting against an oppressive society or an existentialist, you have to admit that this is one awesome film.  The fact that you can watch it from several different directions and still come away impressed, is proof that there are several distinct layers to this very thought provoking masterpiece. 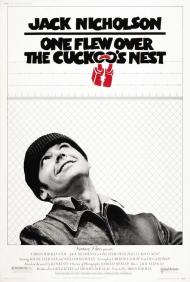