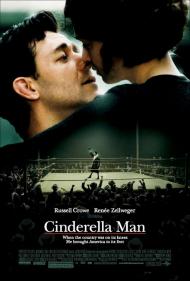 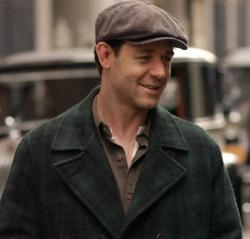 When it comes to schmaltz, no one does it better than Opie Cunningham himself, Ron Howard. Just the previews alone for Cinderella Man were enough of a warning that the sap would be running pretty high with this one. And yet despite all the melodrama, the movie remains entertaining throughout mainly due to the strong performances of its stellar cast.

In the late 1920s, Jim Braddock (Crowe) was a rising star in the boxing world who seemed to have it all. A combination of injuries and financial losses due to the stock market crash of '29 seemed to bring all his dreams to an end as he was stripped of his boxing license and forced to support his family with whatever work he could pick up on the Jersey docks. However, when a contender is forced to drop out of a bout at the last minute and no other boxer can be found at such short notice, Braddock's old manager (Giamatti) gets the boxing commission to allow Braddock back in the ring for one last fight. Knowing now that the difference between winning and losing is how much food he can provide for his wife and children, Braddock finds the motivation that he lacked in his younger years. After winning that first fight he finds himself on track to face the reigning heavyweight champion of the world, Max Baer (Bierko), a man who has killed two opponents in the ring.

At the heart of this story is Crowe's performance as Braddock. Whatever telephone tantrums he might throw in real life, there's no denying Crowe's acting ability. He conveys with utter sincerity the feelings of desperation of a man trying to feed his children and hold his family together. At his lowest moment, Braddock is forced to sign up for public assistance and when this proves to be not enough, to go begging for a handout from the very boxing officials who stripped him of his license. Later, when asked by a reporter what it is that he's boxing for, Braddock replies simply, "Milk."

And Crowe isn't alone in turning a great performance. Giamatti, who should always stick to character work, is terrific as the boxing manager trying to keep up appearances of success amidst the depression. Zellweger does a nice turn as Braddock's wife and a buffed up Bierko chews up the scenery as the master showman Baer.

Perhaps the movie's only weakness is its running time. At 2 hours and 24 minutes, it could have been trimmed. A subplot involving a friend of Braddock's down on the docks never really goes anywhere and could have been dropped altogether. It would certainly have picked up the pace of the middle third of the film.

Howard might lay the emotions on thick with this movie, but he does it with the experienced hands of an expert that somehow manages to keep it all from going too far and instead genuinely moves you with the story. 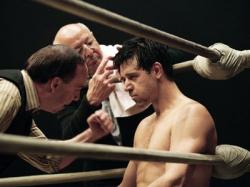 This is a sport's movie about an underdog in the 1930's who faces difficult odds to make a dramatic comeback and win a big event at the end of the film. In the course of doing so the underdog inspires a nation of down trodden folk suffering from the depression. Of course I am writing about Cinderella Man, but I could be just as easily writing about Seabiscuit. Switch from boxing to horse racing and you have basically the same plot.

Crowe is comfortably suited to Braddock as it is his best type of character. That of the sensitive man with plenty of hidden aggression. Zellewegger is good but has little to do but look fondly at Crowe when she is not busy looking worried. Bierko does the surprise performance of the movie. Bierko has a long career from a soap opera to musical theater to the bad guy in one of my favorite action films, The Long Kiss Goodnight. He is almost unrecognizable here as the real life boxer Max Baer.

Although inspirational, Cinderella Man is a bit long and repetitive. We see more than enough of the families struggle to get it. We see enough boxing to know what it is about. Sports movies are never really about the sport anyway.

What I also must note is that Cinderella Man and Seabiscuit are both about how the media at the time was desperate for a positive story to write about during hard times. It seems these days the media will ignore positive angle stories to promote negative ones. Talk to a soldier who has come back from Iraq and they wil tell you about the good that they have done over there. Watch the network news and we see the number of dead soldiers and the latest bombing. Now why is the media so negative in these current hard times? Why, why, why. Oh.....thats right! There was a democrat in the white house then. Silly me. 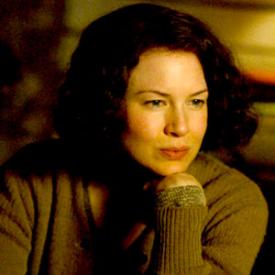 Cinderella Man plucks at the heart strings like a well-tuned instrument. There's something about sports movies, but specifically boxing movies that makes you want to cheer along. I get Eric's comparisons to Seabiscuit but wasn't that movie actually about the jockey more than the horse?

Russell Crowe is a good actor, if a bit overrated. As Jim Braddock he seems to have found the perfect role. He's an everyman with the guts and determination to do what it takes to feed his family and keep them together during difficult times. It is a quiet, less showy role than Crowe usually plays and because of that I think it is his best work to date.

Zellweger and Giamatti give great support. They both look and sound like they belong in the 1930's. Too many period movies fail to recreate this important detail. You can't have a modern hair cut or speak with a 21st century cadence if you live in another time period Jack Black.

After watching this movie it dawned on me that Max Baer must have been the inspiration for the huge boxer that Bugs Bunny fights in one of his classic cartoons.

Cinderella Man is sentimental and uplifting. And it proves that yes, Ron Howard is a master of schmaltz, but so was Charlie Chaplin for that matter.