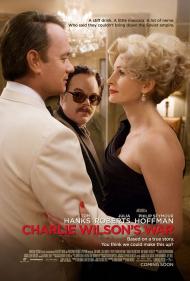 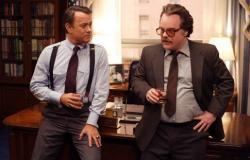 Normally I avoid any movie that involves the Middle East. This isn't because I'm not interested in what's going on over there, but because I'm not interested in what Hollywood thinks about what is going on over there. And judging by the box office numbers this year of other movies set in the Middle East, no one else in America is interested in what Hollywood has to say about either. Charlie Wilson's War however, intrigued me enough so that I ignored my usual rule. As it turns out, I'm quite glad that I did, since it turns out to be one of the more enjoyable movies of the year.

It probably helps that the movie stars Tom Hanks, quite possibly the most likable actor working today. I mean seriously, can you even picture Hanks playing a villain? He plays Texan Congressman, Charlie Wilson; an alcohol swilling, womanizing, old school kind of guy. His personal staff is made up of young, attractively well-endowed women, because as he says, "You can teach them to type, but you can't teach them to grow tits." Despite his relaxed style, Wilson sits on several important congressional committees. Just those committees needed by Joanne Herring (Roberts), the sixth richest woman in Texas, and someone who is very interested in seeing the Russians beaten out of Afghanistan. Oh, the movie is set in the 1980s, during the time of the USSR's invasion.

Joanne convinces Charlie to visit Pakistan and view a refugee camp. Charlie comes back convinced. He enlists the help of CIA man, Gust Avrakotos; played with hilarious foulness by Phillip Seymour Hoffman. The combination of Joanne's money and influence, Charlie's political connections, and Gust's covert experience gives them enough traction and ability to start sending arms and aid to Afghanistan.

What really makes this movie work are the performances and the snappy script by television's Aaron Sorkin. Hanks is terrific. A different actor could have made this boozing congressman seem slimey, but with Hanks its just good old boy charm. Hoffman is great as Gust with a Best Supporting Actor worthy performance. Amy Adams, plays Hanks assistant. She's underused, but she's terrific in anything she does. Perhaps the only weak part of the movie is Roberts and Hanks chemistry. And that's because there isn't any. They just seem like friends. There's no impact at the end of the movie when they're talking on the phone, as it seems there's supposed to be.

The main reason I avoid those Middle East movies is that whenever Hollywood makes a movie about that area, it loses its sense of humor and decides that making a political point is more important than entertaining the audience who just paid $10 to be entertained. Charlie Wilson's War is both funny and entertaining. In fact, as far as making political points, you kind of have to look for them. It makes no overt connections between the events in this movie and the current state of affairs in Iraq. I would even argue that this movie's point is that we should see things through in Iraq rather than pulling out quickly, since its main point is that the biggest mistake America made in Afghanistan in the 80s, was not helping to rebuild the country, but instead leaving them to their own devices after the Russians left.

Whatever its political point of view, this movie, probably because of veteran director Mike Nichols, knows how to deliver an entertaining and refreshingly short (97 minutes) movie. That's all I ever ask for. 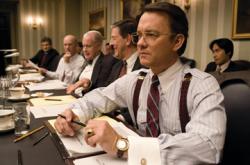 Although Scott had to look closely for the political points in this movie, I saw them right up front. First and foremost, is that Charlie Wilson is a Democrat. The movie, for some reason, avoids making that clear. Republicans have always put Ronald Reagan up on a pedestal as the man who ended the cold war. This movie tries hard to give credit to Wilson for doing just that. Perhaps, in fact, he deserves some, but Reagan and his policies are nowhere in sight in this film. Most of the movie takes place during the Reagan era, yet the only time he is referenced is when a picture of him is in the background of a scene.

Scott is correct that, "...this movie's point is that we should see things through in Iraq rather than pulling out quickly." This is very much a Republican view. To make the political balance, the movie throws some issues toward the left. In one scene, that has no purpose other than to give a nod to a liberal point of view, Wilson refuses to stand up for keeping a nativity on government property.

Beyond all of the politics, this movie has some great moments, but lets be honest, this movie is all about politics. The scene at the end where Hanks and Roberts talk to each other over the phone, as each are retiring for the evening, is symbolic of the old adage, "politics makes for strange bed fellows." My favorite line in the movie is when Hanks says to Adams, about the leader of Pakistan, "You know you've pretty much hit rock bottom when you've been told that you have character flaws by a man who hanged his predecessor in a military coup." 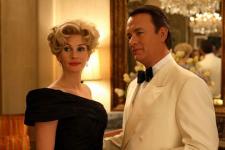 Hanks and Roberts have a definite lack of chemistry.

Eric you contradict yourself in your first paragraph. You state that the movie, for some reason, avoids making it clear that Wilson is a Democrat. You then go on to say that it tries hard to give Wilson credit for ending the cold war. If they were trying so hard to be partisan why avoid telling us Wilson’s party affiliation? And the United States military did present Wilson with a medal so they must have thought he deserved some credit for ending the cold war, but to read your review it sounds like it was something dreamt up by the filmmakers.

The fact is, unless you are like Eric and see liberal Hollywood conspiracies behind every cinematic tree, this movie does not take sides politically. Wilson is shown as an alcoholic, womanizing coke head. Not exactly a poster boy for the left. And the religious right is shown in a balanced way as represented by Roberts’ Joanne Herring.

I agree with Scott that this movie entertains and moves along at a refreshingly brisk pace. I also agree about the lack of chemistry between Hanks and Roberts. She has more chemistry in the brief scenes she does with Hoffman. It will be interesting to see where her career path takes her now that she is on the north side of forty.

Charlie Wilson’s War is an entertaining look at an underreported era of United States history.