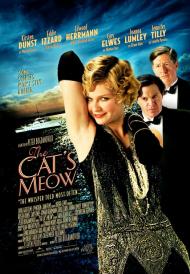 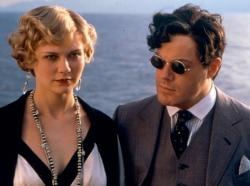 The Cat's Meow tells the story of an actual incident that occurred on a yacht during the 1920's, featuring some of the era's most famous movers and shakers. There's movie star Charlie Chaplin, Media Mogul William Randolph Hearst, Hearst's mistress Marion Davies, Movie Director and the inventor of the Western Thomas Ince, and journalists Elinor Glyn and Louella Parsons. Along with a few other hanger ons. They form a party and embark on Hearst's yacht for a few days of fun, sun, and sin. And then, of course, one of them dies. No one has ever reported what actually occurred on the yacht over the course of those few days, but as Joanna Lumley says in character in the beginning, 'There were many whispers over what happened during those few days at sea, and this is the most repeated whisper.'

Let me say up front that I thought this was an incredible cast and I thought they were all fantastic at bringing their character to life. Edward Herrman plays Hearst as a paranoid, weak/strong man, who lashes out at others not because he's this all powerful publisher, but like a child who strikes back out of petulance and sulkiness. Eddie Izzard, while not even trying to do an actual impersonation of Chaplin (for that go see Robert Downey Jr.'s brilliant performance in Chaplin), manages to capture the relaxed charm of a movie star at his height. It is Jennifer Tilly as the young, soft-husky voiced, Louella Parsons who steals every scene she is in. Her humorously, naive exterior, hiding a coiled viper just beneath the surface is the best and most entertaining character in the movie.

My problem with this fairly enjoyable movie is one of point of view. The movie begins from the perspective of Elinor Glyn. She begins by narrating the movie and we see everyone's arrival at the yacht through her eyes. However, once on board, we lose the narration and the movie tries to show the events from everyone's point of view and it loses it's focus. Who's the star? Who's the protagonist? Who's the antagonist? It becomes more an account of the events instead of a story of the events. You are left to chose between the characters rather than any one clear point of view. Had they kept the narration, or had the events only been played out through Elinor Glyn's eyes, I think it would have made a stronger movie. 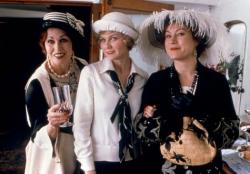 While certainly an interesting and entertaining movie, The Cat's Meow is lacking that little extra something that could have elevated it to the pantheon of great movies. The story told is fascinating enough, filled with larger than life characters shown behind the scenes, away from the prying eyes of  their adoring public. The time period of Hollywood in the twenties is captured well and the cast, as Scott mentioned, all do good work.

What is lacking, I think, is plot. Sure famous people on a yacht where a murder takes place is fine but other than that nothing really happens. Marion Davies flirts with Charlie Chaplin to make Hearst jealous and the rest of the guests sit around either gossiping or dancing the Charleston. The flappers and black jazz musicians are absolutely one dimensional stereotypes which would have been OK if this was a broad comedy. But with Bogdonavich trying to walk the line between comedy and drama makes them seem very cardboard.

Still as a huge fan of the time era I can't dislike any movie which has both Elinor Glyn and 'Lolly' Parsons in it. 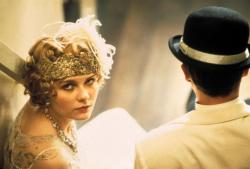 The Cat's Meow is not an actual true story so why not embellish even more? On board this boat is sex, drugs, jazz, famous people, a love affair and a murder. All of that, and the movie still isn't exciting.

As a movie buff, I enjoyed watching these long dead movie stars paraded around as nitwits. In this film, Charlie Chaplin is all about the chase and not the catch. Marion Davies is a gold digging tease. Hearst is a spoiled brat. No one in this movie is likable. I watched it as if I were a million miles away. I never felt as if I understood or cared for anyone on screen.