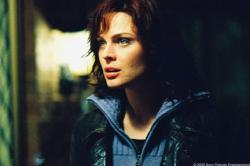 I know that the time between New Year's Day and Oscar Night has traditionally been a dumping ground for bad movie releases, but why is it that this year, all of the really bad ones are horror movies? So far, we've seen White Noise, Alone in the Dark, Hide and Seek, and now Boogeyman. And all of them were terrible movies. To be fair to Boogeyman, it is slightly better than the others, but that's attributable more to just how bad the others were, rather than to any exceptional qualities of its own.

In terms of plot, the story is so similar to 2003's Darkness Falls, that it's a wonder the producers of that film aren't suing the producers of this one. If you saw that earlier movie, this will all sound very familiar. A boy experiences a traumatic and supernatural event in his childhood that results in the death of one of his parents and scars him for life. Years later, as an adult he lives in fear of it happening again. Events eventually lead him back to his childhood home where he's reunited with a childhood sweetheart and faces the demons from his past.

The monster that he must face is the mysterious Boogeyman; a supernatural monster that lives in closets and under beds. As a child, he lived in fear of the spirit after his father told him about the creature in stories. When his father is actually killed by the Boogeyman; sucked into the closet and destroyed, the boy learns that the stories are all true.

At times, the movie manages to be creepy and there are a couple of jump moments, but none that you can't see coming. The childhood home that he returns to is almost stereotypically creepy with its remote location and desolate landscaping. Only toward the end of the film when he begins to confront the monster does the movie display anything approaching originality. Sadly, what glimmers of hope that develop are dashed with the conclusion of the story, which can only be described as lame.

The sex and violence is all kept to a very safe PG-13 level and made me pine for the good old days of 1980's horror films where at the very least you were given the opportunity to ogle and wince at the voyeuristic sense of gruesomeness.

With the resurgence of horror films, ever since the success of The Ring, you'd think that at least one out of the glut of movies being released would be entertaining, but so far, they've all been disappointments. Perhaps The Ring marked the beginning of this phase of horror films, and its sequel, due out this year, will mark the end of it.