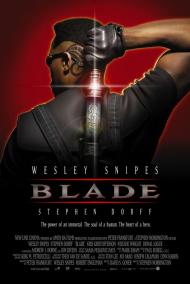 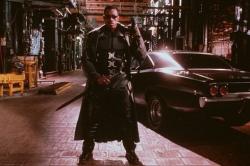 Blade is Wesley Snipes' one and only bid, thus far in his career, for movie immortality. He has the right amount of muscle and attitude to play the half vampire/half human vampire slayer. "There are worse things out tonight than vampires." He tells a doctor he has recently saved. "Like what?" she asks. "Like me!" he replies.

Blade became a vampire when his pregnant mom was bit by a vampire just before giving birth. With the help of some drugs developed by fellow vampire killer, Abraham, Blade is able to suppress his desire to drink human blood. This first installment of the Blade series has Blade doing battle with an insecure vampire named Frost. He was not born a vampire and thus is scorned by those that were. He wishes to summon the blood god La Magra, and rule over the vampires and humanity, or as Frost says, "We're the top of the fucking food chain!"

The Blade series treats vampires differently than Bram Stoker. They have sex and children. They are not affected by traditional forms of dispatching vampires. Blade explains, "...crosses and holy water don't do dick so you forget what you've seen in the movies." Snipes plays the brooding, rebellious action hero as good as anyone. Due to his martial arts knowledge the action scenes work well for him. However, he never makes the audience care enough about him. Sure you want to see him slaughter the bad vampires, but he plays Blade too cool to really generate any sincere affection for him.

Blade is a great action flick that only suffers from some weak characterization. 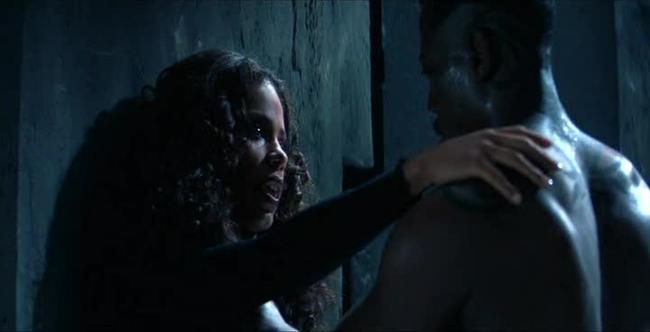 Blade is absolutely Wesley Snipes's best shot at movie immortality. This is the perfect marriage of actor and character. Snipes has the requisite looks and athleticism the part calls for, plus he's a decent enough actor that he can convey the tragic yet defiant qualities and terse personality of the character well. Blade's a man of few words who rarely reveals his feelings. When he does deign to speak he communicates succinctly. “Some motherfuckers are always trying to ice-skate uphill.” or “You tell him it's open season on all suckheads.” are just a few of his pithy quips.

The closest Blade comes to actual character development is during a rare quiet heartfelt moment when Karen, referring to Whistler, says to Blade, “You have a lot of love for him, don't you?” Blade responds pragmatically, “We have a good arrangement. He makes the weapons. I use them.” But there's something about the way Snipes delivers these lines that lets the audience know just how much he really does care about the old man. Kris Kristofferson is great as Abraham Whistler. He favors scatological wisecracks. He describes an ancient piece of parchment as smelling like, “...a vampire wiped its ass with it.”

Watching this movie today it becomes quite clear just how influential it was. The Matrix, which hit theaters the following year, certainly owes a debt to the fight scenes in this movie. In one scene Blade shoots at Frost and he dodges the bullets, which the camera follows in slow motion. These action scenes hold up pretty well for a movie from the last millennium. It features some early CGI but it isn't overdone and looks less dated and cheesy today than a lot of the computer generated images from that era. Blade also borrows from other movies. The grotesquely obese Pearl, the vampire record keeper, is an obvious Jabba the Hutt knock-off, for instance.

The women get in on the action too. N'Bushe Wright, as Dr. Karen Jenson, saves the day with her serum and she gets to take part in the fight scenes too. Sanaa Lathan is seductively sinister as Blade's mother. Their storyline has to be one of the most dysfunctional parent/child relationships in all of cinema. Stephen Dorff makes a memorable villain. He's one gleefully evil bloodsucker.

The 1990s saw a metamorphosis in the vampire movie sub-genre. Up until then, with the exception of a few comedy-spoofs, nearly every movie featuring the undead had always been a horror film. Interview with a Vampire was the first to break that rule in 1994. It ushered in the new age by bringing romance and melodrama to vampire lore. It still contains plenty of gore but at heart it's really a drama. Blade was the first vampire movie that's really a superhero type action flick. The Twilight series borrowed ideas from both of these previous movies with incredibly lucrative results. 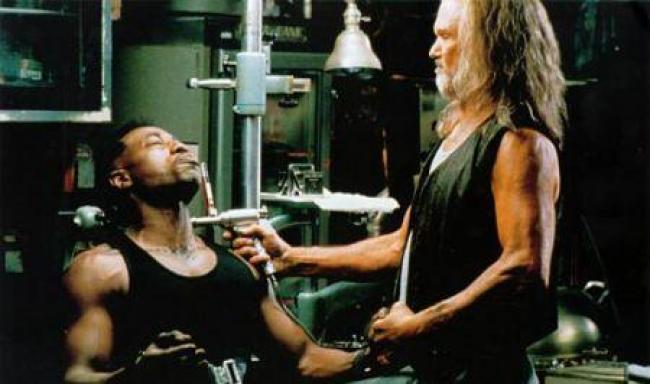 Blade was the first vampire/superhero movie and interestingly, although I've never heard it get much credit for it (apart from Patrick in his review of Blade 2), was the first superhero movie of the modern era. It beat X-Men into theaters by 2 years and Spider-man by 4 years. The last big budget superhero movie prior to this one was 1995's jokey Batman Forever. This was the first one with modern special effects to take itself and its subject matter seriously. It influenced more than just the Matrix films.

Part of that influence must be attributed to its screenwriter, David S. Goyer. Not only would he continue to write, with diminishing success, the other two films in this series, but he also wrote or co-wrote, Dark City (1998), Batman Begins (2005), Jumper (2008), The Dark Knight (2008), The Dark Knight Rises (2011), Ghost Rider: Spirit of Vengeance (2011), Man of Steel (2013), and the upcoming Batman v Superman: Dawn of Justice. A self-confessed lifelong comic book fan, Goyer has also written for several comic book related television series. He also courted controversy amongst comic book fans when he said in an interview, in reference to She-Hulk, that she was "a giant green porn star that only the Hulk could f**k."

As both my brothers said, Snipes is perfectly cast as the title character, despite some changes from the original comic book story. In the original story, Blade was born in London in 1929. Although the film states that Blade ages like a human, he was originally conceived as aging slowly. He first appeared in comics in 1973 when his look was modeled after football player turned actor, Jim Brown. He was created at a time when the Blaxploitation movement was its height and his manner of speaking reflected that. Writer Marv Wolfman has said, "The early Blade dialogue was cliche 'Marvel Black' dialogue. Later on, I tried to make him more real. But it took growing up as a writer." Although he would appear sporadically over the intervening years, it wasn't until the early 1990s that he really came to prominence in the pages of his own comic book series.

Although the movie takes its subject matter seriously, it also has fun with the character and acknowledges that the filmmakers realize how outlandish the premise is, but without ever stooping to the self-mockery of the Tim Burton and Tim Burton-influenced Batman films. My brothers mentioned some of the dialogue that reflects this, but perhaps the greatest example is when, during the climactic battle, Blade's trademark sunglasses are sent flying through the air and Blade is able to extend an arm, grab them in mid-flight and then snap them on in a perfect hero pose. Sure, it's laughable, but it's also in keeping with the character and the tone. It's ludicrous, but badass at the same time, which is a tricky line to walk.

I hadn't seen this movie since its release and it surprised me by how much I enjoyed it. The two disappointing sequels colored my memory of the original. True, there isn't a lot of character development here, but then there rarely is in superhero movies. But as Patrick said, it's stylish and fast-paced. It's also a lot of fun. 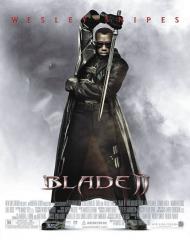 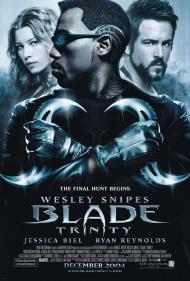