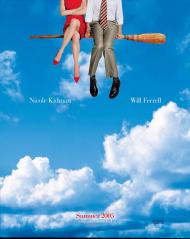 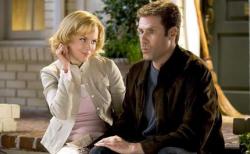 Nicole Kidman and Will Ferrell in Betwitched.

So many old TV shows have been remade into the movies that the idea has been done to death. However, Bewitched takes the novel approach of not being a remake, but a movie about the remaking of an old TV show. Naturally, the events in the movie mirror the situations from the old Bewitched show, but with a freshness not usually seen in your typical remake.

Nicole Kidman stars as Isobel, a real life witch looking to give up magic and lead a normal life. Ferrell is Jack Wyatt, a has-been movie star reduced to starring in an updated version of Bewitched. At the urging of his agent (Schwartzman), Jack insists that the role of Samantha goes to an unknown and when he sees Isobel wiggling her nose, he hires her immediately. When Jack's ego rides roughshod over Isobel however, he discovers that Hell hath no fury like a Wiccan scorned.

As far as mismatched couples go, you can't get further apart than Kidman and Ferrell. With her ethereal beauty, she's the embodiment of a heroine from some Victorian ghost story. While Ferrell will always be Frank the Tank from Old School to me. They do generate some good comedy between the two of them, but the humor could have been taken even further if their differences were played up more. Ferrell has been tamed and groomed for this movie into sort of a 21st century Tom Hanks, although much funnier. In fact, considering that Nora Ephron directed this movie, you can just imagine that if it had been made a few years ago, it would have starred Hanks and Meg Ryan in the lead roles.

Along with the stars, the movie features an impressive supporting cast. Michael Caine plays Isobel's Warlock, womanizing father who pops in from time to time to offer her advice, usually in the oddest places. Shirley MacLaine has a small part as the actress playing Endora in the new show. Broadway's Kristin Chenoweth is funny as Isobel's excitable best friend and next door neighbor. But it is Steve Carrell who gets the biggest laughs with his dead-on Paul Lynde impersonation as Uncle Arthur.

One of the most ironic things about the plot is that Jack is upset that Isobel scores higher with audiences then he does and he wants more screen time then her. Where as in this actual movie, while Kidman is clearly the star and with more screen time than Ferrell, he's the best part of the movie and should have been given more time. His ego-maniacal turn as a former star is perfect and hilarious.

If every television series remake was done with this much ingenuity and talent, they should keep on remaking them, unfortunately, most of them are not. 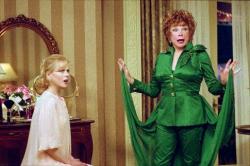 And they should not be. Bewitched reminded me of the disastrous movie version of The Beverly Hillbillies. In that movie it took 20 minutes of screen time to set up a premise that the theme song did in 60 seconds. In Bewitched it takes over an hour to get to the point where Jack finds out that Isobel is a witch.

The fun in this movie only gets going when she lets her secret known. Before that, the movie balances on a tight rope between silly and cute. Kidman spends this part of the movie walking around like an air head with a breathy Marilyn Monroe voice. She is a witch with apparently unlimited power yet she is bored and clueless?