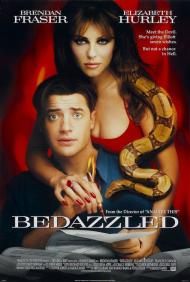 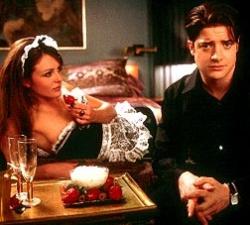 In 1967 the genius comedy duo of Dudley Moore and Peter Cook wrote and starred in the very funny original version of Bedazzled. Harold Ramis has attempted to recapture some of their magic in his remake of this wonderful film. His version has Brendan Fraser and the vivacious Elizabeth Hurley reprising the roles of Cook and Moore. A talented director, two likable and attractive stars, all working on material which has been proven to be funny. Sounds like a surefire hit, doesn't it? Not quite.

If you never saw the original or have somehow managed to miss one of the fifty million previews that have been showing non-stop on television and in the theater, Bedazzled tells the story of Elliot, a helpless soul who desires a woman he works with, but whom he can't obtain. The devil shows up at this point and promises him seven wishes in exchange for his soul. Seeing this as the opportunity to attain his lady love, Elliot jumps all over the deal. The rest of the film tells of the various wishes and Elliot's success and lack of success in each.

The remake is funny and Elizabeth Hurley is very pleasing to the eyes, but this movie lacks any real gut busting moments. I smiled a little, chuckled here and there, but the best and funniest moments were already shown in the previews and thus lost all their impact.

One of the weakest elements of this movie is it's lead, Brendan Fraser. He's supposed to be playing a loser in this film. A geek who can't make friends or work up the nerve to ask out the woman of his dreams. Only, he's Brendan Fraser! Okay, so he's dressed badly, forced to wear glasses (glasses that disappear halfway through the film), and speaks in an annoyingly, ingratiating manner. He's still 6' 2', broad shouldered and in my mind at least, the man who defeated the mummy. I just never buy that he's so desperate he would have to sell his soul to get a date. Dudley Moore, in the original, played the hapless, helpless sap to perfection. I never once doubted his need for supernatural assistance in getting a date.

Harold Ramis, who directed this movie and is best known for directing such classics as Caddyshack, Ghostbusters, and Analyze This, seems to be holding back on this film. His direction is very restrained, when, in my mind at least, this is a premise that calls for going completely over the top. One of my favorite moments from any of Ramis's films is the gopher from Caddyshack. It's just a silly little sequence in an even sillier film. Bedazzled lacks it's gopher, that funny little scene which is included for no other reason than it's extremely funny, and the movie suffers because of it.

Bedazzled (2000) is a light, little movie that entertains on a very shallow level, but never reaches beyond that. If you want to see the same movie done really well, rent the original. On the other hand, if you just want to see Elizabeth Hurley in a whole bunch of different, and very sexy costumes, go see the new version. 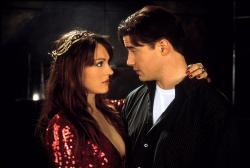 I really agree whole heartedly with Scott's review. Everything he wrote, word for word, is exactly how I feel on this version of Bedazzled.  I have absolutely nothing to add.

This remake is worth a few laughs but it lacks the charm of the original.  Peter Cook and Dudley Moore wrote their lines and spoke them well.   They were old pros together.

Brendan Fraser and Elizabeth Hurley work with what they have, Fraser, "This is breaking and entering!"  Hurley, "I know! It's fun, isn't it?"  As cute as Hurley is and as likable as Fraser is, they simply are bogged down by mediocre lines, Fraser, "Oh, wait! I wish I were the most *emotionally* sensitive man in the world."  Hurley, "Damn. I was hoping you wouldn't catch that. I could've had a lot of fun with that one."

Not only do I prefer Dudley Moore to Brendan Fraser, I think Raquel Welch in her bra and panties is hotter than the gorgeous Elizabeth Hurley in her red bikini.  Do not get me wrong.  Hurley is hot, but Welch's body is just too perfect to compare.  As she once described it, "It's just there, like Mt Rushmore." 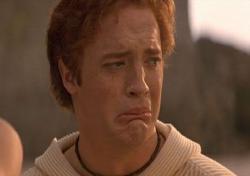 Brendan Fraser as the emotionally sensitive Elliot in Bedazzled.

Who knew Brendan Fraser was so funny? I sure didn't. Although I agree with Scott that he never seems convincing as the lonely loser. A guy that not only can't get a date but one that gets alternately bullied and shunned by his office coworkers. Still he was quite funny in the various scenarios created by his seven wishes. The extremely sensitive and emotional guy on the beach (see photo) made me laugh the most.

This movie was better than I expected it to be. It's always nice when a movie you have very low expectations for turns out to be not so bad after all. Of course it isn't as hilarious as the original version but it is fast-paced and funny. Fraser and Hurley make a decent comic duo.

Some of the gags work better than others. Elliot as a Colombian drug lord produces a few chuckles. Elliot as a stupid basketball player with a tiny penis, and the gay Elliot, not so much.

There are a few lines worth repeating, like when Elliot tells Satan, “But it's my soul! I can't give you my soul.” And she sarcastically replies, “What are you, James Brown?” But my favorite quote is when the Devil tells Elliot, “It's not easy being the Barbra Streisand of Evil.”

Although I would definitely recommend the original version over this one, I have to say that Bedazzled (2000) is much funnier and more entertaining than I ever imagined it would be. 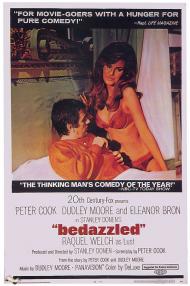