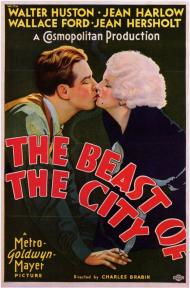 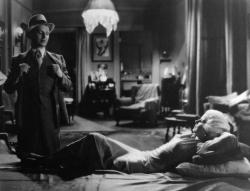 Jean Harlow seduces Wallace Ford in The Beast of the City.

The Beast of the City was another attempt by MGM to capitalize on the gangster film craze that was doing so well over at the Warner Bros. Studio. The gimmick of this film being that the point of view would be from the police rather than from the gangsters. Although the end result is fairly entertaining and almost surprisingly violent, MGM head Louis B. Mayer reportedly didn't feel it fit the MGM image and put it in theaters only as the second-bill of double features.

Walter Huston stars as Jim Fitzpatrick, a police detective frustrated by the rampant organized crime in his city, lead by bootlegger Sam Belmonte (Jean Hersholt). Fitzpatrick is an outspoken cop and a little hotheaded. He's also a family man, with his youngest son played by a very young Mickey Rooney. Living with him and his family is his younger brother Ed (Wallace Ford). Ed has a wild side and he likes the ladies. While Jim moves up the ladder in his quest to bring Belmonte down, Ed finds himself on the wrong side of the law when he takes some kickback from Belmonte so that Ed can keep his girl Daisy (Harlow) in the luxury to which she has become accustomed. It all leads up to a final shootout between the cops and the mobsters in a scene of carnage that leaves the screen filled with corpses.

Although the movie as a whole is entertaining, it is Harlow, as she so often did, who steals the movie in just a couple of scenes, with one of them being a true classic. She plays Daisy, a real gangster's moll. She hangs on around Belmonte, presumably living off of her body. When Ed trails her back to her apartment one day, purportedly to find out info about her boss, but in reality because he can't resist, she seduces him easily, using her body and her natural talents in a way that would never have been allowed after the Production Code became enforced.

This seduction is the highlight of the film. She begins by draping her body, in a form fitting dress, across the sofa as if offering herself to him. She soon gets him drunk on beer and begins to dance for him. The dialogue is equally spark generating. When he grabs her arm at one point, she tells him that it hurts and he says, "And you don't like to be hurt, do you?", to which she replies with sex dripping from voice, "Oh, I don't know. Kind of fun sometimes if it's done in the right spirit."

It is Harlow who instigates the film's climax when she later manages to convince Ed to rob some money that he's meant to be guarding. When Jim, who's now the Police Commissioner, learns of this, it sets him on a violent collision course with the mob. The final scene is a doozy. Not much blood, but plenty of bodies.

One thing that can be said of these early talkies is that they didn't waste much time. This one clocks in at less than 90 minutes, but it manages to pack in a great deal of story and characterization. Modern filmmakers could learn a lot from those of yesteryear.

Louis B. Mayer may not have been proud of the finished film, but fans of Hollywood films of the 1930s, and Pre-Code films in particular, will find plenty to enjoy, especially in Harlow's performance. 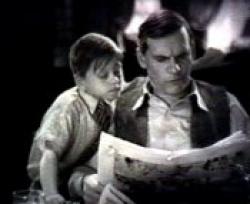 Mickey Rooney and Walter Huston in The Beast of the City.

I'll say the final scene is a doozy! This is what is meant by going out in a hail of bullets. The cops, led by tough-mugged Walter Huston, advance upon the enemy in a straight unwavering line gunning down everything that moves in their path. Harlow's death is particularly unexpected since dames didn't take lead much in old gangster pictures. MGM really went there and I'm not surprised Louis B. Mayer didn't like this picture. The violent vigilante cop action on display here is the antithesis of the glamor and gloss that MGM was known for with stars like Greta Garbo and Norma Shearer.

Nor does it bear any resemblance to the wholesome Americana that Mayer preferred from his studio. The fact that Mickey Rooney, the star that would soon represent MGM to the world through the highly successful Andy Hardy films, made his MGM debut in The Beast of the City, seems almost ironic. He was already a movie veteran at the tender age of 11. He made his movie debut in 1926 during the silent era and had appeared in a series of shorts -some silent, some with sound- in the intervening years. The Beast of the City marked his very first talkie feature film appearance.

I can only agree with Scott about Jean Harlow. She really heats up the screen in a few memorable moments. Daisy's seduction of Ed is the steamiest scene in the picture. My favorite part was when she says, seductively but nonchalantly, “I know, it's a funny thing. You drink beer to make you cool, and it just makes yuh hot.” She then gets up, walks across the room, tugs on the cleavage of her dress and opens a window to catch a breeze.

After pointing out a woman dancing in a neighboring apartment Harlow begins to dance herself. Her movements are filled with sexual enticement. When Ed finally takes her in his arms, she throws her head back and smiles with sexual abandon and delight. The open-mouthed, eyes-half-closed look of ecstasy on her face would be copied and patented 20 years later by another movie star calling herself Marilyn Monroe, but Harlow was Hollywood's original platinum blonde sex symbol.

It's interesting to compare the lives of Jean Harlow and Mickey Rooney, both of whom would become iconic MGM stars in the years immediately following this motion picture. It is proof of the unfairness of fate. Harlow was born in 1911 and she would live only another 5 years after The Beast of the City. By contrast, Rooney, who was born in 1920, is still around making personal appearances and an occasional cameo in a movie a mere 81 years later!

The Beast of the City is both historically interesting and quite entertaining. After the brutal final scene you may find yourself wondering just which beast the title is referring to. At any rate it's pre-code MGM having an identity crisis. This violent cops and robbers yarn featuring 2 soon to be world famous movie stars is definitely worth a look for film buffs. 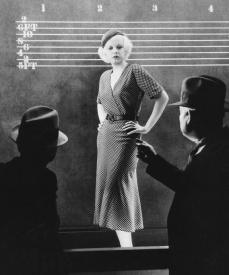 Jean Harlow as a "stenographer" in The Beast of the City

Both of my brothers mentioned the scene with Jean Harlow and Wallace Ford and how it is full of sexual innuendos. When they first enter Harlow’s apartment, Ford looks around the place and remarks, “Stenographer huh?  You must get paid pretty well when you work?”  He then asks her how much Belmonte pays her. She responds that she no longer works for him, “I don't mind taking orders, but there's one decision that's always up to me.”

Jean Harlow had an amazing screen presence. She is decent enough looking but her fake eyebrows are a bit off putting. Harlow had that magical movie star quality once referred to as “It”. She carried herself in a way that demanded your attention.  She could play the good girl or the bad, as she does here, and you still want her.  She was sweet yet brash. “I used to know him pretty well.” means only one thing when she says it.

Harlow steals the movie but there are some good moments without her. I laughed when Walter Huston interrogates the two men who hit his brother. One is a tall dumb mug who explains to Huston, “Chief I don’t know nothing about it.” He practically feigns tears when he adds, “I am trying to go straight.” Look at his reactions during the trial when his defense attorney speaks about him in his closing arguments. Hilarious!

The Beast of the City may have been made to give the police their due, but it also demonstrates why gangster pictures were so popular. Huston plays a completely dull character. I had to force myself to stay awake during much of his screen time. The only ones we find any interest in are the cop who goes bad, the “stenographer” moll and, my personal favorite, the big doofus henchman. I have all the respect in the world for the men of law enforcement, but this movie does not portray them as a very entertaining group of guys..