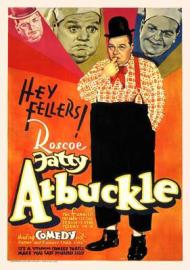 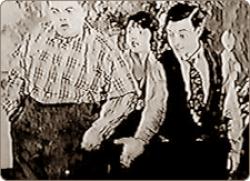 Buster Keaton and Fatty Arbuckle in Back Stage

Back Stage is the best of the Abuckle/Keaton shorts. It must first be noted that this was also not written by Arbuckle. He had desperate need of new material, and he found it.

Back Stage finds Arbuckle and Keaton working at a theater. St. John is also there but his role is very small this time around. They hire a very feminine acting male dancer, played by Jack Coogan Sr, who was the father of, child star, Jackie Coogan. They also have a strongman, who bosses around his female assistant. Arbuckle falls in love with the assistant. It soon becomes clear that they are incompetent and the cast all quits. The assistant sticks around and they decide that "the show must go on" with the four of them playing all of the parts.

The dancer comes to the show to heckle Arbuckle and Keaton's dancing. The strongman shows up and goes into a jealous rage when he sees Arbuckle wooing his assistant on stage. He ends up shooting her, which, of course, causes a huge brawl.

Back Stage has some great sight gags. One of my favorite is Keaton trapped under a pair of barbells. The most notable sight gag, though, is when Arbuckle is singing on stage while the assistant stands behind a fake two story wall, looking out the window at Arbuckle. Keaton, behind the wall, accidentally pushes it over and it falls on Arbuckle, but lucky for him he is standing right where a window is so he goes unscathed. Nearly 10 years later Keaton would perfect that stunt, only he used a real wooden, much heavier wall in Steamboat Bill, Jr. I wonder who first came up with this stunt as Keaton has been given so much credit for it. The writing credit, for Back Stage, goes to a Jean C. Havez, who wrote material for Charlie Chaplin and Harold Lloyd as well as Keaton features. Was the stunt idea his or Arbuckle's or Keaton's? I wonder if anyone knows? 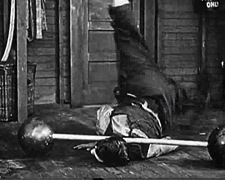 Keaton is as extraordinarily physical as always.

Back Stage has its charm, but after only watching a few of the Keaton/Arbuckle shorts I've started to get the feeling that having seen one, I've pretty much seen them all. They don't seem to be trying to stretch in any of them.

Having said that, this one does have some laugh out loud moments and a few ingenious ones. I liked the star that was moved from dressing room to dressing room on a line so that every act could think they were in the star dressing room. Keaton is as extraordinarily physical as always. He leaps around (in drag for part of the time) and is almost a living cartoon character, as indeed these shorts are really living cartoons. I liked the dumb bell bit, but also how he leaps up to the second floor balcony and rides on the swing up to grab the strong man and drag him back down with him.

One thing occurred to me while watching this short. Why didn't anyone think to use subtitles during the silent era (obviously, they'd had to have invented them first, but you know what I mean)? They used the dialogue cards in between frames, but why didn't it ever occur to anyone to put the lines at the bottom of the frame and have every spoken line written out? There could have been "talkies" years before there were ever talkies.

I have to side with Eric on this one. This is one of the funniest silent two-reelers I’ve ever had the pleasure of watching. Arbuckle and Keaton were a great team. In some ways Keaton’s morose persona worked better as second banana. Arbuckle had such an easy infectious charm about him. It is a damn shame that his career would be ruined by scandal a few years later.

The kicker to the barbell scene is of course that though Keaton was trapped by the weight of it, the strongman’s demure assistant can easily lift it.

The politically incorrect dance by the flaming “eccentric” dancer is one of the truly gut busting moments of hilarity I have seen in a while. The way he drops into the splits before executing an unexpected high kick reminded me of some of the dancers I used to watch in gay clubs back in the 80’s. All that was missing was a pounding techno-house beat. Jack Coogan Sr. steals every scene he is in.

I wonder who choreographed this movie. The dances are the highlight. The assistant playing the Cleopatra character in the show does a wonderfully amusing little Egyptian inspired number. Keaton’s (in drag) dance with the leopard-skin garbed Arbuckle is likewise funny as hell. It is so silly and performed with such abandon by the two of them.

Scott, I’m not sure why they never placed the subtitles at the bottom of the screen during these silent movies. Perhaps they thought it would detract from the picture?

Many of these slapstick comedies ended with outlandish acts of mass mayhem. The finale here is great. Notice how the strongman blithely tosses audience members off the balcony. It even contains a bit of dramatic tension when the girl is shot and I agree that Keaton’s use of the trapeze to attack the strongman was brilliant.

Back Stage shows what a talented cast of comics could do with a very simple premise. Anyone that doesn’t enjoy silent slapstick should watch this movie. It is comedy distilled to its most pure form.