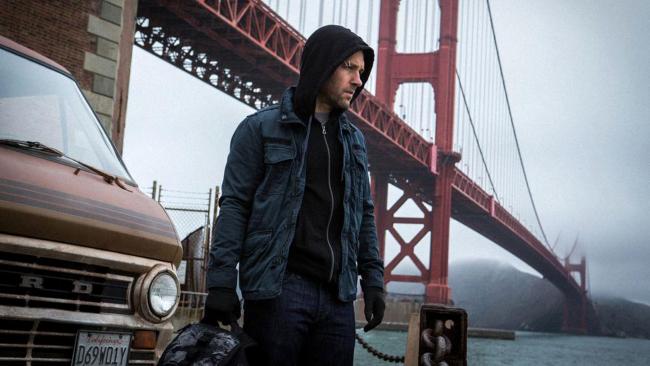 For such a relatively obscure super-hero, or at least one who hasn't seeped into the non-comic book reader's consciousness, Ant-Man had a long, tortured journey to the screen. Writer/director Edgar Wright (Shaun of the Dead, Hot Fuzz, The World's End) began work on the script with Marvel back in 2006, before Marvel Studios became the money-making behemoth that it is today. As the years went on and the script went through many phases and languished in development while Wright worked on other projects, the Marvel franchise took on a life of its own and by the time the film was ready to go into production, the studio was no longer interested in independent auteurs taking control over any of their franchise characters. Subsequently, Wright and Marvel parted ways citing that old chestnut, "Creative differences". In reality, Marvel has transformed into the closest thing we have today to the old studio system and in that system, it's the producer who's king.

The one thing you have to say about those producers is that they've perfected their formula and they've managed to produce another winner with this film. Wright still gets a writer's credit, although it went through several rounds of revision after he left, but reportedly the general plot and tone remains fairly close to his original vision. The tone is humorous, and while it features some nicely choreographed action, it's all kept remarkably light and easygoing. This playful tone is helped by the presence of comedian Paul Rudd, who was one of the writers to work on revising the script, in the lead role. He brings his dry delivery and approachable charisma to the part, while at the same time playing the action scenes believably thanks to some obvious time in the gym.

Rudd plays Scott Lang, a cat burglar who, when the film begins, is just being released from prison. He is recruited by Dr. Hank Pym (Douglas) to take part in a little industrial espionage. Pym was the original Ant-man and he wants to keep the technology he used to create that character out of the hands of his former protege, Darren Cross. Lang is anxious to redeem himself so that he can regain visitation rights to see his young daughter. Pym has daughter issues of his own with Hope (Evangeline Lilly), who resents the distance her father put between them and feels looked over when it comes to her father's legacy.

Essentially, the plot is a heist film. A good portion of the story is Scott training for his big job. Dr. Pym teaches Scott to use the Ant-man suit, which allows him to shrink and grow at will, and retain his full-size strength while small. The special effects used during these scenes of growing and shrinking are quite good and demonstrates just how far CGI has come over the past decade. We now take such scenes for granted. The border between reality and fantasy is now nearly invisible. The filmmakers also make good use of the size differences to generate humor. What seems tense and life-threatening at microscopic size, is just silly at life size.

The script works hard to connect the film to the established Marvel universe. An Avenger, albeit a minor one, makes a guest appearance, as does a Stark. Given that Ant-man was an original member of the Avengers in the comics, it seems that Marvel is keen to put the character in other films, and Rudd has already signed up to appear in Captain America: Civil War. It doesn't seem like too much of a stretch to picture him in Avengers 3.

Ever since Batman Begins, the DC superhero films seem to be getting darker and darker. Marvel tends to keep their films much lighter and isn't afraid to keep their tongue in cheek, while remaining faithful to the original source material. Ant-man is very much in that vein. It's lightweight, often humorous, but also manages to deliver some solid action. It's aided by a great cast. Like its titular character, it packs a hefty punch for a small (at least in Marvel terms) film. 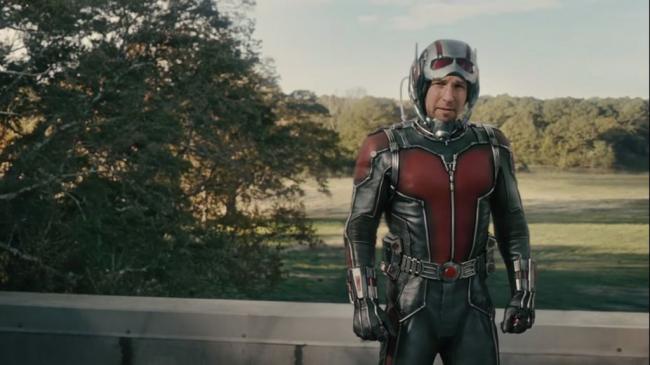 I agree with Scott that Ant-Man is lightweight and occasionally funny. My favorite moment of levity is when Lang swears to Hank, “My days of breaking into places and stealing shit are over! What do you need me to do?” Pym explains, “I want you to break into a place and steal some shit.” Lang smiles back, “Makes sense.” It likewise contains some good action scenes, such as the imaginative and funny sequence involving the toy train set.

Whereas my brother seems to imply that the producers having perfected the superhero genre formula is a good thing, I think it has created a fairly predictable and uninspired movie. Without any knowledge what-so-ever of the Ant-Man character, you know who the bad guy is on sight. You know who the love interest is going to be. You know how the fight is going to turn out. How old is the story of a flawed man who redeems himself and saves the day?

Although every plot point is telegraphed long before it arrives, the journey remains an entertaining, albeit unoriginal, trip. The films light tone and all of the references to the Marvel Universe help keep the fans involved. At one point, Lang tells Pym, “I think we should call the Avengers.” As Scott noted, one member of the Avengers even shows up and gets into a fight with Ant-Man. It has long become a tradition to give a superhero a cameo appearance in another’s movie.

Paul Rudd is one of the most likable actors working on screen today. Because of him you cannot help but root for Scott Lang every step of the way. In fact, this fight is not even his fight. He basically gets hired to do a job for someone else. Eventually it becomes personal when Yellow Jacket uses Lang’s daughter as a hostage, but otherwise, we care simply because we want Rudd to come out on top.

The problem I had with this film is that there truly is very little tension. If Lang had refused to help Pym stop Yellow Jacket, the Avengers, or some of its members, would have.  It may have even been a battle with an army of Yellow Jackets, which may have been more exciting of a battle than what we have here. A Thomas the Train toy train set is worth a chuckle but it does nothing for excitement. Never in the script does Lang seem to be up against a wall to the point that I was concerned for him.

Ant-Man is a bit paint by number but it remains an entertaining enough of a movie, especially if you are a fan of the genre. It’s like a baseball player rounding the bases after hitting one out of the park. We know the path he is taking but it can still be fun cheering him on. 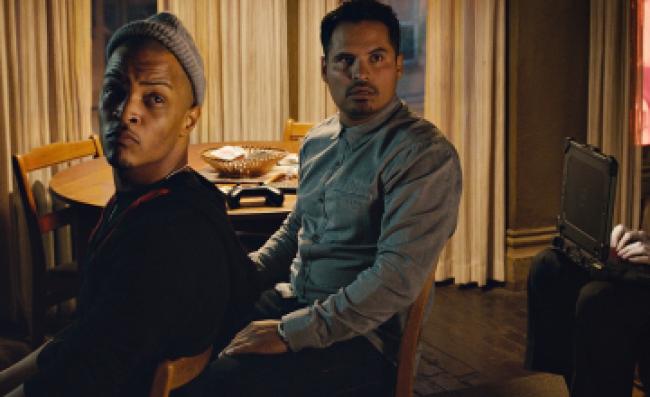 T.I. and Michael Pena in Ant-Man.

I too enjoyed Ant-Man. Superhero movies are always formulaic and this one is no exception. But at least Ant-Man puts a slightly different spin on the genre. As Scott wrote, this is really a heist caper disguised as a superhero movie. Eric wanted more tension and sense of danger, but I liked the fact that the plot to Ant-Man doesn't feature an imminent threat to the future of all humanity. The destruction and carnage is kept to a minimum scale, certainly in comparison to any Avenger or X-Men movie.

Superhero movies are by definition far removed from reality. That's why I've always preferred mine with a healthy dose of camp or at the very least with a light comedic touch. I don't care how tormented Batman is or how much angst Peter Parker feels. If I'm going to sit through 2+ hours of predictable CGI action, I want it to be colorful, fast-paced and funny.

Paul Rudd is excellent in the title role. He's one of the most talented comic actors working today and he also got himself in the best shape of his life for the physical scenes. He gets good support from Michael Douglas, in his best role in years, as the original Ant-Man, Hank Pym. For one scene that takes place in 1989 they used the magic of CGI to shave 25 years off his face. Michael Pena provides much of the comic relief, with rapper T.I. providing assistance.

Like most current superhero movies it does run a bit long. I thought there was room for trimming during the first half hour or so. Once Scott Lang puts on the Ant-Man suit it quickly picks up and remains entertaining right up till the finish. At this point in my life I'm not much interested in the superhero genre. It's always a pleasant surprise when I find myself engrossed in the story while watching one. That didn't happen here but I was at least mindlessly entertained, proving a talented cast and clever direction can go a long way.