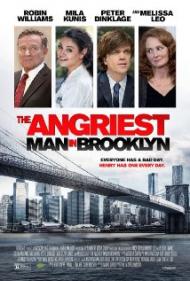 Mila Kunis and Robin Williams in The Angriest Man in Brooklyn.

Although he still had three films in post-production at the time of his death, The Angriest Man in Brooklyn marks the final film of Robin Williams' career that was released before his passing. Ironically, it concerns a man who is dying and who at one point attempts to commit suicide. The script even has him say the line, "My tombstone will read, '1951 - 2014'.", the actual years, it would turn out, of Williams' real life. Unfortunately, these morbid coincidences are the most interesting things about this rather disappointing film.

The script is based on the 1997 Israeli film, The 92 Minutes of Mr. Baum, whose title gives a clue to the structure of the story. Williams plays Henry Altmann, a man who is told that because of a brain aneurysm he has only 90 minutes to live. In actuality, the number was randomly made up by Dr. Gill (Kunis)--who was having a bad day because of the death of her cat, a busy day at work, and her addiction to pills--when Henry badgers her into giving him a number as to how long he has left to live. Henry then tries to figure out what to do with the limited time he has left. Unfortunately, Henry has made rather a mess of his life following the death of his oldest son two years previously. His marriage is in ruins, his law partnership with his brother is suffering, and he isn't speaking to his only surviving son. When he decides to throw a party for the 25 most important people in his life, only one person shows up and the two of them end up in an argument.

Movies have been made with less interesting premises than 'what would you do if you knew you were going to die in 90 minutes?'. It's just too bad the filmmakers don't seem to know what to do with that premise. The tone of the story is all over the place. Is it a dark comedy? Is it a life affirming drama? Is it a story of redemption? It wants to be all of these things, but succeeds at none of them. There are a couple of nice moments here and there, but they are few and far between.

Director Phil Alden Robinson (Field of Dreams, Sum of All Fears) seems to have instructed his actors to shout most of their lines. Williams, who despite the ending of his life, always seemed to be so full of life and manic energy, is miscast here, or at least poorly directed. His film work has always been patchy and this is one of his thinnest performances. His best scenes, as you might expect, are the comic ones. He and the film suffer in the more dramatic moments, although the melodramatic script must bear a large portion of the film's faults.

The rest of the cast is filled with a surprising amount of recognizable faces. Mila Kunis is quite good as Dr. Gill. In fact, she spends most of the movie acting above the script, delivering lines with real emotion and doing her best with the weak material. Peter Dinklage plays Henry's brother, while Melissa Leo plays his wife. James Earl Jones has a tiny part as a stuttering store clerk while Louis C.K. makes a cameo appearance as the married doctor with whom Dr. Gill is having an affair. Broadway star Sutton Foster makes an appearance as Henry's son's girlfriend. All these recognizable faces do provide some distraction from what's actually happening in the story, but it doesn't help all that much.

At the very least, the film's message is a positive one. If you knew you only had 90 minutes to live, you'd want to spend it doing the things that matter and you'd try to make those 90 minutes count. In reality, while none of us know how long we have in this life, we do know that we're all going to die. We shouldn't waste the time we're given being angry or bitter, or watching crap movies like this one.

Hamish Linklater and Robin Williams in The Angriest Man in Brooklyn

One of life’s biggest clichés, especially if you have reached a certain age, is to live life as you never know how much time you have left. How many times have we all heard such sayings as, “Stop and smell the roses.” “Do not worry about the things you do not have, enjoy the things you do have.”  “Live like you were dying.”?

The Angriest Man in Brooklyn wants very much to teach us that very well worn lesson. It is a worthwhile one but, as any good teacher knows, if the students are not paying attention, all is for naught. Although I understand it is the point, Henry Altmann is not a likable character and thus we do not actually root for him through much of the movie. He has made huge mistakes in his life and we are intended to want to see them rectified. He has suffered but he has also made others suffer so his personal pain seems like deserved penance.

I never wanted to see Henry kill himself and hoped him and his son Tommy would reconnect before it was too late, but not enough as I should have. We have little history and motivation for Henry to basically disown his son. He is scarred over his other son’s death and Tommy’s career choice but how selfish does that make Henry? Again, Henry kind of deserves the sad life he finds himself in.

The narration by Robin Williams and Mila Kunis are not as clever or acute as they are meant to be. “When Henry Altmann fell from the bridge time had slowed. And it occurred to Henry that life didn't have to be a burden, that life is short and fragile and unique. And each hour, each minute, each second could have something to offer. Something beautiful and astounding. The fact that this only occurred to him seconds before he would hit the water and die, made him very very angry.”

Was it intended to be funny when Henry’s wife Bette yells at him, “I wish you were dead!” and Henry barks back, “Well, it's your lucky day!” The scene where he buys the camcorder likewise left me cold. A stuttering salesman waiting on a man with minutes to live! Really? “F-F-F-F-Fuck you.” I appreciate dark humor but this film never works as such.

The most insightful line in the entire film is when Peter Dinklage  says, “The only normal people are the ones you do not know.” Every family has problems and idiosyncrasies but we do not see them from a distance. The Altmann’s are more the norm than the exception. A stubborn aging man learns he has little time to make amends. How many of us know someone like this? How many of us in some way feel like this. That is, of course, the film’s point. We all need to make amends and enjoy our family and time as we never know how much life we have left. You know…that old cliché. 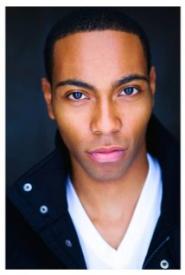 I have mixed feelings about The Angriest Man in Brooklyn. Like Scott I found it uneven in tone. It wants to be both a dark slice-of-life indie comedy and a feel-good Hollywood melodrama. I agree that it never completely works as either but it does contain a few laughs, a couple of tears and several moments of truth. Eric, the punchline to Henry's speech that you quoted about dropping from the bridge is brilliant and funny. Talk about irony. As he's about to die he finally learns the secret to bliss, and it pisses him off. I laughed out loud.

The reunion scene between father and son moved me. I thought it well-written. The son brings up a memory about them together on the Brooklyn Bridge from years ago. He asks his father if he remembers it, not knowing his father was just there reliving it in his mind. Henry pretends not to remember and Tommy tells him they danced. Something about the way Robin Williams says, “Did we?” instantly got to me. I know, I know it's schmaltzy as hell, but it worked. I was momentarily choked up.

The problem with The Angriest Man in Brooklyn is the fact that Henry and Dr. Gill are two real people living in a Hollywood movie version of Brooklyn. All of their little escapades seem to exist in a bubble. They shot it on location but the real world is kept at bay. The only time other people are close by them is when they need to interact with a supporting character. And the script seems to think it's funny when Henry gets picked up by the same cabbie twice in one day. That gag was tired when Barbra Streisand used it in The Mirror has Two Faces 20 years ago.

I disagree with Scott about Robin Williams' performance. For once, I liked him doing the dramatic moments more than the comedy. I thought the scene where he records the message for his son was particularly good. I believed every word he said. It begins as a heartfelt message before quickly morphing into a rage-fueled rant, “Anger is the only thing they left me. Anger is my refuge, it's my shield. Anger is my birthright!” He's seriously pissed off at the universe.

But once again it contains a moment of genuine emotion in a scene that only happens in Hollywood. Now it might not be politically correct to say this but the portrayal of Leon, the happy, healthy-looking, mentally-stable, relatively clean homeless man doing the recording was unlike any homeless person I've ever come across in nearly 15 years living in Brooklyn. First of all they cast the gorgeous Jeremie Harris (see photo). This guy looks like he came from central casting. He could be a model for god's sake. He makes as believable a homeless person as Julia Roberts did a hooker in Pretty Woman.

Although I enjoyed this movie more than either of my brothers did, the best I can say is that The Angriest Man in Brooklyn is equal parts hit or miss.