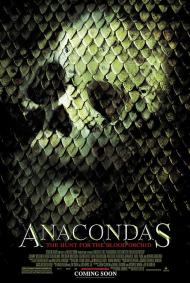 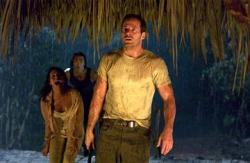 Salli Richardson, Karl Yune and Johnny Messner in Anacondas: The Hunt for the Blood Orchid.

Everything about Anacondas: The Hunt for the Blood Orchid is second rate. It has a cast of second rate stars (Morris Chestnut being the only recognizable name in the bunch), second rate special effects, second rate stereo-typical characters, and a second rate script that features virtually no surprises. It plays like a direct to video feature, and yet in spite of – or because of – its obvious cheesiness, if you're in the right mood, there is some enjoyment to be had in watching this B-movie.

Following the discovery of an orchid, which seems to hold the promise of a Fountain of Youth, a group of scientists journey up river in Borneo to gather more of the precious flowers. Since they only have one more week to reach the flower before it stops blooming for another seven years, and since it is the rainy season, they are forced to hire a down and out American Captain and his run down boat. Things begin to go awry when the engines fail and the boat goes over a waterfall, stranding the group in the jungle during Anaconda mating season.

Shortly thereafter, the Soap Opera quality characters begin dropping like flies as they're turned into snake food one by one. The only real question is in which order will they be eaten. Will it be the evil British scientist? Or could it be the young, wise cracking black guy? Or how about the former Special Forces, now down on his luck, ship's captain? While you certainly won't care about any of them, it is entertaining to watch them go, at least some of the time.

Quite obviously filmed on a limited budget, it is the snakes themselves that suffer the most. The CGI quality is quite poor and it is too obvious that the snakes aren't really there. Because of this, the filmmakers wisely kept the number of times you actually see a full snake to a minimum. However, this does mean that you've got several scenes of the actors just sitting around and talking.

While you might not want to spend the money necessary to see this one in the theater, sometime in the future when it's showing late at night on some obscure cable channel, or when you can't find anything else to rent at the video store, you might give this one a chance. On the small screen the effects might not seem so bad, and in the privacy of your own home you'll be able to have a few drinks, which won't hurt your enjoyment either. 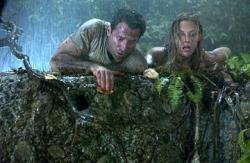 Johnny Messner and Kadee Strickland in Anacondas: The Hunt for the Blood Orchid.

My favorite character is rough and tough, down on his luck, unshaven Bill. As played by Messner, he is Charlie from The African Queen by way of a GQ perfume advertisement. These are all soap opera characters because they are all good looking youngish people with little to no personalities. In The African Queen, Charlie and Rose come across real because they have flaws in their personalities as well as bad hair. This movie even steals the famous leeches scene.

With nothing else to watch I enjoyed this movie on the mere fact that I had nothing to do but wait for the next kill. The movie did not engage me in the least and I really did not care who lived or died. The film should have centered completely on Bill and Sam. If the film makers could have created some emotional/sexual friction between two of these people I may have cared more about them surviving.